Part of 4 of in
by Young Lee Hertig
illustrations by TRISHA KIM
Jul 01, 2015 | min read
Part of 33: Black Lives Matter
0 Snaps
0 0 Snaps
Oops! Something went wrong while submitting the form.

ON NOVEMBER 6-7, 2014, The Institute for the Study of Asian American Christianity (ISAAC) organized our sixth annual symposium — and Los Angeles’ first-ever symposium between Asian American and African American faith leaders.

The Symposium was titled “A Christian Vision of Belonging: Race and Gender” and featured Rev. Dr. Willie James Jennings from Duke Divinity School as the keynote speaker. Dr. Jennings, along with 13 other speakers, brought groundbreaking theological imagination to LA as he tackled the ongoing struggle to break free from mainstream Eurocentric theology and move toward a theology shared by all the people of God.

A Call to Bridge Communities

From 1998 to 2002, I had taught at United Theological Seminary (UTS) in Dayton, Ohio, a school renowned for equipping African American pastoral leaders. While there, I encountered some of the spiritual giants of the African American community.

UTS’ Doctor of Ministry intensives were a spiritual oasis for me, helping me to break free from the narrowly defined “colorblind” theology of mainstream seminaries. This cohort program was founded by Rev. Dr. Samuel Proctor, who based the form on a communal pedagogy he observed in Asian American students. “After school,” Proctor noted, “all Asian students do their homework together whereas Black students do their work alone.” For me, this inspired a cross pollinating movement to bridge our two communities.

Out of such a soulful experience of African American spirituality, I dreamed of a way to share it with Asian American faith leaders. After leading five annual Asian American symposia, God whispered in my heart three simple but powerful words of inclusion, “Not Just Us”. I kept those words close to my heart and was again nudged by the Holy Spirit in 2014, “Not Just Us”.

From that moment on I stepped out in faith and courage to organize a bilateral symposium between African American and Asian American faith leaders. Yes, it was indeed a bold move as an Asian American woman! What continued to compel me is the fact that we rarely learned from each other. As a result our stories and spiritual legacies remained segregated and alienated from each other.

Within my soul, I found myself praying, How long are the people of God going to remain voluntarily segregated on Sunday at 11:00am? How long are we going to remain deficient because of our voluntary alienation from each other? I refuse to remain segregated and alienated against God’s own heart. Together we can accomplish the greater mission of God, a mission after God’s own heartbeat. Would you join us in this bilateral movement of the Holy Spirit, which nudges for mutual learning and mutual empowering to transform our cities together?

How long are the people of God going to remain voluntarily segregated on Sunday at 11:00am?

I’ve often awakened early, trembling in the face of this Goliath-like task to bridge the Asian American and African American faith communities. It was the quiet but firm whisper of the Holy Spirit that anchored me daily.

Convergences of Past, Present, and Future

My teaching career and the Los Angeles Riots coalesced as I became the first woman of color to join the faculty at Fuller Theological Seminary. I witnessed the mom-and-pop Korean immigrant stores burning as the result of Blacks angered by the unjust verdict of Rodney King.

During those early years, I was the only Asian American faculty from an evangelical institution and therefore found myself dismissed by the progressive, feminist Asian American female scholars. It was ultimately an African American scholar, Dwight Hopkins, who took me into his group at the American Academy of Religion and shared the nuts and bolts of navigating the academic terrain and inviting me to observe his negotiations with his book publisher. Dwight was among my dearest friends and allies as I was bombarded with institutional challenges in the early ‘90s.

It was then that I happened to run into an old classmate of Dwight’s from Union Theological Seminary, Elder Oscar Owens of West Angeles Church of God in Christ. In Oscar, I discovered a true spiritual coworker. We connected instantly, discovering how many friends we shared and becoming prayer partners for the bilateral symposium.

Because of my work at UTS, prodigious for producing many Black pastors through their doctor of ministry program, I met many Black spiritual giants who were also in Elder Owens’ circle. My encounter with Elder Owens took place when I was overwhelmed with a sense of reality.

As a woman of color, how could I break through the walls of African American and Asian American churches?

I believe that past experiences converge with the present and future. Rosalie Bertell described it succinctly, saying, “As we grow older, our own experiences become the fuel to fire our passion.” Indeed, I thanked God frequently when people from the past showed up favorably in the present moment because I served them in the past. This is why every encounter matters. What goes around comes around.

My personal story includes crossing the Pacific Ocean and leaving Seoul, Korea for St. Paul, Minnesota. With my master’s degree in counseling psychology from Yonsei University and a clear sense of who I was, I brought with me a commitment to cross boundaries and stay connected to the marginalized.

In America, this conviction brought me to a place of solidarity with the Black community of Dayton, Ohio. From 1998 to 2002, my family and I lived in a Black neighborhood. Despite the urgings of our realtors against our decision, my spouse and I consciously chose this neighborhood as part of our commitment to teaching urban ministry. Living there, rather than just visiting or reading about it, offered me a deep sense of connection.

We experienced the economic despair of our neighborhood firsthand. As “white flight” took place, those who stayed lost all of the equity in their homes since property values were based on skin color. We saw houses in the neighborhood sit empty and boarded up.  Concurrently, as property tax revenue dwindled, our underfunded school district drove our educational system into a vicious downward spiral. Indeed, these consequences continued to affect me, even after moving away.

Despite the challenges of being a trailblazer, I’ve come to see that one never knows where help will come from. The key is to persistently move forward despite despair. I find two factors that turn my despair into hope again: courage and divine encounters.

Rollo May, in “The Courage to Create”, quoted the existential philosophers: “Courage is not the absence of despair; it is, rather, the capacity to move ahead in spite of despair.” Along with courage, what made it possible for me to move ahead were a series of perfectly timed divine encounters, events beyond my control or planning. My chance connection with Oscar was just one of many countless divine encounters that have kept me moving forward.

Heart of an Entrepreneur

Coming full circle, ISAAC fulfilled a dream that began in 1981 when I was a young seminarian. It was then that I first encountered the narrow and non-inclusive Eurocentric seminary curriculum. These early experiences started me on my journey to champion the cause of bringing the stories and experiences of the excluded into the theological academy.

More than three decades after my seminary days, I’m saddened to report that many of the same issues that I faced 35 years ago continue to persist as the problems of an entrenched Eurocentric curriculum are compounded by a lack of mentoring from first generation pastors and a lack of collaboration among Christian communities.

Many of the same issues that I faced 35 years ago continue to persist.

For over a decade, I tried to impact this situation from inside the seminary system as a full-time faculty in mainstream seminaries. But I found the classroom limiting and itched for something more. In 2002, I gave up my endowed chair position at United Theological Seminary and returned to Los Angeles to implement my dream of an inclusive and embodied learning community. In April 2006, I joined with others who shared this common vision to launch ISAAC.

But I found the classroom limiting and itched for something more.

I now consider myself a theological, ecclesial, and missional entrepreneur, using my academic and pastoral experiences and talents to develop programs that match people’s gifts with the needs of our cities. I seek to develop the gifts of Asian American Christian leaders in three stages: 1) filling the knowledge gaps in Eurocentric seminary education; 2) inspiring a calling for something larger than personal agendas; and 3) helping unleash their dreams and visions. To realize this goal, I launched ISAAC’s Annual Symposium in 2009 as a unique learning forum for Asian American leaders.

It’s been a privilege to serve my community as a knowledge activist for our Asian American faith legacies, working alongside the powerful spiritual traditions of allied communities to forge ahead in the great movement of social change. 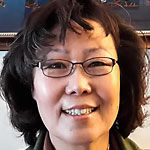 Young Lee Hertig is a co-founder/executive director of the Institute for the Study of Asian American Christianity (ISAAC) and a founder of Asian American Women On Leadership (AAWOL). She has been teaching in the Global Studies and Sociology Department at Azusa Paci c University since 2002 and is an ordained Presbyterian clergy.