Come and Stay a While

Aspiring to Be Neighborly

Part of 2 of in
by Joshua Lee
ILLUSTRATIONS BY TERRY YANG
Aug 01, 2016 | min read
Part of 46: Proximity
1 Snaps
1 0 Snaps
Oops! Something went wrong while submitting the form.

My eyes shoot open at the unmistakable sound of gunfire and the squeal of tires. It's after midnight. After I make sure my wife Melissa is unharmed, I turn to our 1-month-old baby boy.

Scenarios flit through my mind, and an acidic tang of dread rises in the back of my throat. My hand trembles as I softly touch his back. Relief floods through me as I feel his breath rise and fall peacefully — thank You, Jesus; he's fine.

The next morning, neighbors huddle in front of a bullet-riddled house, gawking at the shattered windows. Two houses down from us, a 24-year-old woman was shot in the head and neck while two children slept in an adjacent room. I feel utterly helpless and useless. Inwardly, I wonder, "Lord Jesus, what are we doing here?"

I feel utterly helpless and useless. Inwardly, I wonder, "Lord Jesus, what are we doing here?"

Melissa and I moved to this neighborhood five years ago, partly to be closer to our church, but mostly because we believed Jesus called us to participate in the story He is writing for the city of Hayward, California.

Chinese for Christ Church of Hayward bought its property here in the 1980s. It was affordable and accessible, but it wasn't in the safest neighborhood. Over the years, gangs have graffitied our buildings, drug deals have openly occurred across the street, and we've become accustomed to break-ins and thefts.

As the church grew, newcomers seeking community traveled from further distances, and upwardly mobile members gravitated to more secure, suburban neighborhoods. Over time, we became a "commuter church", where most of our members drove in on Sundays from outside a 20-minute radius. The disconnect between our middle class, Asian American church and the surrounding low-income, Latino and Black community became increasingly apparent.

In 2001, I started praying that God would give our church spiritual influence over two city blocks in the surrounding neighborhood. But the next seven years of neighborhood outreach and programs only yielded unpleasant lessons in humility and futility. Frustrated, I asked Jesus, "Why is there still no lasting impact of Your presence in this community?"

An inaudible conviction, louder than any spoken voice, responded, "Because none of you live here."

An inaudible conviction, louder than any spoken voice, responded, "Because none of you live here."

Nodding my head vigorously, I pled with Him to raise up Christians from within our church and community.  Then, clear as day, God said, "You first."

I'm pretty sure I meant other Christians.

Melissa and I felt humbled and awed by His calling, but we wrestled with people's well-meaning concerns over the next two years. Is the school system good? Is the area safe? You have a wife and kids.

Doubts crept into our hearts, so we prayed more fervently until God's peace and guidance came. We realized that these were all real concerns, but what if there were more important factors — Kingdom-sized values — to consider?

These were all real concerns, but what if there were more important factors — Kingdom-sized values — to consider?

God wanted to do something in this city, and we wanted to be a part of it. We didn't want to settle in the safe margins anymore; we longed to be in the center of His will for us, even if it appeared unsafe, unwise, and unprofitable.

Our Master unveiled hope and grace to people through relational presence and proximity. How could we not do the same? The more we prayed, the more we realized that the Church couldn't just be a program projected from a distance. We needed to become people connected in community — not tourists, but committed residents. We needed to plant roots; we needed our neighbors to know that we were here to stay.

We shared this vision with five of our closest friends and began to meet regularly to pray and study the neighborhood — to understand its people and its needs — together.

Six months later, I drove past a house just down the street from church. There was a nondescript realtor sign on the lawn.  After a brief email to my wife, her rabid research, and a lot of prayer with friends, Jesus opened the door. A whirlwind process ended with us signing papers and moving into our new home.  That first week, Melissa looked me in the eye and asked, "Do you know where we live?"

I wept with praise over the clear answer to dusty prayers spanning 10 years.

As an introvert, building fences and distance has always come naturally to me, often under the guise of busyness. Initially, my interactions with neighbors began and ended with brief acknowledgments of shared existence as the vault of the garage door closed behind me. But it's hard to love your neighbors when you hide from them.

I was haunted by Scripture's familiar command to love your neighbor, yet often found myself echoing the religious lawyer in the parable of the Good Samaritan: "And who is my neighbor?"

It's the wrong question to ask; it implies that someone is not. Are you like me? Are you near me? Do we share the same zip code, dress code, or pay grade? No? Then you're not my neighbor. The question categorizes people, rationalizes exclusion, and justifies my distance from them.

In response to the religious lawyer's question, Jesus asks, "Which of these ... proved to be a neighbor?" With one question, He masterfully brushed aside the lens determining who is or isn't a neighbor. Instead, He held up a mirror: "Be a neighbor."

Whenever I reflect on this parable, I squint to look over the spiritual features of my heart. Being a neighbor requires intentional commitment and movement toward others: physical proximity to engage them, spiritual humility to value them, emotional vulnerability to care for them.

Being a neighbor requires intentional commitment and movement toward others: physical proximity to engage them, spiritual humility to value them, emotional vulnerability to care for them.

Jesus gave us our first lesson in being a neighbor without requiring us to leave our property. One afternoon, as I surveyed our overgrown backyard, I glimpsed a hand pop out of our shed to dump the contents of a cup. I tiptoed over and knocked. A man was lying on a makeshift bed, surrounded by bags of clothes and half-eaten canned goods. I discovered that Al was unemployed and had been living here long before we moved in. The house appeared abandoned; the shed was unlocked and insulated; he had found a safe haven from winter's bite.

As he started to pack, I heard Jesus' words: "Which of these proved to be a neighbor?" The words tumbled out before my heart was ready: "You can stay for as long as you need."

Over the next few months, we shared groceries, toiletries, and stories. Then came the day when Al timidly knocked on our door for the last time. All of his earthly belongings were loaded onto his bike. "I got a job, and a friend is letting me crash at his place ... I didn't want to leave without saying thanks."

We often choose who our neighbors will be based on similar income, values, and lifestyle, but if we're open to it, Jesus chooses us to be a neighbor to someone else.

We often choose who our neighbors will be based on similar income, values, and lifestyle, but if we're open to it, Jesus chooses us to be a neighbor to someone else.

Just past our property line is a nursing home, which provided yet another lesson. I was chagrined to discover that residents like to park their wheelchairs on our driveway to smoke. I do not enjoy picking up cigarette butts. Our housemate, Dustin, suggested, "What if we provided a big coffee can as an ashtray?" Rather than fortifying my heart and home, the can became a daily reminder for me to practice Jesus' embrace as neighbors. One wheelchair-bound lady hung out often, but not to smoke; Robin just loved the sunshine and push-cart vendors. Dustin first met this fiery redhead while advertising free car washes at church for the community. Robin loved the idea so much, she parked herself on the corner to promote it. She came to love neighborly Christians so much, she started coming to church. Then, she came to love Jesus so much, she committed her life to Him. I had the privilege of baptizing her, the first of three of our neighbors — our friends — who would come to follow Jesus and be baptized into our church family.

Since then, more church members have moved into the city (some of them even in our home for a season) to be closer to our church and neighborhood. Neighbors are also slowly moving into our church family.

Is this the nicest neighborhood? No, but it's our neighborhood. And it's changing because Jesus is here, and His people are following. We are not colonials staking a claim over a conquered territory in spiritual gentrification; we are neighbors learning to draw close to people like Jesus does. We're still figuring out what that means; please pray for us. But in a community where every property is fortified behind intimidating, isolating gates of iron and steel, in front of our home, there is no fence. 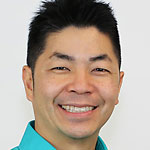 Joshua Lee is a pastor at The Crossing, the English-speaking ministry of Chinese for Christ Church of Hayward. He and his wife believe that the Asian American minority church has a unique role in reaching and joining other outsiders to experience and follow Jesus together. He loves basketball, “Transformers”, comic books, his wife, and their two kids, Indigo and Violet.

Terry Yang was born in 1992 in Los Angeles, and earned her BFA in illustration from the Art Center College of Design. Terry Yang’s paintings feature hidden figures displayed in observational journalism of household diaries and outdoor expected behaviors, ruling to serve a break in the border of rejection and disbelief.