Eating as the Initial Rite of Acceptance

When Kevin entered a new cultural setting, he looked forward to learning about Filipino culture by hearing everyone share their stories. But the stories would have to wait until he learned to share their food.

Still navigating the labyrinth of the church, I finally found the church kitchen. This was familiar to me: a high-octane stove vent, two large, rounded cast irons also known as woks, endless bottles of cooking sauces, and the most satisfying smack of sour, spice, and tang in every breath inhaled in the atmosphere. Even with obvious differences between the Filipino and Chinese church, the similarities were uncanny.

As the aromas filled the dining hall, I followed my nose to a golden stew fresh off the stove with okra, green beans, tomatoes, onions, and pork on the bone all floating in a soup base made with vinegar and tamarind. What is this? I asked. This is sinigang! Try it!

I dipped my spoon in for the first bite. As the flavors melted on my tongue, the perfect balance of sour and savory played on my heartstrings, wrapping me with the iconic warmth and affection characteristic of the Filipino people. Mmmm, ma sarap! Very good! Just as cultivating an appetite for food begins early in the Filipino community, so does cultivating a posture of acceptance, something I would come to experience personally in this new community.

After spending most of my life in Chinese churches, I had just walked into my first pastoral position in a Filipino American church. As I transitioned to my new home, my excitement had built to a crescendo of emotions. I wanted to dive right in, asking questions and exchanging stories. Who were these people? Where did they come from and what journey brought them here? What were some of the ethnic traditions they had preserved, and what had been cast aside? What measures did they take to make these preservations? How did these traditions demonstrate their values?

In my limited imagination, culture was to be spoken and transmitted in language through stories. And although I was not wrong to assume that culture is learned through stories, I was wrong to think that an outsider like myself would have access to those stories. An individual’s stories are like deep vaults of locked treasure in their hearts. They are intimate. Until trust has been proven, no amount of inquisitive clawing or good intentions can culminate in story sharing.

In my limited imagination, culture was to be spoken and transmitted in language through stories.

Throughout my time journeying with my Filipino community, food became a common reason to gather. It was always the first item on the agenda. At any Filipino gathering, it was more common to have a tita coming up to me demanding that I eat than it was for one to ask how I was doing. This did not mean that a person’s wellbeing was secondary, but rather, being raised in a land of want, ensuring someone had enough to eat was central to their well-being!

In this community, I tasted dishes that most palates would find easy to adjust to like chicken adobo, pancit palabok, and arroz caldo. But there were also dishes that were harder to stomach for a Western palate. Often, after devouring dishes like dinuguan or sisig (dishes with chicken or pork innards), I would look up to a very earnest tita asking, did you like it? Once I had tried a dish my palate truly was not ready for, and it left me with a loss of appetite. Distraught, my host attempted to offer another dish that would be more accommodating, while trying to cover up her discouragement. With the lingering taste on the tip of my tongue, I kindly declined, hoping that she would understand. Deep down, I knew that there was no way to coalesce from that immediate reaction.

When in college, I had invited a friend unaccustomed to Chinese cuisine to my favorite restaurant in Chinatown. Soup was offered as a fixed item to our orders. A three-pronged chicken foot was submerged with diced carrots and potatoes. His appetite dashed off into the distance, exactly as mine had after tasting the Filipino dish. It was unintentional, and yet intent could not have changed the rejection that I had felt. The tita was also inextricably connected to her food. The culture found in those flavors was the very culture that was in her. I do not like your food, but I accept you completely was an oxymoron.

The culture found in those flavors was the very culture that was in her. I do not like your food, but I accept you completely was an oxymoron.

Food does not only signify culture or transmit culture; food embodies culture. When the predominant form of communication is lost through linguistic differences, a rejection of dominant culture communicators, such as food, becomes a rejection of the culture itself, despite the best intentions. Since the table is the very initial place of cross-cultural encounters, the table itself is the initial place where trust is made to progress or to set back. Not only is the table a place of both acceptance and rejection, it is also where the foundation of intimacy is built. For those mute in common language, acceptance meant eating their food — even if it required a little research in preparation for the meal.

Like Filipinos, the Chinese also pride themselves on their cuisine. My upbringing was steamed in the seemingly unlimited amount of cultural flavors. Whether it was garlic dou miao (pea shoots) or siu aap (roasted duck), yu choy or long xia (lobster), food seemed to have a magical, medicinal cure for even the worst of days. One night my father prepared a family staple — scrambled eggs with tender chunks of tomato coated with a thick red sauce that balanced flavors of sweet, savory, and sour. As I stuck out my chopsticks to grab my first piece of tomato, something clicked in my head.

How was my father able to prepare such a delicate dish with such menial ingredients? We used to eat this in the village when we were poor. If we were lucky, we would have a whole chicken for the New Year. Don’t even think about fresh catches of meat from the sea. We had to make use of the food we had. Never before had I appreciated eggs and tomatoes more than in that moment.

Despite endless cultural differences that separated my father and me, the table had the ability to create sacred, reconciling space. Because in a world that was wholly other from my father’s, the table was wholly his. Dishes like these opened the doors for my parents to share with us their experiences of a history of national poverty and civil warfare that they otherwise would have swept under the rug. Dishes like these provided the aperture for us to discover cultural meaning through another’s story.

Despite endless cultural differences that separated my father and me, the table had the ability to create sacred, reconciling space.

Filipino dishes are no different. These concoctions spoke both of their Spanish colonial history and their intermixing with the Chinese. Dishes like chicken adobo and caldereta walked right off the page of the Spanish culinary lexicon. Pancit and lumpia are two of the many dishes that marked the undeniable influence of the Chinese. A further look into its culinary influences will point to the landscape of enterprise in the Philippines, the religious and spiritual landscape, and even offers a glimpse into their relationships with these nations to this day.

At the blink of an eye, my journey with the Filipino church has led me from Northern Jersey to Queens, New York. Due to linguistic barriers, my interactions with some of the titas and titos in the church are merely the acceptance of a plate of food on Sunday mornings and Wednesday evenings at the kitchen window. In each of these moments, the same tita would dump an extra scoop of each dish onto my plate muttering, I know you like this. In each of these moments, I would see her bouncing heartwarming glances at how quickly I would finish what she had prepared. If eating can communicate the acceptance of a person, and eating is all I could do to relate with this tita due to our linguistic barriers, then eating is enough.

Each time I find myself crossing into a different culture on the table, the words of Jesus echo in my mind. On the night that He was betrayed, Jesus took bread and broke it. This is my body broken for you, do this in remembrance of me. Then He took the cup, and when He had given thanks, He gave it to them, saying, Drink from it, all of you.

On this ancient table, grounds for intimacy were laid ages ago. On this same table today, we continue to reaffirm our daily trust and acceptance by simple practices. We take and we eat. Only then are we invited to share in the story.

We take and we eat. Only then are we invited to share in the story.

Kevin Hu is a Chicago native and Brooklyn transplant. He has in the past lived in, been nurtured by, shepherded, and served in immigrant church communities. He is a writer, son of immigrants, fiction-reader, storyteller, and software engineer. You can find him at kevinhu.dev for more information. 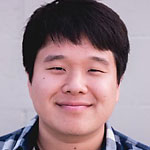 Juliano Yi is a game artist in Los Angeles, CA, just trying to do the quiet life, and figuring things out with art and Christ. Find him online at juyi.artstation.com.