Part of 5 of in
by John Riley with Kate Suriyatip
ILLUSTRATIONS BY KIN LOK
Aug 01, 2015 | min read
Part of 34: Have You Eaten?
0 Snaps
0 0 Snaps
Oops! Something went wrong while submitting the form.

Don’t let that 4’11” frame fool you — Kate Suriyatip, a self-proclaimed Thai-Texan who moved at age nine from Thailand to Texas and now lives in Southern California, can more than hold her own when it comes to food. And yes, she also happens to be my girlfriend.

After moving to Malibu, California for her undergraduate studies at Pepperdine University and doing a study abroad program in Florence, Italy, you can bet that she’s experienced a variety of cultures — and what would experiencing culture be like without food? Coming from Thailand, a country that is renowned for its cuisine, to Texas, where everything (including portions) is bigger, was a huge culture shock.

She reminisced about her experience in Texas. “I adopted some unhealthy eating habits — I would binge eat large portions. I was surrounded by cowboys who could eat! I wanted to be able to keep up and would overeat just to clear my plate. It was socially acceptable to eat, eat, eat — and there was no shortage of fried food.”

During college, Kate had a roommate that went through etiquette school and would give her informal lessons in their dorm room. Kate was taught that it was actually polite to leave a little bit of food left on your plate to show manners and respect by not cleaning your plate. This etiquette lesson outright defied everything that Kate had understood about food, from her childhood in Thailand to her teen years in Texas.

Kate wasn’t fed the story about starving people in China or Africa in an attempt to guilt her into finishing her food. In Thai culture, people believe that food should not go to waste. “We are gifted with the food and those who prepared the meal took a long time to prepare it, so you should finish your food and not be wasteful.”

“We are gifted with the food and those who prepared the meal took a long time to prepare it, so you should finish your food and not be wasteful.”

“My mom assumes responsibility to make sure I’m adequately fed, yet holds me to the Thai standard of beauty for women: light skin, skinny or slender build, straight hair, non-muscular body. Women in Thailand are known to have colored contact lenses different from their natural eye color, double eyelids, and plastic surgery, typically nose jobs and breast augmentation. It’s not too different from beauty expectations from other Asian cultures. Plastic surgery in Thailand is very affordable and they look to South Korea as the commercial standard of beauty, much like Americans would look toward film and TV for idealized beauty.

“I find it hypocritical — she tells me to eat and eat more, then tells me I’m fat.”

Now, it has come to the point where her mom tells her what to eat and what not to eat. Sometimes she’s correct with her reasoning and rationale for the advocacy or abstention of certain foods, but often she second-guesses Kate’s nutritional choices.

I recall an afternoon eating Thai food with Kate’s family after church. I would have been content with my own entrée, but since her mom was getting out of her seat to speak with her friends, who happen to be the wait staff, I didn’t know what was going on or what was being said. So, when plates of food came out that Kate and I didn’t order, we only had to look at Kate’s grinning mother, content with stuffing our bellies and seeing the surprised looks on our faces — except that the surprised looks on our faces were not of eagerness, but of bewilderment of how we were going to eat all that she ordered us.

When I’m out with Kate and her mom, there is a lot of Thai that gets spoken that I can’t detect context for, but every once in a while I hear her mom speaking to her in Thai followed by visible and audible frustration from Kate.

Often Kate’s mom is telling her that she’s fat, in public and in my presence. Her mom will sometimes make these comments in the presence of other Thai speakers, regardless of whether Kate is there or not.

In Thai culture, you state the obvious; it’s a normal thing to talk about other peoples’ weight and appearance. In the States we’re much more sensitive and politically correct about such matters. I have never heard Kate’s mom criticize her about her weight in English. She is more comfortable criticizing her in Thai when she’s in the presence of other English-speaking friends as an effort to save face. Her mom also knows that in American culture it is impolite and rude to criticize Kate’s weight in public, so speaking in Thai is preferred and convenient.

In Thai culture, you state the obvious; it’s a normal thing to talk about other peoples’ weight and appearance.

Kate says that her mom says these things to her out of love, that her mom only wants Kate to be healthy and not have the same types of health problems that she has. But I see the hurt that it brings Kate, and how it emphasizes an impossible standard of physical beauty over healthy eating.

Of course, Kate has happier and positive associations with food. Back when Kate and her family were in Thailand, she shared with me her fond memories of eating after church with her dad in a mall that had an indoor water park. Every Sunday, this tradition helped them to grow closer together. However, occasionally he would tell her that she needed to be taller, saying that she would need to hang on the monkey bars to stretch her back and critique her posture. She remembers him as less obsessive about her weight — unlike her mother’s constant critiques — but Kate also hasn’t been in contact with him since her teenage years.

Kate has issues with the Thai standard of beauty. At 4’11”, Kate describes herself as “not skinny, big-boned, and athletic, partially due to living in the states and an American diet.” She often wonders, “If I were still in Thailand, would I be as big as I am and would I be as sensitive to being called ‘fat’? My family generally agrees that I’m big and I need to lose weight.”

Kate mentioned that there isn’t much allowance for women in Thailand to have muscle or anything beyond a skinny physique, but instead the emphasis is on weight alone. “Mom still doesn’t support the idea of a girl (me) doing CrossFit, which emphases functional fitness and consists of a lot of Olympic-style weightlifting because it could ‘ruin my uterus’, as she often tells me, and suggests more womanly exercises, such as sit-ups — lots of them.”

“There isn’t much allowance for women in Thailand to have muscle or anything beyond a skinny physique, but instead the emphasis is on weight alone.”

On a mission trip to Chiang Mai in 2011, Kate met a bright 19-year-old who lacked confidence in herself because of many of these same cultural expectations. This girl would sell omelets by the side of the street during the day, and in the evenings, she would go to the church to read with Kate. Once, the girl shared with Kate, “I feel fat. I feel like I’m dark and not as white as I should be.” Many Thai lotions contain a whitening agent.

Kate shared, “It really bothers me that a girl who is thinner than me still struggles with her body image and thinks that she is not good enough. Even 7-11s in Thailand have scales in them where I would see Thai girls taking turns weighing themselves everyday — it’s almost as if the number on the scale is more important than their well-being. The ideal measurements for Thai women are 34-24-36 (bust-waist-hips). A 24 waist was the magic number that I kept hearing growing up.”

Wearing a size 8 (waist 28-32”), Kate is perfectly healthy by any normal standard, but falls short of the impossible ideals she is held to.

Food was and still is central to our dating life. We generally like eating healthy and on a budget. More recently, we’ve been staying in and cooking rather than spending money to go out and eat something unhealthy. We enjoy the experience of preparing food that we’ll both enjoy together. Sure we have different tastes — she loves Italian food while I don’t. And I don’t have a sweet tooth at all, but she sure does!

But I’m also careful about joking with her about weight. I don’t even make self-deprecating jokes about my own body when I’m not feeling fit, because it sparks the conversation where she puts herself down about her weight.

I’m also careful about joking with her about weight.

I want Kate to know that I’ll always love her, no matter how her body changes. She will always be beautiful in my eyes, because when I look at her, I don’t see a number on a scale or her dress size. I see a strong woman with a fiery heart for the Lord and a dynamic personality. And no matter what Thai or American culture may say, God sees her as beautiful too. 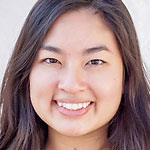 Kate Suriyatip is a student services and administrative coordinator at Pepperdine University. She is also working on her master of science in organizational development at Abilene Christian University. She enjoys weightlifting, singing, dancing, watching quality television shows and movies, and spending time with her boyfriend, friends, and family.