YOU CAN'T FIND GAO YAO on a map of China.

But in this small town, there’s an orphanage that takes care of girls who are already in their late teens — girls with disabilities because the caretakers wanted to focus on those that were more at risk. Many of them grew up in the government orphanage system and had different kinds of health issues because they weren’t eating a healthy diet.

I was part of a mission team that had a chance to share life with them for a few days and we learned how simple their lifestyles were.It surprised me when our team offered to take them out to a restaurant, that they knew very little about what was in their town because they could never afford to go out to eat. We ended up settling on Kentucky Fried Chicken (KFC); it was the first time they had ever had Western food and they ended up really liking it.

I am thankful to have gone to Gao Yao. It put my life in perspective because my family lived in China during the Cultural Revolution and had a lifestyle similar to these girls. The Cultural Revolution forced many people to work on government farms; many families like my own lived in poverty. My dad told me stories about how he would be thankful for the one bowl of rice he got to eat every day. He only got to eat meat once a year, and there was rarely enough for them all.

The Cultural Revolution praised the austere life of a farmer, and my dad exemplified that ideal. He had very few possessions and even getting enough food was a challenge. To him, having food represented his situation in life. Meat, fruits and vegetables were luxuries that many families could not afford. The government was trying to create a culture of modesty and simplicity. Eating a small bowl of rice every day was a step toward the ideal.

Somewhere along the way, I stepped into a culture where eating out became a hobby. My young professional urban life turned food into a culture of its own. I think people are passionate about their food lifestyle because it is a representation of something bigger, of the wealth and luxuries of our culture. I remember having a lot of celebrations with expensive food when I got married, but we also treat ourselves to nice food at the end of a workday, or because it’s the weekend. My culture is one where food is plentiful and the hardest decision around food is where to eat.

People are passionate about their food lifestyle because it is a representation of something bigger, of the wealth and luxuries of our culture.

When I answered the call and went to seminary, I learned about the monks of early Christianity. After the culture of Europe became Christianized, martyrdom was no longer the highest means of expressing one’s devotion to God. The rise of monastic living came about because there was an urge to have a “bloodless martyrdom”. There were many Christians who wanted to follow the examples of pious people like Elijah, John the Baptist, and, ultimately, Jesus. Life in the monastery was simple. They lived in austere surroundings and ate simple food. They appreciated the spiritual gain that came from denying the pleasures of this world, and preparing themselves instead for a heavenly reward.

They appreciated the spiritual gain that came from denying the pleasures of this world and preparing themselves instead for a heavenly reward.

I really resonated with the impulse of these monks. I don’t think my family would be too happy if I told them that I wanted to die for my faith, but there is a way to express my devotion that has both a spiritual and missional purpose. There is a special kind of insight that we gain when we forsake the world to seek Christ. That is why people flocked to the monasteries in search of special revelation. They believed that those who simplified their lives in order to seek Christ wholeheartedly were given a deeper understanding of the life of Christ.

As a bodybuilder, I see a lot of parallel with this. The bodybuilding community understands that the discipline required of our sport also provides us with unique insight. Bodybuilders are often sought out for advice. They are not just athletes; they are mentors, writers and social media icons. Many of them have their own gyms, represent supplement lines, and even do life coaching. Our sport puts on full display the discipline that we practice in our everyday lives.

Bodybuilders may be passionate about food, but it is not in the same way that the larger culture is. Instead of seeing it as entertainment we see it as a way to achieve our goals of growing muscle and losing fat. We also believe in an austerity that is driven by a purpose. The best bodybuilders are the ones who treat food as a tool instead of as a luxury to be enjoyed. We have to put the mission ahead of the comfort.

We have to put the mission ahead of the comfort.

As a Christian bodybuilder I want to go beyond the physical benefits of being disciplined about food. I see my discipline with food as a way to identify with the poor who can’t try out the newest restaurant in town. Healthy cooking at home is not just a discipline, but it is also something that I can teach to those who are trying to live a simpler life. Like the monks of early Christianity, I want to live simply for a purpose. I have met a lot of people in my community who are trying to overcome the temptations of gluttony. My desire is not just to fight the culture that I am a part of, but also to seek holiness.

My desire is not just to fight the culture that I am a part of, but also to seek holiness.

My hope is that my bodybuilding will teach me how to better identify and serve those girls in Gao Yao. I have never experienced hunger or poverty the way they have. But through discipline I can try to live in a way where I can better try to understand their world. I find it harder to relate to the poor when my lifestyle is filled with the luxuries they never have. Eating simply everyday is not just good for my physical health, but also for my spiritual health. 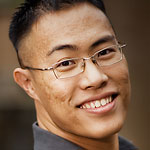 David Pat is a graduate of Bethel Seminary San Diego where he received his master in theological studies. He currently works as a missions mobilizer with OMF International, where he has used his experience in missions and as a professional natural bodybuilder to create new innovative ministries both in San Diego and Shanghai. He and his wife Carmen live in San Diego, CA.