Finding Home in the Motherland

I’ve been through many airports throughout my life — the result of life as a missionary’s kid with a perpetual restlessness to find home.

In each place I’ve been to or lived in — Kazakhstan, India, Moldova, Cambodia, Mexico — I’ve tasted a bit of home. I’ve felt welcome in the humid summer breeze, the dearness of people, the connection from understanding one another despite cultural differences, the beauty of the country itself. I found pieces of myself in those places, hints of belonging.

I had found home in so many different parts of the world — except for Korea. Those who are second generation in the States still call Korea the motherland, but to me, she’s felt more like a distant aunt who tells you you’ve gotten fat and lectures you on how you should live your life. She was a place that reminded me that I don’t belong even among my own people. On every trip my parents took us to Korea while growing up, relatives and storekeepers would cluck their tongues in disapproval at my inability to speak Korean fluently. They would snub my tanned skin as inferior to the standard of beauty they had — white and light. My parents didn’t recognize the need to undo the shame I received, which further reinforced the rejection I felt and the distaste for Korea I developed.

Korea didn’t seem to love me, so I decided not to love her back. I told myself I was better than her and her customs, her superficial and judgmental culture, and I tried to disconnect from everything that might make me seem too Korean. I spoke Korean only when I had to; I didn’t follow Korean dramas or listen to Korean pop music. I didn’t want to learn her history or her ways. I wanted to do away with the Korean part of my identity and just be American.

But the problem of being bicultural is that it isn’t a choice. I grew up speaking English, I went through the American education system and came out with a master’s degree, and yet, I’m still seen as a foreigner. I was born in California, where I’ve planted roots as an adult to make it home, and yet I still don’t feel like I can fully belong. How can I when I’m still asked where I’m from? How can I when I’ve seen glimpses of home not only here but also in other places around the world?

Being bicultural means being the in-between, of creating home wherever I am yet never feeling completely rooted. There’s an undercurrent of home-lessness in the tension of being both/and and neither/nor.

In seeking to reconcile the disconnect I felt toward my Korean identity and culture, I said yes to a trip to Korea this past March. My husband wanted to take the kids, and because he hadn’t been there in over 25 years, we decided to spend 10 days to explore, eat, and get to know Korea again. And though it was our kids’ first visit to Korea, it also became a first visit in many ways for me too.

As we rode the taxi from the airport into Seoul, the feelings of foreign and home tumbled together in my heart. It was disorienting. The city looked and felt like Koreatown in downtown Los Angeles. I could communicate with the taxi driver in Korean. I could read the signs on the storefronts. How were we on the other side of the world? A place that had never felt like home suddenly became tinged with the glimpses of home.

We went as tourists and without the filter of seeing Korea through my parents’ eyes, without the burden of their expectations of me as their child and the pressures of family obligations, I was able to see Korea and connect with her for who she was. It was as if we could have a conversation without a translator present, and she could communicate freely with me all about her story and how her story was really mine as well.

I learned about how we had stood up to countries around the peninsula of Korea that wanted to take over, who oppressed us, and how we had overcome them. I learned how the great King Sejong was compassionate and fought for justice for the marginalized, the poor, and for women. I learned how we had somehow held onto our identity as a people, and how we had become a powerful nation even though we’d been split into two. And though my bloodline ended up in a different continent, I still inherit the richness of our past, our struggle, and the strength of our people.

While I respected her for the first time when I learned our story, it was through meals and people that I knew Korea loved me and that I loved her too. We laughed with cousins and shared stories over perfectly fried chicken with pickled radishes and beer. We sat with my grandma in her nursing home and tried to help her remember who we were while feeding her strawberries and melon. We enjoyed surprisingly tasty Italian-style pizzas with family friends who had become second parents and second grandparents to our kids, and it was as if time hadn’t passed at all. The joyous ache of finding a sense of belonging that I’d felt in so many other countries at last beat in my heart for Korea.

We arrive back at the airport in Los Angeles, and I hand my eagle-embossed passport to the immigration officer. He glances back and forth from me to my passport and says, “Welcome home.” I smile but tears blur my vision. Home is many places around the world, and at last, it includes the motherland. 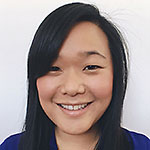 Grace P. Cho is a writer, wife to a chef husband, and mama to two littles. After pastoring in the local church context for seven years, writing has become her way of leading others. She currently writes and edits for The Mudroom and GraceTable, and she is passionate about mentoring leaders and sharing life and good food around the table.