Part of 5 of in
By Naomi Hirahara
illustrations by Ileana Soon
May 01, 2016 | min read
Part of 43: SacredProfane
0 Snaps
0 0 Snaps
Oops! Something went wrong while submitting the form.

I FELL IN LOVE WITH GRACE, feeling the tentacles of its inexplicable love invade me when I needed it most. Especially when I was 8, when I had accidentally injured a boy at my Japanese-language school. Warring with cultural identity and a desire to assimilate in the 1970s, we were holy terrors and I was the lead girl-rebel. What saved me during that dark childhood time was remembering that people of God had stood in a burning furnace and survived.

I grew up with parents who celebrated Christmas by going to another gardener's family house on Christmas Eve and playing mahjong way after the clock struck midnight. My beloved father said that he believed in Mother Nature, which made sense, because he mowed lawns and tended to gardens all day.

I converted to Christianity when I was young, going from Young Life ministry in high school, to liberation theology in college, later to a charismatic church in my young adulthood, and then to an Asian American evangelical one. In the 1980s, there seemed to be a Christian bookstore in every city, even in California.

While I appreciated the selections written by C.S. Lewis, I couldn't relate to most of Christian contemporary fiction, in which certain swear words were avoided and a strong "message" was communicated. Some were heavy with angelic and demonic figures, but I couldn't find that grace that had attracted me to the faith in the first place.

I couldn’t find that grace that had attracted me to the faith in the first place.

Instead of these Christianity-sanctioned books, I gravitated toward novels written by Fyodor Dostoyevsky, Louise Erdrich, and Chester Himes. These writers and others, in my mind, wrote about real life, consistent with the stories I was covering for the newspaper — crimes, life on the fringes, and racism. But I struggled with how readers would interpret my own writing.

I wondered if writing about gambling and chinpira, low-level gangsters in Japan, was pure and lovely. How would I be judged by other Christians? Did I have to choose between my faith and the writing my inner voice was pushing me toward?

Did I have to choose between my faith and the writing my inner voice was pushing me toward?

My therapist at the time told me that I would most likely find the essence of what I was primarily writing about — the Japanese American community in Los Angeles — if I was hundreds of miles away from it. I wasn't sure that was true, but knew that this pulpy mass of a novel that I was beating on before and after work wasn't in any shape for publication.

In my early 30s in the 1980s, I had no definite answers. I didn't hang out with Christian writers. But the call of both faith and writing was equally insistent. I didn't want to give either of them up.

I then applied for a fellowship with the Milton Center, a writing center committed to writing excellence in the context of the Christian faith, in "Poets & Writers". While I was editing a story in my messy corner cubicle, I got the call. I got in. During that first conversation, I said yes, without consulting anyone. I was going to leave my job as the editor of a Japanese American newspaper in LA, move away from my newly purchased home, family, and semi-new boyfriend to live in the Midwest for nine months.

Members of my Asian American writing group presented me with gallons of soy sauce and Top Ramen in preparation for the move. Wichita, Kansas, was no LA, but it turns out there was plenty of soy sauce, in addition to Thai spices and noodles, in every supermarket — and at least eight pho eateries.

The Milton Center was established by The Chrysostom Society, a group of Christian  writers led by Richard Foster. On the Chrysostom Society's website, Jeffrey Overstreet writes that its early members were troubled to see "Christian" writing with a "religiosity tainted by false promises". These books were "advertisements for religion rather than invitations for the imagination". In response to this trend in the '80s, the Society sought "to cultivate works distinguished by artistic excellence and honesty about the human condition, not mere religiosity".

I was able to attend one of the Chrysostom Society meetings in Colorado and met the legendary Madeleine L'Engle, author of "A Wrinkle in Time" and memoirs about writing. In our conversation, she dismissed the label "Christian writer". She felt that if you were a Christian, your faith would organically be present in your work. At the time, I wondered if that could be true, but didn't totally believe it at first.

She felt that if you were a Christian, your faith would organically be present in your work.

Author Walter Wangerin Jr. shared that he felt Christian writers need to write the truth, but to do it kindly. Philip Yancey, in his always self-deprecating way, explained that what he does as a writer is not so admirable when he compares himself to his wife, a social worker. In other words, in this quest for literary excellence, let us not take ourselves too seriously, either.

I saw this play out in a workshop I participated in every Friday as part of the fellowship. The workshop was led by my writing mentor, Virginia Stem Owens, a no-nonsense Texas Episcopalian who had experimented with living in a Christian commune and lived to write about it. Members of the Wichita community also joined our workshop. They included Rudy, the bearded Mennonite who farmed outside of the city; Diane, a professor who was the daughter of an Assembly of God preacher; and Clare, a Catholic, with a growing family.

Our denominations were varied, but we all held to the notion that our writing needed to be honed and kneaded to be improved. In this circle of white Midwesterners and Texans, I introduced my story of Mas Arai, a Japanese American gardener and atomic bomb survivor in Altadena, CA. No one ever complained about my use of dialect or commented on my all-Japanese cast of characters. What my therapist said to me was true. In this flat world, I was able to see, hear, smell, and taste the community that was so dear to me.

I recalled the words of a former Milton Center Fellow who wrote to me about his experience: "You'll find flat is beautiful."

My time in Flyover Country was a remarkable season in which I was able to push away work, family, and romantic love to focus on my writing and my faith. The fellowship wasn't an elixir to solving my creative challenges or even completely fixing my novel. It took five additional years of working on the manuscript while pursuing freelance writing before I secured a New York City-based agent and publisher.

But through those nine months, I gained a sense of freedom and community, confirmation that I could indeed be called to write passionately about Japanese Americans — and yes, that also meant Buddhists and Mother Nature lovers — and be a follower of Jesus. My character, Mas, is not a believer in my series of novels, but finds himself attracted to the concept of grace. In the first novel, he feels chased by bachi, the Japanese concept of retribution or payback, for something he did wrong in his youth, but then discovers forgiveness by the end of the story. In that sense, L'Engle's testimony was on point.

My neighborhood Christian bookseller is gone, as are so many brick-and-mortar stores. Even publishers of Christian-labeled fiction are languishing. The new generation of readers doesn't want shallow advertisements, but are seeking the truth. Writing the truth of our lives cannot be a threat to our faith. God is indeed more than strong enough to take it, and we must be strong enough to travel through that barren land to produce it. And if we have fellow travelers in our mission, it will make the trek all the more transformative.

Writing the truth of our lives cannot be a threat to our faith. God is indeed more than strong enough to take it. 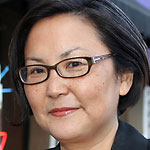 Naomi Hirahara is an award-winning novelist and social historian. She has written two mystery series. Her long-distance relationship with her boyfriend survived and she’s been married to him for almost 17 years. They make their home with their Jack Russell, Tulo, in Pasadena, CA. For more information, go to Naomi’s website, naomihirahara.com. 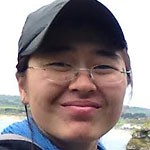 Ileana Soon is a Bornean-born illustrator currently living and working in Los Angeles. She has an insatiable thirst for travel, a not- so-secret love of magic, and a passion for all things cinematic. You can check out more of her work at ileanasoon.com.