From Nepal with Love

Part of 5 of in
By Shanti Esther Parajuli
Illustrations by Kimberlie Wong
Nov 11, 2018 | min read
Part of 62: Money, Money, Money
28 Snaps
28 0 Snaps
Oops! Something went wrong while submitting the form.

I received a call from my Kaki (aunt in Nepalese) in Nepal the other day. It seems she is feeling unwell again, and I am worried her body is becoming weaker day by day. According to the doctor, it’s a “general weakness” that is probably caused by her old age. But I find it hard to accept that Kaki has become old — she’s only 48!

Perhaps, the doctor is right. Kaki’s body has become old at the age of 48.

But do not be misled, because Kaki is anything but a helpless victim. She is this perfect blend of astute calmness and fierceness. It was beautiful to watch her dance at her eldest daughter’s wedding. It was a marriage of love. And, last year, Kaki proudly celebrated her other daughter’s graduation from a master’s program. And although I feel upset that Kaki fasted every Thursday only for her son and husband, I also know she fought hard for her daughters’ right to choose when and whom to marry and to choose career over marriage. She is fierce.

When she called the other day, she told me she went with a group to meet a big Maoist political leader, despite her ill health. After the end of the monarchy on May 28, 2008, and the emergence of the Federal Democratic Republic of Nepal, Kaki is hopeful that Nepalese conditions will change. The fact that she can now share her concerns with the leaders of the nation, unlike the earlier days under monarchy, looks promising to her. She is confident that the Maoist political party will bring change.

Kaki went to the meeting with a lot of deliberation on which problem to share. Kaki knew political leaders would not have the time to hear all of her burdens, because they were busy working hard to make her life better — at least that is what they claimed. But Kaki could not decide which problem was more urgent.

Should she share about the water crisis? But electricity was a major problem, too. Kaki also wanted to gently remind the Maoist leaders to fulfill their promise of settling the issue of corruption, because it was harming poor children’s futures. School and hostel admission for her grandchildren was another issue; the school demanded donations for admission, which Kaki could not afford. Kaki also thought the bridge needed to be immediately repaired because children had to miss school for months during last year’s monsoon season.

At the same time, Kaki had heard stories about Chinese businesses flooding developing countries with imported laborers from China, and she was concerned that this would undermine the potential to generate work opportunities for locals. Kaki wanted to ask if locals would be employed when the Chinese came to build roads and bridges, or if the Chinese would bring their own laborers. Kaki felt especially invested in this issue, since many Nepalese people have been feeling compelled to leave Nepal to work abroad for any labor job opportunities to sustain their family.

Kaki wanted to ask if locals would be employed when the Chinese came to build roads and bridges, or if the Chinese would bring their own laborers.

Kaki’s concerns are legitimate. More and more, Nepalese people migrate in hopes of providing better living conditions for families back home. According to studies from the Nepal Institute of Development, at least 2.2 million Nepalese migrate overseas for employment opportunities, 10 percent of whom are female. This does not include Nepalese who leave to work “illegally”. The low economic growth in the country, coupled with the rapidly increasing labor demand abroad, is gradually increasing the number of Nepalese migrant laborers.

On one hand, workers abroad have become a key source of income for Nepal and have become automatic instruments for poverty reduction in Nepal. In 2009, remittances accounted for nearly 26 percent of Nepal’s gross domestic product. In 2013, the World Bank ranked Nepal third in the world in terms of its contribution of remittance to GDP. Between 2012–2013, the government mobilized 434.58 billion rupees in remittance only.

On the other hand, the impact of labor migration on Nepalese communities is brutal. The reality of exploitation and harsh living conditions that most labor migrants abroad experience is tragic. Many arranged their jobs through Kathmandu-based labor recruitment agencies. Unfortunately, there are no strict regulations and supervision of recruitment agencies, which makes the laborers vulnerable to deceptions and exploitation by the agent.

And the damages done to families and communities due to separation are indescribable. The struggles of women left back home are especially distressing, since it is mostly men who leave. The everyday struggle of being buhari, living alone with in-laws, takes its toll in such a way that the body gets old at 48!

The damages done to families and communities due to separation are indescribable.

Kaki was married to the third son of six brothers, five of which migrated as laborers after they got married. Only the youngest son stayed back to oversee family affairs; in a patriarchal society, teenage boys are more capable to take on responsibility than mature women. So, while the youngest Kaka (uncle) was occupied being the man-in-charge, the Kakis were busy replacing their husbands in the field. Being a family of high caste, land was not an issue. By virtue of their caste status, Kakas were entitled to generational land property. So Kakis worked hard in the field. In fact, they were expected to do so — after all, it was their husbands’ farm and would eventually be inherited by their sons.

Kaki told me she was pregnant with her third child when Kaka left for South Korea. She was almost 20 at that time. Kaka left because he needed capital to give a good life to Kaki and his family. He was willing to bear the burden of separation and migration to a land where everything — food, language, streets, work, market, people — was unfamiliar to him, for the sake of his family. Fortunately, or unfortunately, Kaka did manage to find a job at an iron factory and send money home every other month — at least that’s what Kaki’s youngest brother-in-law told her.

After 21 years, Kaka returned home. His boss dismissed him after he had an accident at work that left his left arm injured; he was no longer an able-bodied laborer, so he had to return home. The goal was to achieve decent living, at least later in life, but the outcome could not have been more opposite. After years of working as a laborer, Kaka returned home with a disability. His wife was old, their daughters were married and gone, and their youngest son, then 21, saw him for the first time and struggled to call him Buwa (father). The perpetual life struggle of poor people!

Kaki is very happy that Kaka is now home, but wishes he never had to leave. Therefore, Kaki is committed to the struggle to create a new Nepal. So, she went to the meeting with the decision to share about all these problems. And when she did, the Maoist leader responded, “Yes, Kaki, that is all true. Your problems are our agenda. We are going to create a new Nepal. We will have more jobs and better life conditions. We are committed to the poor people’s cause. So, stay with us, Kaki. Vote for us. Help our government to come to power, and we will assure you a solution.”

“Help our government to come to power, and we will assure you a solution.”

Hearing this response, Kaki returned home very confused. She did not understand who was going to solve whose problem! 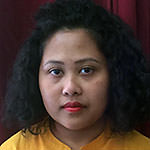 Shanti Esther Parajuli is from Nepal. She is currently a doctoral candidate in the department of systematic theology at Union Theological Semianry in New York.