Get Out of the Boat

Part of 4 of in
by John Riley with Linh Ly
illustrations by kin lok
May 01, 2015 | min read
Part of 31: Metamorphosis
0 Snaps
0 0 Snaps
Oops! Something went wrong while submitting the form.

For the third time in her life, Linh Ly felt God calling her to drop what she was doing to follow Him. But this time, the call took her beyond the scope of traditional ministry.

a call to begin

When Linh first became a Christian, she experienced an incredible hunger to grow in Christ. She began reading God’s Word, consistently attending her fellowship, and desiring to see how her life could be changed.

A friend gave her Rick Warren’s “The Purpose Driven Life” and she read through it with an earnest heart, learning to forgive people who had hurt her along the way, seeking reconciliation with those same people, and wanting to love others more.

Linh took the call to follow Jesus seriously. But this wasn’t only an internal commitment; it was something she embraced unashamedly for all to see.

“I was baptized within a few months and was excited about starting a new life.”

A Call to Ministry

Missions and service were a very integral part of Linh’s faith journey from the beginning. As a new believer, she focused first on growing in Christ, but increasingly sensed God leading her into serving full-time in the church.

“The five and a half years I worked on staff was a season of refining and spiritual equipping, but the longer I worked in ministry, the more I saw my interactions with non-Christians decrease in my full-time workplace.” This realization caused Linh to begin feeling the need for a transition.

Linh initially served the English congregation of her church in an administrative support role. This position grew to assisting with various other ministries, such as young adults, children’s ministry, prayer ministry, and event planning.

“My time on church staff prepared me for a lifetime of service. The things that I learned and the ways that God worked in my life have changed me and brought me greater wholeness.

My time on church staff prepared me for a lifetime of service.

“I began serving with Silicon Valley Christian Health Alliance, a free medical and dental health clinic serving the homeless community and those in recovery. Our clinic was housed at the CityTeam men’s recovery facility in San Jose, so our patients were often those without health insurance. I served as the prayer and volunteer coordinator there for over five years.”

This particular ministry was started by one of Linh’s church friends, a medical doctor with a heart for providing medical care to the underserved. Linh’s church supported this ministry as part of their outreach program. Linh started out volunteering to pray with the patients, but eventually became involved with the leadership team as a volunteer coordinator.

“The time I spent serving the homeless was very humbling and enlightening. It was one of the most ‘real’ settings in which I’ve experienced people living out their faith. They depended on God to sustain them and help them in their daily lives. They were open about what they felt and experienced, without holding anything back. They were vulnerable in their struggles. I had many deep spiritual discussions about life and God in that waiting room, discovering that the homeless are just like me, people in need of God.”

A CALL “FROM” MINISTRY

“Transition always seems to begin with some tension or unease with the status quo. Discontentment stirs my heart, motivating me to make a change.

“It wasn’t like short term mission trips weren’t being sent out from my church, that people were not being reached, or that we weren’t supporting missionaries overseas. But I wanted more of what happens overseas to happen at the local and national level. I wanted to be involved in reaching people in the nearby schools, neighborhoods, businesses, government, etc. — in all aspects of our society. I began praying more intentionally for God to direct my involvement in that movement.”

I wanted to be involved in reaching people ... in all aspects of our society.

Linh took a class at her church on global strategies for modern missions, where she learned about business being used as an entry point into the nations, even “closed countries”. Following the class, she went on a vision trip with her church to Cambodia and Vietnam where God opened her eyes to the possibility of missions and business in her future.

As she was pondering these new ideas and trying to discern exactly where God was leading her, a friend invited her to a Repurposing Business (REP) Event, sponsored by The Institute for Innovation, Integration & Impact, Inc. The Institute sought to bring together people with a passion for business and a heart for the Kingdom. For Linh, The Institute seemed to be the answer to that tugging on her heart.

“Everything clicked when I heard their vision for equipping and training believers for the marketplace.”

Linh took the REP Training offered the next year and then went on a business mission trip to consult with local businesses in Chennai, India. Later that year, she made the complete transition to join The Institute as a mobilizer.

“My friends and family were supportive, but the rest of the church members did not fully understand what a marketplace calling meant. There were times when they thought that because they stopped seeing me in the church office or on Sundays (my position with The Institute as a church liaison often sent me to other church’s Sunday services), that I had left the church completely.

“I would get comments like the surprised, ‘Oh, you’re still here,’ or the guilt inducing ‘We haven’t seen you for a while’ — which made this a very trying time for me. The church leaders and my mentors supported me, but many in the church did not understand.

“My mentors affirmed my calling through prayer and were regularly checking in with me. Looking back, it was probably because there was no church announcement about my transition, so people guessed, made assumptions, and asked questions, which made the transition more difficult.”

The biggest struggle during that transition from church to marketplace was this seeming lack of support. “I went from being a core member of the church, to being someone ‘doing my own thing’. I felt very isolated at that time and had to rely on God more than ever.”

“I went from being a core member of the church, to being someone ‘doing my own thing’."

“My identity became anchored in who I was in Christ and not anything or anyone else. Because my calling came from Him, I knew He would be with me, and even through the financial difficulties, I learned to place my trust in God as my Provider.

“This transition was one of the stormiest times of my life, but also one of the most miraculous times. I experienced God’s faithfulness time and time again, as well as more of his grace in my life.

“God was the one who initiated my ministry transition; my job was only to obey. Transitions are always periods of uncertainty, but this one was also a time for me to be grounded in what is unchanging — God, His Word, and my identity in Christ. Our faith is deepened when stretched and strengthened in times of difficulty.

“I’m on a long journey of trusting God with whatever happens. A successful transition is not smooth or without issues, but one in which we rely on God’s strength and guidance in the midst of uncertainties.

A successful transition is not smooth or without issues, but one in which we rely on God’s strength and guidance in the midst of uncertainties.

“My vision is for all believers to be passionate about making an impact in their workplaces, whether locally or overseas. I am also praying for Asian believers to be sent out to the nations, returning to our home countries to bring the message of the Gospel. We are blessed to be a blessing. I want to see that in our generation: a movement of God’s people on fire and making an impact in the world.”

To learn more about how business and leaders can integrate faith and calling, visit The Institute at www.inst.net. 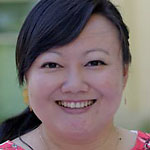 Linh Ly is passionate about people living out their destinies. She has a Bachelors degree in biological sciences, with expertise ranging across several industries. She uses her professional expertise in partnering with people and businesses to bring lasting impact in the marketplace. Her role at the Institute equips professionals to be effective leaders in their sphere of influence.