Getting Off the Fence

I became Eastern Catholic because I was a bad intellectual. And I wanted to become a better one.

I did not know that my intellect was in such bad shape until I finished my doctorate. Professionally, I have a Ph.D. in geography. My dissertation is on Cantonese-speaking Protestants and how they engage with politics and social issues. It’s over 600 pages long. By all measures, I was doing fine.

I even had a Christian argument in the dissertation. I argued that everything is theological, even secularism, and I thought this was radical because even people who don’t believe in God still have a position about the supernatural.

I also didn’t make judgments about any of these theologies because my conviction at the time was that I should sit on the fence and watch my research subjects duke it out theologically. Some people felt like it was God’s mandate for them to engage civically; others became jealously protective of private spaces like their churches and families because they were institutions mandated by God. Some people said that God’s law meant that you had to obey the civil authorities no matter what they said; others said that working for God’s justice meant that you sometimes had to oppose the political establishment. Some people thought that their religious freedom was under attack by liberal activists; others felt that their very way of being as God made them as sexual minorities or young people or the poor was being assaulted by conservatives. Sitting on the fence meant that I could be friends with everyone.

The problem is that I got stuck. Calling everything “theological” might have been clever, but all it really amounts to is a “he said, she said” when it comes to the supernatural. After a while, I even stopped writing. I didn’t have anything to say anymore.

So I became ... Eastern Catholic?

As I suspect might be the case among most Asian American Christians, I didn’t even know what Eastern Catholicism was.

Now that I am one, I think I know some things about it. There are 23 Eastern Catholic churches representing a number of ancient ways of worshiping Jesus Christ as God in the world: Byzantine, Coptic, Armenian, Ethiopian, Syrian, Chaldean. We are all linked to a church that has yet another very old form of worship that originated in the city of Rome, the Latin Church, which most people know as the Roman Catholic Church. Eastern Catholics are not Roman Catholics; we are linked to them in what is called communion, in partaking of the body and blood of Jesus Christ together despite our different traditions and autonomous churches.

The Eastern Catholic church I joined is called the Ukrainian Greco-Catholic Church. The name is a bit of a problem because it doesn’t really sound like a church for an Asian American Christian. I am, after all, not ethnically Ukrainian.

I got into this Eastern Catholic church because what was happening in 2014 in Hong Kong revealed to me how stuck I was. On September 28, tens of thousands of Hong Kong people, including many Christians, poured out onto the streets of Hong Kong protesting police brutality and the anti-democratic measures. These occupations, lasting for 79 days,  were known as the Umbrella Movement because of the umbrellas used by protesters to defend themselves against the police.

The Umbrella Movement didn’t have any clear sense of leadership, organization, or objectives. This meant that the stakes of the theological “he said, she said” were higher. A good number of Christians, both in Hong Kong and in the diaspora, criticized these actions as bringing disorder in an international financial center where stable market conditions had to be preserved. But many of the protesters were also Christians; for them, their homes, heritage sites, and local way of living were under assault, and they were crying out to God for justice. This event provoked a crisis for my work because I found it impossible to stay on the fence. I sympathized with the protesters, but publicly voicing my support — which I did immediately and impulsively — risked tipping my hand on what I thought of the theology of the elite establishment.

This event provoked a crisis for my work because I found it impossible to stay on the fence.

In fact, some of us Christians in Vancouver held solidarity prayer events for the movement in Vancouver. Most of us were Chinese evangelicals who were trying to figure ourselves out intellectually and spiritually because this, too, was a crisis for us. Chinese evangelical churches in Vancouver were hardly supportive of the Hong Kong movement; many of them also preferred to sit on the fence and wanted us to do the same.

However, weird as this may sound, we found a spiritual leader in a Chinese Jesuit priest who was somehow part of the Ukrainian Greco-Catholic Church. He did not sit on the fence. Instead, he taught us how to discern in a spiritual way what was going on politically in Hong Kong.

He taught us that the world of theology wasn’t at all something we could be neutral about. There was the Holy Spirit on one hand, but there were also evil spirits. In our personal lives, we might discern where God works in our lives to make us more loving people and where evil spirits might be attacking us to break down our love for God and for each other. But this also applies to politics, he said. The Holy Spirit makes people free to live lives of human dignity, but evil spirits want to control, constrain, and oppress people. Both spiritual forces were at work in the Umbrella Movement; this is why we could not sit on the fence and just say that it was all “theological”.

If we were going to engage in this next level of intellectual discernment, we had to be able to feel God’s presence deep within ourselves. Our spiritual father taught us some of the practices in his Eastern Catholic church. But it wasn’t ethnic Ukrainian stuff he was teaching us; instead, he invoked the ancient Byzantine tradition from Constantinople as it was passed down through the city of Kyiv, which is the capital of modern Ukraine. The point of this tradition, he showed us, was that we encounter God’s presence through the various chants and bodily actions of the Byzantine liturgy, to meet God in a heaven-on-earth setting. In this way, we acquire wisdom.

By practicing these traditions, I discovered my intellectual mistake. I had been trying to be above the fray; that was why I was sitting on the fence. But most of the chanting in Byzantine liturgy is simply us saying, “Lord, have mercy.” Our personal devotions revolve around the Jesus Prayer: Lord Jesus Christ, Son of God, have mercy on me a sinner. There is a word that we use in the Byzantine tradition to describe what is happening intellectually here: hesychasm or stillness.

In practicing hesychasm, I entered into the mess of something like the Umbrella Movement’s directionless politics. My problem was that my intellect had made me feel superior to Cantonese Protestants, separate from their messy lives and politics. Instead of standing above the fray and sitting on the fence, I seek intellectual stillness by asking for God’s mercy in the midst of a mess that I am trying to sort through in discernment.

I seek intellectual stillness by asking for God’s mercy in the midst of a mess that I am trying to sort through in discernment.

Slowly, I am becoming unstuck. I experienced an epic writers’ block while I was stuck. I could not write about Cantonese Protestants, because I didn’t have anything to say about them. But with my new intellectual practices as an Eastern Catholic, I feel like the irony is that I did not remove myself from the Chinese Christian equation. Instead, my Eastern Catholic practices have made me seek God’s mercy from within the mess of the world’s sinfulness. This sinful world includes Cantonese Protestants engaging politics and social issues, and I am part of that world. The effect has been miraculous, as after a few years of being stuck, I have found myself starting to write again.

The icon of the Holy Orthodox Martyrs of China (1900)  and Russian icon of S. Mary of Egypt (17th century) are considered public domain. 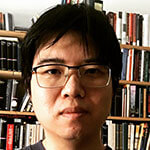 Justin Tse (he/him/his) is Assistant Professor of Humanities (Education) at Singapore Management University. He is the lead editor of "Theological Reflections on the Hong Kong Umbrella Movement" (Palgrave, 2016) and is working on a book manuscript titled "The Secular in a Sheet of Scattered Sand: Cantonese Protestants and Pacific Secularities" (in preliminary agreement, University of Notre Dame Press). Although he is Eastern Catholic, he cannot seem to stop writing about Asian American evangelicals. Also, he is happily married now. He stopped using evangelical pickup lines.