Part of 8 of in
By Ashley Yong
Illustrations by Ivy Chang
Apr 01, 2017 | min read
Part of 54: Blend
0 Snaps
0 0 Snaps
Oops! Something went wrong while submitting the form.

My romance definitely started out in a recognizable way: I swiped right on Tinder on an incredibly attractive 21-year-old guy named Cory. We matched, but I thought little of it; Tinder in Columbia, Missouri was 90 percent white guys holding fish, a rifle, or something else that screamed Southern Midwestern. City girl met country boy and we fell in love. But our story came with a twist early on: We are a biracial couple, and more than one year later, I’m still with him through countless ups and downs.

I am from Chicago, raised by immigrant parents, generally liberal, and Christian. Cory is from the small town of Ozark, Missouri, generally conservative, and agnostic. I am Asian American (Chinese, Taiwanese, and Malaysian). Cory is white; he does not know what his ethnicity is and never cared enough to find out. As a woman so closely tied to her heritage and culture, this surprised me.

Aside from me occasionally criticizing him for ordering sweet and sour chicken at Chinese restaurants, we do not actively consider our distinct race when we spend time together. Sometimes, though, race has made itself glaringly apparent. A few months into our relationship, one of his friends asked him, “What’s it like dating an Asian girl?” Cory replied, “Not any different from dating a white girl.”

“What’s it like dating an Asian girl?” Cory replied, “Not any different from dating a white girl.”

I sighed with relief. A month before we met, Cory had traveled outside of the United States for the first time to Hong Kong. He said it was the best experience of his life. Still, because I was the first Asian American or woman of color he had ever dated, I could not shake the feeling that maybe he was dating me specifically because I was different. Exotic. The manifestation of all his crazy Hong Kong adventures.

But even as I stressed about wanting him to date me for me, at the same time, I wanted him to recognize how central my ethnicity is to my identity. Being compared to a white girl felt like perhaps I was not sharing enough of my identity and culture as an Asian American. I did not want to be just any other girl.

Months later, I asked one of my friends what kind of guy she thought was my type. Without hesitation, she replied, “A white guy.” I was horrified. All of a sudden, I felt like I was an active participant in the classic white savior trope — the arm candy of a heroic white male who did society a favor by being with me. I first learned about the white savior trope in various movies and texts — “Pocahontas”, “Gran Torino”, “The Last Samurai”, “To Kill a Mockingbird”, to name a few. Over time, these various messages showed me that marginalized people like me need a white man to save them from their trials and tribulations, overcome odds, and accomplish things.

I felt like I was an active participant in the classic white savior trope — the arm candy of a heroic white male who did society a favor by being with me.

I was unexpectedly confronted with this white savior trope when I asked Cory what his favorite physical feature was about me. I was shocked when he said my eyes. I said, “But they’re small, squinty Asian eyes. In fact, they’re one of the features I’m most insecure about.” He replied, “Yeah, they’re small and they’re beautiful. And you are Asian, by the way.” Although I was swooning and appreciative of his kind words, in the back of my mind I thought, “But do I need him to tell me that? To convince me that? Why can’t I believe that myself?”

Despite his affirmation, I felt that being caught subscribing to a heavily Western-defined beauty standard was a sign that I didn’t know myself. Maybe I didn’t need to know myself if I had him to constantly reassure me that I didn’t need to hold myself to society-defined standards; Cory could save me from those feelings. I was ashamed of my dependence on him but did nothing about it. That conversation made me doubt whether I was fit to be in a relationship at all.

At the same time, our interactions made me realize he is not necessarily or inherently “winning at life” simply because he is a white man. For example, Cory explained that he supported Donald Trump’s promise to repeal the Affordable Care Act because he had lost his own health insurance with its implementation. Health was above all else his priority. Cory said I would not understand, considering I had the privilege of keeping my health insurance. It made me realize that while he is a racial majority, he could still be disadvantaged along other intersections.

It made me realize that while he is a racial majority, he could still be disadvantaged along other intersections.

Race even followed us home when we visited each other’s respective hometowns and parents. This past November, I visited Cory’s hometown with him. Despite Cory’s instructions, I could not bring myself to call his parents by their first names. In Asian culture, elders deserve more respect and should be addressed as Mr. or Mrs. and their last name. When Cory came to Chicago and met my Chinese Malaysian father, Cory often had a difficult time understanding him, which held them back from truly getting to know each other. It was disappointing to see, but it didn’t change my hopes or expectations regarding our future together. It was just one of those things we resolved to try harder in and take more initiative; the challenge excites me, and I know it will be worth it.

Our arguments about race are generally not concerning our own identities, but rather having difficulty seeing each other’s perspectives on race globally, which come out in small, innocuous ways. He said he wanted to own a sports car when we were married, but said I was not allowed to drive it, poking fun at the “Asian women are bad drivers” stereotype.

I knew he was only half-kidding, but it was difficult to get him to understand how I felt in response to his microaggression. I was frustrated. It was not serious enough to start a fight over but not casual enough to let slide by. I was in an awkward stage of limbo where either decision was the wrong one. While I voiced my disapproval, he brushed it off with a mocking, whiney, and unsympathetic, “Aww.”

It was difficult to get him to understand how I felt in response to his microaggression.

To this day, I still do not know how to get him to understand the impact some of his seemingly harmless comments have on me and feel I never will, because he has never been in the minority. These arguments tend to end not with productive discussion, but rather a, “Do we have to talk about this right now? Let’s talk about something else” from Cory. I understand it makes him uncomfortable, so I try to give him time and space to reflect.

At one point, our arguments over race became so heated that he said he was bothered by how much we talked about it. I was upset. I could not understand how he did not care about something so fundamental to my life that affects me on a daily basis, whether obvious or not. I was compromising a part of myself to continue the relationship, but I love him. It’s an uphill battle, but I have made peace with how people may treat us in public or how hard it will be for our families to connect. I have confidence in us because I know he is trying to understand, and I hold steady to the hope that I can help him genuinely understand my views toward race.

I could not understand how he did not care about something so fundamental to my life that affects me on a daily basis, whether obvious or not.

Although Cory and I are especially distinctive people, our relationship has been very much about navigating our differences, yet still loving each other at the end of the day. Our relationship has taught me about my own identity as an Asian American Christian and learning how to coexist and love someone while respecting his beliefs. He has a newfound appreciation of and perspective on discussing racism because I have shared with him what it is like to be a minority in the U.S.

We have had to learn to not talk over each other, be empathetic, try to see things from each other’s perspective, and reflect on our own privileges. I see it as a beautiful bridging of cultures and, even as we persevere to build that bridge, we continue to challenge the other’s perspective and understanding of our privilege in an unavoidable way.

“Why am I with him?” is a question I still ask myself a lot. And my answer is that I love him. I just do. And I know that doesn't lend itself to a neat logic but it's the truth. I've toyed around with the idea that maybe I'm just dependent on him. Maybe I don't have a strong enough sense of self and relationship with God to be without him. But I am proud that both of us have stepped out of our comfort zones to love unconditionally. Or at least try. 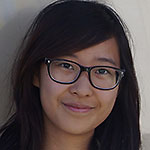 Ashley Yong is a sophomore at the University of Missouri majoring in Journalism Strategic Communication. She is from Darien, Illinois and enjoys graphic design, photography, and writing. She runs a homeless nonprofit and is involved in numerous campus organizations, including Residential Life and the student-run campus TV station.

Ivy Chang is a designer based in the Bay Area. She came to the U.S. from Taiwan when she was 10 and met her first wild animal in New Hampshire. She is inspired by the exploration and language of life, the little and big moments that resonate with her. Her work often involves anthropomorphic animals and objects as a way of storytelling from a humorous and charming perspective.