During the years of American involvement in World War II, from 1941 – 1945, 120,000 persons of Japanese ancestry (called Nikkei) were incarcerated in various remote areas of the U.S. without any due process or regard for constitutional rights. Many families lost much of their property and personal belongings due to the short notice given by the government to evacuate.

Many years later, it was determined that the given reasons for justifying the imprisonment of these thousands of innocent persons, most of whom were U.S. citizens, were found to be false. The so-called military necessity and security risk connected with the Japanese American community was a monstrous lie perpetrated by racist fears, war hysteria, and the lack of righteous political leadership.

My wife’s Uncle Cecil, born and raised in Southern California, was a young University of Southern California engineering graduate in 1936. To his dismay, he discovered no one wanted to hire someone of Japanese ancestry. Out of desperation, he began a one-man fishing boat repair business in the L.A. Harbor that quickly became hugely successful. If a fishing boat broke down in the middle of the Pacific Ocean, he could fly to any location and make the repairs on the spot because he had his own seaplane and repair tools, long-range radio equipment, and detailed maps of the ocean. Of course, after Pearl Harbor, he was immediately arrested by the FBI with all of his “suspicious spy-like” equipment, even though he had never been to Japan or spoken a word of Japanese! The government confiscated everything he owned and sent him off to an incarceration center in the Arizona desert. This story is just one of thousands of crimes committed by the government in the name of national security and wartime military necessity.

In the 1970s, some courageous visionaries in the Nikkei community started a movement to obtain an apology and monetary reparations from the government, and support for this effort began to pick up widespread steam in the 1980s. There was broad consensus that a governmental apology was needed to remove the onus of the incarceration off the Japanese American community, who were the victims of the injustice. The community debated the necessity of demanding monetary reparations, but ultimately concluded that it was important for the government (the perpetrator of the injustice) to pay reparations as a restitution to the victims and that it would also serve as a precedent not to duplicate these kinds of mistakes. After much discussion, we forged a consensus that there should be reparations of $20,000 for every incarceree — an amount deemed significant but still only symbolic of the total losses incurred by the community.

While I was the Executive Director of the Little Tokyo Service Center (LTSC) in the 1980s, we hosted a number of community meetings where numerous discussions about redress and reparations took place, and LTSC provided translation for Japanese-speaking participants engaged in the fight for redress and reparations.

In the beginning, not everyone supported this effort. Some members of the community did not want to dredge up hurts from the past and urged people to move forward and look to the future — perhaps thinking it is better to forget the past. Others thought asking for monetary reparations was undignified or even insulting and crass. Many people thought the government would never apologize nor provide monetary compensation, so therefore, it was a wasted effort and could create tensions or backlash for no apparent gain. While I was personally in support of the entire campaign, I was very skeptical that the effort would ever succeed — at least not in my lifetime. After all, the numbers of Nikkei in America is a minuscule proportion of the country’s total population — what chance could we realistically expect to have?

As many people are now aware, the cohort of Japanese American congressional leaders devised a series of formal hearings that allowed victims to share in public testimony, many speaking aloud for the first time, the hurts and losses experienced by the incarcerees. The testimonies spoke of destroyed families, deterioration of mental and physical health, and the subtle pain of being branded as disloyal or being residents or citizens who were not to be trusted. Many people, even amongst the Nikkei community, were hearing these personal stories for the first time from immigrant and American-born victims.

My immigrant parents rarely talked about their experience in the incarceration camps, although they spent two years incarcerated at Manzanar (one of the remote incarceration centers located about 200 miles northeast of Los Angeles) and then transferred for another two years to the segregation center known as Tule Lake (Tule Lake, near the Oregon border, was where the government sent the incarcerees who were deemed “disloyal or troublemakers”).

When the hearings took place in Los Angeles, they were widely reported in the ethnic press, and I took the opportunity to ask my parents about the camp experience, and especially about the death of my 4-year-old brother at Manzanar (I was born in Manzanar two years after he died). My father answered my questions with anger and he looked at me with a fierceness I had not seen before, as though my questions were impudent and grossly ignorant, but I could not have known how he felt since he never spoke of it. My mother shed tears when, for the first time, she revealed to me the pain and deep sorrow she suffered during the illness and death of her son. Perhaps this was cathartic for them, but the level of emotion it created caused me to never raise the question with them again.

For the broad Nikkei community, the Congressional Hearings were important for these wounds and pains to be made public, even though such things were rarely expressed, as in the example of my parents, by the so-called “inscrutable Japanese”. The hearings allowed people outside the ethnic community to hear and know and then to empathize and sympathize with the results of mass-incarceration.

Eventually, the government was persuaded that an injustice had taken place, and President Reagan signed the Civil Liberties Act of 1988, which called for a governmental apology and reparations of $20,000 to every living incarceree for the unjustified imprisonment of Japanese and Japanese Americans during WW2.

Because I was born at Manzanar, I was eligible to receive a letter of apology from the President of the United States and a check for $20,000! Even though I was too young to remember the camps with the barbed wire and the sentry guards and watch towers, nevertheless, I grew up with a certain stigma that I was different from the majority population (which, in the San Fernando Valley, was predominantly white) and subtle hints that I was not fully American.

Getting a formal apology from the president was nice. Getting $20,000 was also nice — and I am reminded of it whenever I sit on my living room couch! But also, there was a satisfaction that my community was able to achieve a major political battle — and a pride that this country was capable to admitting a mistake and making restitution.

But while I am thankful for the restitution, I am also aware that governments can have a fragile sense of security and act irresponsibly to future unwarranted perceived threats from other minority groups; as a member of an aggrieved party to such injustice, I need to, in greater measure, be vigilant not to let it happen again. Restitution for past sins are being sought by other American victim groups such as the slavery of African Americans and the decimation of Native Americans. These are victims with whom the Japanese American community can and will stand together, shoulder to shoulder, in their efforts for justice.

Who knows — perhaps our government may again someday say “We are sorry.” 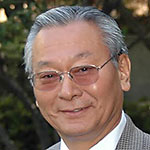 Bill Watanabe retired in June 2012 after serving for 32 years as the founding Executive Director of the Little Tokyo Service Center Community Development Corporation (LTSC CDC). Starting as a one-person office in 1980, LTSC under Bill's leadership became a multi-purpose community-service agency in downtown Los Angeles with over 140 paid staff providing services for seniors, youth & families, low income housing, childcare and many other programs in central LA. It is recognized as one of the premiere nonprofits in community development work. Bill volunteers his time mostly with the Little Tokyo Historical Society and other projects related to historic and cultural preservation. He is a member of Evergreen Baptist Church of San Gabriel Valley and has served as the Moderator for many years. Bill received his Masters in Social Welfare from UCLA, is married and has one daughter, and lives in Silverlake, only a short drive to his ethnic neighborhood of Little Tokyo.