WHEN I WAS 4 years old, my very first memory of my father was how he used guilt to discipline me. “Don’t do that, Andrew, you don’t know how long I have to live.”

My father’s words were impactful in a way that left me feeling guilty and empty whenever I shared joyful news about my life with him. I was robbed of joy every time I was rejected and every time something was wrong or out of place, because I believed I was responsible for every problem or mistake. Like a hard pill to swallow, I took my dad’s words obediently, only hoping to make sure I didn’t cause any harm or disappointment to anyone except myself.

I was robbed of joy every time I was rejected and every time something was wrong or out of place, because I believed I was responsible for every problem or mistake.

Guilt and failure — even just the fear of it — broke my ability to understand the meaning of joy.

Growing up, my family seemed to be in constant tension. My parents would fight, and when there was yelling, I would fear the loss of what kept me joyful: my family. My parents divorced when I was 14, and everything seemed to come to a breaking point. It became another instance that I blamed myself for. The divorce became the trigger for my undiagnosed episodes of depression as life continued to spiral further and further outside of my control.

My mother was there for me during many of my depressive episodes. I recall the day after I tried to commit suicide by jumping off a building; I remember how she calmly sat with me as I cried when I didn’t go through with the attempt. I admired my mother’s strength and courage to keep our broken family together when she had to raise both me and my sister, all while working a full-time job. I struggled with depression on and off throughout middle school and high school. It was around this time I found out that cutting was an outlet for relieving the negative emotions I constantly held inside.

Cutting became my choice punishment for all the bad I thought I caused. It was difficult to find joy when I had so many threatening and negative voices in my mind discouraging me from living. When I first thought to cut myself, I believed it would be possible to balance the scale of my suffering with punishment. I never cut as an attempt to kill myself. At first the thought horrified me, but at the first sight of spilling blood I realized it was fine as long as I could experience pain instead of the numbness of life I endured daily.

I had gotten to a point where I struggled with seeing the value of my life, and stole a scalpel from school to use on myself.

I had gotten to a point where I struggled with seeing the value of my life, and stole a scalpel from school to use on myself.

Within the span of a week I had lacerated my left arm and both shoulders with over 100 cuts. I remember looking at myself in the mirror with my bloodied arm, just crying. I made sure to bandage my arm whenever going out in public, while wearing long sleeves.

One morning, however, I had forgotten to lock my door when bandaging my arm and my mother saw the expression of my struggle. My mother broke down in tears. I broke her heart. I hadn’t thought about the effect my cutting would have on the people who loved me most.

My father, on the other hand, told me how stupid it was that I would now have a scar that would forever remind me of a regretful decision. What my father assumed was a permanent stain on my life became a beacon of hope and light for others to see Jesus and His love for me and ultimately, to see that I could be rescued.

What my father assumed was a permanent stain on my life became a beacon of hope and light for others to see Jesus and His love for me.

I experienced the blessing of meeting Jesus at a high school church retreat during the summer of 2009. At the retreat, the message that brought the love of Christ to my heart was about Jesus serving His disciples by washing their feet. I couldn’t understand how someone of great authority, holy stature, and miraculous skills could stoop so low as to wash someone’s feet. That night I asked Jesus to come into my heart and become the Father with whom I had always wanted to experience joy.

Although every earthly relationship would have some disappointment, with Him, there never was. I would rebel against His will, and doubt His love, yet every time He faithfully loved me. Whenever I rebelled, He would patiently wait for my return with open arms. And during my moments of doubting of His love, He would remind me though His church, His word, and through people, that it is unwavering.

At first I believed that being a Christian meant that because of confession and belief, I had a clean slate, and I had to strive with all I had to keep from messing up again, but messing up came rather quickly.

Messing up came rather quickly.

Beginning my first year of college, I was excited for what God would have planned for my life. I had just experienced serving at a children’s retreat as a counselor, I actively served in my church, and I was part of a small group. Things changed when I was offered to attend an all-expense-paid “retreat”.

My mind was impressionable and the “retreat” I thought I was attending was a cult called Landmark Forum. The cult attested that they could bring about positive, permanent shifts in the quality of my life and that I could create power, freedom, full self-expression, and peace of mind for my future. And although I had felt all that was promised, those three days of being alone with people who fed me lies was the breaking point that caused my latent bipolar disorder to arise.

By the holiday season of 2010, I was diagnosed with bipolar 1 after being observed in a psychiatric ward for emotional and mental instability. The irony I found while being at a psychiatric ward was that I was trying to “return” to being a normal functional human being in society while being surrounded by peers who had issues that only reinforced the idea that I was “crazy”.

Accepting my bipolar disorder was difficult. Having a mental disease, to me at the time, was like having a tattoo etched on my forehead that read: “mentally ill”. My first year with bipolar was scary. I chose to abandon the idea that taking medication for life was going to help. Instead, I adopted my own belief that if I no longer took my medication, my diagnosed bipolar could be forgotten.

It was at my lowest depression that I stole that scalpel from school and cut my arm over 80 times. Then at my highest mania, I remember believing my family was demon possessed, and that I couldn’t die even while bobbing and weaving through traffic at a high speed.

When I look back, I appreciate all the experiences that shaped me, both good and bad. I understand that the trials of life are things we never grow out of; sometimes they are the obstacles we must daily overcome to become refined into the people we are meant to be.

There are still days when I once again have to face the demons of my past. No matter how weak my mind is to the devil’s lies that tell me to stop fighting, to never get back up when I fall, I am reminded of God’s work in my life connecting me to lives I’ve been privileged to know.

I am reminded of God’s work in my life connecting me to lives I’ve been privileged to know.

Today I see my scars as a reminder not of a painful past, but of God’s faithfulness.

Our scars can tell two stories, one of hope for what God has saved us from, or one of sorrow over our experiences of suffering and pain. The way I see joy is much like my scars. Every day I experience what God has given me. I can either be joyful or not. Much like how I see my scars telling a story of the redemption that may encourage people, I take every day God gives me as a blessing.

Joy is a choice. One I choose to make every day. Facing the greatest griefs, the greatest struggles, or even the most overbearing obstacles, I believe joy can be experienced if I allow myself to see where I am from God’s perspective.

Joy is a choice. One I choose to make every day.

He never left me alone in my own sufferings. He patiently waited with a tender heart and arms wide open to receive me back, and that joy that I experienced has become my greatest strength and power amid the many trials of this life. 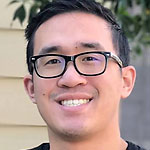 Andrew Tran is a nurse assistant at Kaiser Permanente. He enjoys writing poetry, dancing, fishing, and paying it forward. Figs are his favorite fruit and he has a strong distaste for parades.