SPIRITUAL GIFTS were not for people like me. I had always defined gifts in terms of one’s abilities and talents. But I was not good at things like encouragement, faith, or service. It seemed that only the most faithful Christians or those specially called by God were granted such qualities. Since neither situation applied to me, I believed spiritual gifts were out of my reach.

I believed spiritual gifts were out of my reach.

I knew very little about spiritual gifts when I devoted my life to Christ in high school, but I was enthusiastic about serving. I prepared Bible studies, led worship, and arranged social activities for my youth group fellowship. Because I had already been friends with everyone in the group, leadership was fun and not very hard.

College was different. I did well in my classes, but felt that I failed to measure up spiritually. I joined the choir and co-led a body worship group, which was fulfilling at first. But the heavy load of schoolwork soon made keeping commitments challenging and I started to burn out.

I prayed to God for strength and guidance, but my peers and the leaders who came before me seemed more faithful and better suited for the job than I ever was. I often felt like an imposter, saying and doing what was expected without always feeling it.

I thought perhaps I struggled because I had no spiritual gifts. Maybe I wasn’t strong enough in my faith or didn’t pray enough and that was why God chose not to bless me. I couldn’t think of any talents or traits that corresponded to a single spiritual gift. Many, such as encouragement and evangelism, appeared to be intended for extroverts, while I was shy and introverted. I felt underqualified for others, such as teaching and leadership. I began to question my role in the family of God.

Maybe I wasn’t strong enough in my faith or didn’t pray enough and that was why God chose not to bless me.

After college, serving the Lord became even more challenging. Life got busier as I plowed my way through medical school, graduated from residency training, and joined a busy neurology practice. My supply of time and energy became so low that I was no longer actively serving. Church attendance was unpredictable due to my fluctuating work schedule, which often involved nights and weekends.

The desire to serve was still there though. I loved to sing, even though I had no special talent. I sometimes envisioned myself joining the worship team, but I was afraid of embarrassing myself, and attending regular rehearsals was out of the question. Several church members tried to recruit me to teach children’s Sunday school, but I was clueless about kids and scared of working with them.

Although I understood the wisdom behind the saying, “Step out of your comfort zone,” I viewed my past experiences in college as a cautionary tale. I was afraid of repeating the cycle of commitment and burnout and taking on tasks that did not suit me. I actually hoped that people would stop trying get me more involved, so I wouldn’t have to keep telling them “No”. I was at a loss as to how to serve in the body of Christ.

I was at a loss as to how to serve in the body of Christ.

The demands on my time and energy took their toll on my personal life as well. Since my husband was also a physician, dinner plans had to be streamlined and convenient enough to accommodate our busy schedules. My husband was an avid cook, but having the time to spend in the kitchen was a luxury for him. My own skills were rudimentary and consisted of boiling noodles and sautéing vegetables. It was easier to order out than to prepare something at home.

But we both loved good food and eating quick bites, and frozen pizza got old pretty quickly. And as a neurologist who treats stroke patients, I saw the long-term effects of poor dietary habits regularly at work. I knew that if we continued with our current lifestyle, we would suffer for it down the road. Something had to change. So I decided to learn how to cook.

With no time to attend classes, I devoured articles, blogs, and online videos about culinary concepts and techniques. My husband gave me pointers from time to time (and was a most willing taster), but I was pretty much on my own.

I had loved food all my life; I raved about food so much that a friend once told me I was “obsessed with food”. So as I was learning how to cook, I dreamed of the fragrant aroma of pho broth and the al dente bite of fresh homemade pasta. I was determined to master every recipe I attempted. Comments like “That’s really hard to do right” or “That sounds like a lot of work” were only challenges that spurred me on.

It wasn’t easy. While learning to cook new dishes could be fun, it often felt like a chore. Sometimes the effort of toiling for hours in the kitchen left me exhausted the next day. But with single-minded persistence and my husband’s encouragement, I graduated from boiling store-bought dumplings to preparing entire Thanksgiving feasts in three short years.

Although mastering recipes was satisfying, it was sharing my creations with others that made cooking worthwhile. At first, I was thrilled when my husband smacked his lips and wolfed down the lasagna I had made, but I found myself wanting to spread the joy of food to more and more people.

I began to realize that cooking was a gift that was not meant to be kept close, but to be shared as generously as possible. We invited over church friends we wanted to get to know better. I sometimes hosted the women’s Bible study, which met over dinner. My husband and I held cookouts at our home for our church’s young professionals’ fellowship during summer months. Friends who had moved away jokingly referred to us as “The Wong Bed and Breakfast” because they knew they could depend on us for a good meal and a place to stay.

Cooking was a gift that was not meant to be kept close, but to be shared as generously as possible.

Because many of my friends and acquaintances also cooked and hosted, I did not think there was anything particularly special about what I was doing. So I was surprised when a friend observed that I had the spiritual gift of hospitality. She was trying to find ways to involve more church members in service, and she thought that I might be interested in helping to provide snacks after Sunday service.

I was surprised when a friend observed that I had the spiritual gift of hospitality.

“Oh no,” I thought, “another commitment for me to fail at keeping.” But then it dawned on me that I did not have to feel like a spiritual superwoman to have a spiritual gift. God used this opportunity to show me what I could not see for myself. So in the end, I agreed to my friend’s request.

I believe God works through us just as Jesus worked through the small boy who had five loaves of bread and two fish in John 6:1-14. There was nothing special about the boy himself. Even the disciples were dismissive of his offering — how could such a small amount of food possibly feed five thousand hungry people? But Jesus took what the boy had and multiplied it until his gift overflowed in its abundance.

None of us has anything that God needs, but through His power and grace, He grows our meager offerings in ways we can’t even begin to imagine for His glory. When I felt I didn’t have what it took, God took my love of food and transformed it into a passion for creating a space where people could feel welcomed and be nourished physically and spiritually.

He grows our meager offerings in ways we can’t even begin to imagine for His glory.

Learning about my own spiritual gift has taught me to think, not in terms of what I couldn’t do, but in terms of what God can do through me. Spiritual gifts are given to us by God, not earned. Knowing that God’s power far exceeds mine freed me from much of the insecurity and fear I have felt about serving.

I no longer have to force myself to do things in order to seem spiritual or because I feel obligated to do so.

As a result, I’ve started to take greater ownership of my involvement in the women’s Bible study and my role at church. I know there is more He wants to do through me, even if I don’t know what it is right now. And that’s OK. The most important thing is for us to simply come to God, so He can multiply and use who we are for His glory. 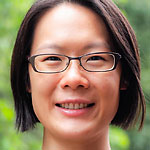 Crystal Wong is a physician in Pittsburgh, PA. She enjoys good stories, and she looks for opportunities to tell them, too. Visit her website at thewritersprogress.com.