Home Is Where the Heart Is

When severe rainstorms destroyed their beloved home, Anne Hu and Luke Hsu discovered a new home in an unexpected place.

IT IS OFTEN SAID, “Home is where the heart is.” For us, “home” was located on a beautiful one acre hillside lot in Loma Linda, California. This was the home we were going to raise our children in. This was the home that would allow them to attend the same high school that Luke graduated from. And we were already five years into our commitment of paying off the home within fifteen years.

On December 20, 2010, we were evacuated from this home due to seven days of continuous rainstorm that caused damage to the house and hillside. What was once a beautifully-set hillside neighborhood of homes was no longer recognizable — the rain had caused multiple mudslides to cover the entire area in brown, leaving debris everywhere.

The rain had caused multiple mudslides to cover the entire area in brown, leaving debris everywhere.

Streets were flooded with mud and entire neighborhoods were unreachable by regular vehicles. In order to clear the roads in the severely affected areas, the city used bulldozers for over a week. Our son’s playroom (our family room) was filled with mud, branches, and portions of an irrigation system. One side of the home was barricaded by liquefied earth reaching 3.5 feet high.

What normally should have been a joyous and peaceful time of celebration (since Christmas was right around the corner) became a time of complete and utter chaos! But while Luke was shoveling dirt off the driveway on Christmas Eve, he had a vision of the crashing mudslide occurring while our son was playing in the family room with his toys. The realization hit him that though he had instantaneously lost a significant number of his material possessions, God had protected and spared his most priceless blessing, our son.

At the same time, I was in my third trimester of pregnancy with our second son, questioning why God would grant us the blessing of a second child, yet remove the shelter in which we were preparing to nurture this child.

Despite the visible damage, the reality of the situation didn’t hit us until the fire marshal posted a red tag on the home and declared it to be an unsafe place for habitation. In order to remove the red tag, the geotechnical engineer quoted a total of repairs amounting over $100,000.

We were crushed. We did not have emergency savings that could handle that amount for repairs. With no other options, we decided to return the home to the bank, in what is known as a deed in lieu of foreclosure. The home in which we had placed all of our family’s dreams was no longer ours.

The home in which we had placed all of our family’s dreams was no longer ours.

Family members were the first to step up and help us. After living in a hotel for two weeks, we were invited to stay with my cousin in her condo — rent free — indefinitely. We were relieved to have a home where we could welcome the birth of our second son. Two weeks after his birth, Luke’s parents surprised us by purchasing a home for our family to live in permanently.

We were grateful for the extent of our family’s generosity and support, but we weren’t entirely surprised. My cousin and Luke’s parents are all fellow believers, and we had always been taught that taking care of family in all circumstances was important. After all, blood is thicker than water.

Accepting help from family was one thing, but we didn’t want to involve our church community. We had left this church five years ago, after having served there for one and a half years. We had rejoined the community within six months of the disaster. Somehow, it didn’t feel right to be new members of the community and to need their help.

Somehow, it didn’t feel right to be new members of the community and to need their help.

Additionally we thought we had things “under control” with our families’ help and did not want to involve the church.

Despite our best efforts at keeping our home situation hidden from our fellow church members, the word still got out. Someone had overheard one of our parents talking over the phone and news spread quickly.

Soon after one church member found out, the church took the initiative to grant us a $1600 check from its “care funds”. We were completely taken aback and deeply touched by the willingness and financial generosity of the church that we had recently rejoined.

But we were embarrassed to receive the gift. We were raised to be self-sufficient! There were others in developing nations who were less fortunate and warranted this type of assistance. And we still had our stable careers and were already being helped out by our parents and extended family. We just wanted to put the situation behind us, to forget and move on, without feeling like our church’s charity case. So, we withdrew the $1,600 and immediately wrote a check for the same amount, returning it as a tithe to the church.

But we were embarrassed to receive the gift. We were raised to be self-sufficient!

Many families from the church continued to try to help us. Some gave us cards with cash or gift cards inside. Others invited us over to their home for meals and prayed for us. Still others attempted to connect us with professionals to advise us how to interact with the mortgage company.

Yet, we felt “undeserving”. Why would these people who knew little about us give us so much? On one hand, we understood that it was because they loved God and loved others, and that they were putting the first and second commandments into action, as well as instructions to share with those in need. (Romans 12:13)

Yet, we felt “undeserving”. Why would these people who knew little about us give us so much?

We still felt awkward receiving and accepting those monetary gifts. However, our pastor convinced us that this was one avenue in which God would employ people to love one another and walk alongside each other during times of hardship. We wanted to display our deep gratitude for their extreme generosity and hosted a thank you lunch.

We were deeply grateful for these families who demonstrated God’s love to us in a very concrete manner, but how could we express that kind of gratitude? Was it enough to just say “thank you” to people who had literally helped us get back on our feet?

We constantly caught ourselves with the mindset of debt — because they did something for us, we were indebted to them. We had the opportunity to repay some of the couples by granting them gifts upon the arrival of their own newborns.

We constantly caught ourselves with the mindset of debt — because they did something for us, we were indebted to them.

Gradually, it became apparent that we would not encounter timely opportunities to give a gift in return to every couple who had given something to us. At this point, we were forced to let go of our Taiwanese cultural traditions and accept their gifts as gifts from God. By definition, a gift is “something that is bestowed voluntarily and without compensation”. The power of cultural tradition and upbringing is difficult to break. As a young child, receiving gifts freely was seldom modeled in my Taiwanese family. There was often a certain form of regifting.

To this day, it remains difficult to receive a gift without compensating it. However, this whole process has allowed us to better identify with and give gifts to those who have experienced loss in some form.

Ultimately, the most important lesson we learned was not related to the giving or receiving of gifts. The truth that we gained from this journey was that our God is good all the time. We, in our human limitedness, think we know what is best. Furthermore, society has convinced us that we are entitled to “health and wealth.” We are sinners who deserve nothing from a holy and righteous God. But because of his great mercy and compassion, we have unmerited favor from God. Job 1:21 says, “Naked I came from my mother’s womb, and naked I will depart. The Lord gave and the Lord has taken away; may the name of the Lord be praised” (NIV). God is good when blessings occur and even when calamity befalls us.  Praise the Lord.

We, in our human limitedness, think we know what is best. Furthermore, society has convinced us that we are entitled to “health and wealth.”

Today, approximately four years later, we are raising our children in the home purchased by our parents. We have felt the abundance of God’s love and provision. We are thankful that not one person in our family sustained any bodily injury from the mudslide. We are thankful for the many friendships and relationships we have cultivated through this loss and change of residence. We are thankful for God’s blessing upon Luke as our change of residence decreased the length of his daily commute. However, we continue to experience the financial consequences of this event such as our continuous ineligibility to qualify for specific financial transactions. 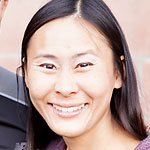 Anne Hu is a speech pathologist who enjoys spending quality time with her two sons (ages 7 and 4) and volunteering at their schools. She and her husband Luke have been married for almost 11 years. They plan to become involved with Habitat for Humanity in the coming months. 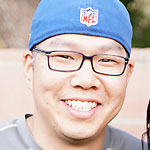 Luke Hsu is an inpatient physical therapist who enjoys mountain biking, grilling/eating BBQ, playing drums and basketball. He and his wife Anne have been married for almost 11 years. They plan to become involved with Habitat for Humanity in the coming months.