Part of 6 of in
BY KATELYN DIXON
illustrations by IVY CHANG
Dec 01, 2016 | min read
Part of 50: Homeland
9 Snaps
9 0 Snaps
Oops! Something went wrong while submitting the form.

As a transnational adopted person, Katelyn Dixon hoped that visiting her orphanage would help her find a sense of belonging.

IT LOOKED NOTHING like the photos my parents showed me when I was a little girl.

The building was no longer a salmon-y pink with large, red Chinese characters adorning the entrance. There were no caretakers rushing around, babies crying and whining, or families awaiting a new child.

Instead, before me stood a sad, gray building covered by overgrown shrubbery. I walked gingerly through a sparkling sea of shattered glass, praying no shards would pierce my sandals, even though the state of this place already pierced my heart. As I continued to explore, I was greeted by a cold breeze flowing through shattered windows, a jungle of wires dangling from ceilings, the creaking of doors hanging on by one hinge, and a pungent odor of debris and trash littered on the floor.

What happened here? Was this really my orphanage?

Was this really my orphanage?

A few months before traveling to China, I looked through old photos of the day I was adopted. My favorite one: a group shot of my soon-to-be parents — a Japanese American and Hungarian American interracial couple — with nine other families standing outside the Children's Welfare Institute in Zhuzhou, Hunan Province, China, time-stamped October 4, 1994.

I could only imagine the weight of the moment the photo captured; I found myself smiling as I stared at emotionally exhausted, yet excited, new parents putting on a smile for the camera 21 years ago. As my eyes soaked in all of the details from the photos of the city and my orphanage with new intensity, I repeatedly thought, I'm coming home.

I had not been back to China since that photo had been taken, and honestly, I had no intentions of returning until my third year of college.

I knew I was adopted my entire life, but I had never given it much thought. It was merely a "fun fact" I shared about myself for icebreaker questions until God opened my eyes to the beautiful complexities of adoption: the deep pain that comes from the loss of culture, a family, my first identity; the frustrating in-betweens of never feeling "Asian enough" nor "white enough"; the ugly racism that I had internalized toward people who looked like me; and the divine purpose of adoption itself.

I knew I was adopted my entire life, but I had never given it much thought.

In the midst of all the confusion, anger, and unanswered questions, God was inviting me into a deeper relationship with Him to experience who He had created me to be, more fully and completely. God had much more in store for me as a transracial adopted person than I could have ever fathomed.

At the end of that year, God presented me with an opportunity to continue exploring my adopted identity through InterVarsity Christian Fellowship's Global Project to China, a six-week mission trip focused on sharing the good news cross-culturally.

The trip was very timely after struggling through a tough year, and I felt God's invitation to heal. There, I learned more about Chinese culture, how to love sacrificially, and how God can use the fun and light-hearted moments to teach me. After I was accepted as a participant, I never questioned whether or not I would visit my orphanage after the Global Project ended.

Somehow, in my mind, I had already decided I was going to do so regardless of the realities of not knowing how to arrange an orphanage visit nor how to speak Mandarin. I quickly realized that I could not travel alone. Faithfully, God, in His provision, sent me the perfect traveling companion — Kelsi, a fellow adoptee from Zhuzhou who had visited our orphanage a few years before.

The more I thought about my upcoming journey, the more I gave myself permission to dream, muse, and create meaning for a previously mysterious land that I had never given a second thought. China wasn't just my birth country, the name that was repeatedly brought up while filling out official documents. It suddenly began to take on new meaning — I was going home.

China wasn't just my birth country, the name that was repeatedly brought up while filling out official documents ... I was going home.

This new relationship to China came with many hopes; I kept my expectations to myself like secrets, too afraid to share honestly with others because when sharing, I faced judgment from people who did not understand.

"You should be thankful," they said.

"You shouldn't look for your birth parents," they advised.

"That would upset your real parents," they warned.

"Your life is so much better here. Why do you want to go back?" they questioned.

When the dilapidated building stared me hard in the face, I wondered to myself, maybe they were right. What I found was nothing that I had expected.

This was not the home I expected. Disillusioned and disappointed, I left Zhuzhou asking myself, what was the point of returning to my place of birth?

Disillusioned and disappointed, I left Zhuzhou asking myself, what was the point of returning to my place of birth?

It has been a year since my trip to China, and only now have I begun answering that question. Maybe the point of returning was not about what I would find at the end: possible answers to my questions or missing pieces of my "Chinese self".

Rather, maybe the point of returning was the journey itself. I traveled the same path my parents took to a sacred place, where we got to share something significant and truly life-changing. Adoption is something that happened to me, and I am still learning how to claim that identity for myself, in all its complexities, with pride, with loss, and with more questions.

Adoption is something that happened to me, and I am still learning how to claim that identity for myself.

I cannot help but still consider China my home — a home where I lived for six months, a home where I might have a family that still misses and loves me, a home of many "what if's".

China will always have a special place in my heart and story. This land is unavoidably a part of how I've become the person I am today, and I dream of returning to live and work there some day.  I am committed to this place so that even this part of my story can feel like home. 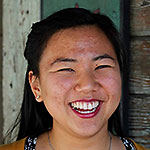 Katelyn Bo Dixon serves as a campus minister for InterVarsity Christian Fellowship in San Francisco. She is a transnational adoptee born in China and raised in Torrance, CA. She loves spicy food, sauce, and sass. She is passionate about unraveling the complexities of adoption and one day hopes to minister to all members in the adoption triad.

Ivy Chang is a designer based in the Bay Area. She came to the U.S. from Taiwan when she was 10 and met her first wild animal in New Hampshire. She is inspired by the exploration and language of life, the little and big moments that resonate with her. Her work often involves anthropomorphic animals and objects as a way of storytelling from a humorous and charming perspective.