A Creative Intervention into Musical Worship

Part of 10 of in
By Jasmine Gui
Photography by Aaron Huang
Aug 05, 2018 | min read
Part of 61: Searching for Hope
36 Snaps
36 0 Snaps
Oops! Something went wrong while submitting the form.

I heard it once, waiting in the silence.
Here I am again to stillness, watching
the first word warm into a shivering.
‍“And It Was Good” (from Sonnet 1)

Peter and I wait for the train to pass so we can resume recording. We’re in his home studio, tinkering around with a music track. We listen earnestly during playback, discussing mood, affect, and continuity.

Months later, Peter and I try to put the pieces together. As we sift through ourselves, what remains clear is the thing itself — a seven-track poetry EP, structured as a sonnet crown, a hybrid word-music exploration of creative worship.

In the firsts of new glory, I look away.
These eyes darkening like rain-hit concrete.
‍“The First Word” (from Sonnet 2)

It starts from our thirst to connect with something in the wilderness of contemporary musical worship. We’re old friends and fellow worship team members, both creative producers: he a musician, I a poet. The EP emerges from a four-year-old conversation Peter and I have, discussing how our own experiences aren’t reflected in the contemporary worship scene. We have difficulty looking for Asian worship leaders who are songwriters of influence. The Christian contemporary worship scene is dominated by a handful of creators, most of whom are white.

The Christian contemporary worship scene is dominated by a handful of creators, most of whom are white.

As we talk about feeling disconnected from musical worship and our struggles anchoring ourselves in a church that doesn’t see a problem, a rough idea for a sonnet crown series begins to form. Preliminary drafts are sent out to Peter, who lays down basic tracks. The EP comes to be known as “A Crown of Little Sounds”.

Written into these poems are cicadas, plastic slippers, coconut and muddy mangroves, the mood of monsoon drenching concrete. The familiar urban merges into the familiar Biblical: the desert and mountain, honey and fire, the rustle of palms waving. As these disparate elements sink into sonnet form, the linguistic landscape becomes a mirror where I recognize in myself the image of God.

How the land tries in mountains, while we in
the shadows cup our ears to stone for a
small voice to speak our hearts into something
like flame, like the weight of a summer day.
‍“There is No Other” (from Sonnet 3)

Translation is not sufficient. Offering the same song in multiple languages does not diversify the structural sources and contexts from which the songs are written. My work is interested in uncoupling and recoupling. Imagination allows me the liberty to break the old apart, and put the new together.

Offering the same song in multiple languages does not diversify the structural sources and contexts from which the songs are written.

Peter tells me that some of the music in this EP is reminiscent of what he heard growing up in the Chinese conservative church. The sound is nostalgic; the organ hasn’t changed. You can bring new sounds and styles, but the organ still sounds like an organ. Yet, the construction of soundscape in “Little Sounds” is a personal attempt to deviate from what he knows.

“I wanted to bring back the idea of being still. These songs are not singable; they force you to listen, force you to sit.”

I consider the possibility of listening as a communal act of worship, where we spend time listening to a diversity of perspectives, each unique in their own way, in praise of the God who is God of all.

My hands are joshua tree in the desert,
and against the charring day we sit,
kindling old history to warm against.
‍“Other Stories” (from Sonnet 4)

Each sonnet in the crown details a particular moment of relationship with our Creator. Sonnet 4, “Other Stories” is the exile sonnet. Peter goes through a ridiculous number of drafts and is stuck. He scraps a completed version after listening to it with me. He doesn’t know where he wants it to go.

The Israelites spent an incredible amount of time in exile, and Peter mentions how God asked them to make a home there, and then He taught them how. That’s not a sound we know how to play, necessarily.

Eventually, Peter picks up a guitar and plays, wandering through chords by intuition. I find it mysterious, how the act of writing about exile leads us into grappling with it in its most literal terms.

“Other Stories” features a layering of my voice to create a choral but lonely sound. In this dissonant collective, I consider how we as diasporic communities know so much about exile, and how even today we are often cut off from possible histories, and possible futures.

The trickle-down effect of being part of the larger continental North American church is that all our worship music is received from this narrow demographic of worshippers. The contemporary worship sound we hear is largely pop, alternatively: rock, country or pacific northwest indie — in all instances, these sounds are grounded in white American music categories. The conservative church adheres to older traditions that crossed from Europe with the first colonial settlers. Either way, the roots of our worship music scene are steeped in the Western tradition. We lose imagination for worship music beyond these categories.

Language bears the shape of its maker, and musical worship as it currently is carries a fundamental absence — us. Peter and I are dissatisfied with this lack of us. Worship is deeply personal and communally practiced, and right now, there are large and crucial communal creative voices missing from the conversation.

As “Little Sounds” begins to hum with new life, it becomes apparent to us. We need new form-makers so we can make new forms.

It hurts when I recognize the new with
a salting finger, a deep red thinning.
I dig up forgetting an undulating
scrape to be made over and over.
‍“Over and Over” (from Sonnet 5)

We talk about “Little Sounds” as a new way of worship that, strangely, is also an old way of worship. The verses in the Psalms were set to music now buried by time, not unlike ancient classical Chinese lyrics that were once written to ubiquitous melodies.

The need for new forms of worship begs the question of alternative forms that are systematically shut out from contemporary worship music. This contemplation draws deeply from old realities, but ushers us into renewed ways of being. Put in perspective, this is a decolonizing process.

The need for new forms of worship begs the question of alternative forms that are systematically shut out from contemporary worship music.

While writing “Little Sounds”, I mourn the erasure of the diverse and wonderful church in these dominant monocultural flows of contemporary worship music.

The truth is crushed pearl I am
swallowing. The truth is pink like young skin
while my throat is the shade of atrophy.
‍“The Truth Is” (Sonnet 6), “A Crown of Little Sounds”

Hope is an expansion of possibility. The first time I hear a completed track, I am on a train heading west across Canada. I am transported into the world Peter and I have built. It eludes me, how we manage to make something with no singular referent. In that moment, we move past imitation into the mystery of creation.

Peter says it speaks of God, and we pause to ponder what it might have been like when the earth and everything in it was new. We come to new terms with our identities as image bearers: this yearning in us to make new, and the ability to do so, because all of us bear the image of Creator God.

Language matters. It forms the world we take into ourselves, and changes our understanding of the world we are in. Worship is a recognition of God in relation to the world and us, and when we find new language, the spirit of worship is renewed as well. The more language we have for worship, the larger God’s world becomes.

Language matters. It forms the world we take into ourselves, and changes our understanding of the world we are in.

I long for the musical worship of the world everywhere to overflow with a multiplicity of voices. It is not enough for us to sing in collective, if the world we sing of is built by only a few.

Stillness is the loose silt of all questions,
steeping into the roots at our wrists
like new light growing old.
‍“Side by Side” (Sonnet 7), “A Crown of Little Sounds”

“A Crown of Little Sounds” is formed like a spiral. We record the last sonnet and the first sonnet back-to-back to musically forge the circular sound of the EP. Both these sonnets use the same musical elements, played in different ways. We come into the Sabbath, and emerge into the completeness of solitude and communion after going through the five sonnets in between: creation, covenant, exile, redemption, and repentance. The departure is also the start of a homecoming, and the familiar sounds in “Side by Side” signify the return. Hope is laced through the journey of listening, prayer, and walking, breathing in the music and lyrics. Hope asks hard questions and contemplates with no answer. Hope persists through the spiral to encounter and reencounter.

Welcome to the end that is always also the beginning. In the here that is there, God dwells.

It is not enough for us to sing in collective, if the world we sing of is built by only a few.

You can listen to “A Crown of Little Sounds” by visiting http://p40collective.ca/collabincubator/a-crown-of-little-sounds/ep-release.html. 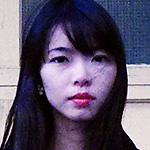 Jasmine Gui (jaziimun) is a Singaporean-born interdisciplinary artist, living and working in Tkaronto. She is the founder of Project 40 Collective and managing editor at LooseLeaf magazine. Her work has been featured in The Spectatorial, Panorama Journal, Hart House Review and others. Her poetry chapbook, “boke”, was published in 2017.