How to Be an Asian American Pastor

Andrew Ong shares how journeying with a nondenominational Christ while interacting with several denominations affected his journey in becoming a pastor. He currently subscribes to Reformed theology, and his is but one path struck in the pursuit of faithful pastorship.

Seventeen years ago, 10th grade me walked into my senior pastor’s office. There, I nervously shared with him that I thought God was calling me to be a pastor. I began to cry as Pastor Steve prayed over me. Looking back, I don’t quite know why this was such a dramatic experience for me. Perhaps I was in awe to sense such a high calling, or maybe it was the gravity of the moment and anxiety over what this would mean for my life. Regardless, I remember it vividly — a marker of sorts for my calling into pastoral ministry.

There were little bits and pieces that went into this sense of calling. For one thing, I thought it was super cool that my youth pastor got paid full-time to take us to camp, shoot us with water guns, and tell funny jokes and cool stories in youth service. I also found myself wanting to share what little Christian wisdom I had with friends dealing with various sorts of teenage drama. And I really did love seeing people worship as I strummed my guitar and sang my heart out on stage. Maybe one day I could encourage people to worship through preaching as well.

But not only did I sense a calling to lead, counsel, and preach, but a particular calling to lead my people. The people of Bay Area Chinese Bible Church — nondenominational Chinese American Christians.

While I imagined taking kids to camp, I imagined binging on Pocky, ramen, and Shrimp Chips with them late into the night.

When I imagined situations of pastoral care, I imagined counseling self-identifying model minorities whose lives didn’t end up as smooth and linear as they’d hoped.

And when I imagined preaching, I imagined proclaiming the good news of Jesus, who overcame our shame and honored us by removing our sins and raising us to new life.

This sense of calling only grew in college. Eager to take the next step in my spiritual journey, I sought out what I believed to be the most passionate Christian community, filled with people who deeply cherished and studied the Scriptures.

Down at University of California, Irvine (aka the University of Civics and Integras), I found this among a tight group of Korean American Christians. They called themselves Berean Community Church, a Southern Baptist congregation inspired by Acts 17:11 — “Now the Berean Jews were of more noble character than those in Thessalonica, for they received the message with great eagerness and examined the Scriptures everyday to see if what Paul said was true.”

It wasn’t merely head knowledge that they were interested in. They loved to worship God, raising hearts, hands, and voices to the God they devoted themselves to studying. And how they would pray! I can still picture them kneeling on the floor in a dimly lit room. I can still hear their choked-up cries unto God.

It was here where I was taught that the chief end of man is to glorify God by enjoying him forever. It was here where I cultivated spiritual rhythms and patterns to walk closely with God in intimate community. And it was also here where God gave me a heart for the poor, the marginalized, and the lost.

Additionally, I learned about the Korean American immigration experience, the Korean American church culture, and the similarities and differences between East Asians. I discovered my preferred choice of soondubu, that H-Mart is far superior to 99 Ranch, and yet that all Asian Americans are united in their love for boba, California burritos, and AYCE sushi.

I recruited as many Chinese students from NorCal as possible, introducing them to the Good News of Berean. Today, the church is a Pan Asian church, with Chinese people making up the largest demographic. While many white evangelicals around the nation were looking for ways to attract people of color and make their churches more multi-ethnic, Koreans, Chinese, Japanese, Filipinos, Vietnamese, Thai, and even Hmong believers were already gathering regularly to worship at Berean.

This wasn’t just an Orange County phenomenon. I saw it happening all over California, wherever large pockets of Asian American communities could be found. God was moving, and I wanted to take part.

God took my initial calling to the Chinese American church and gave it more depth and vision. This was something bigger than me, bigger than Bay Area Chinese Bible Church, and bigger than Berean. God was doing a work amongst Asian Americans, but also using Asian Americans to do a work upon his church.

When it came time to leave Orange County for Westminster Theological Seminary in Philadelphia, I was brimming with excitement.

Westminster was a new experience to me in a variety of ways. Coming from the Bay Area and Orange County, it was actually my first time attending a school where Asians were not a majority. This was an experience I needed, and I waded even deeper into this experience by joining Grace Church Philly, a small urban Evangelical Free Church of America in Northeast Philly, filled with Puerto Ricans, African immigrants, and long-time Black and white residents of Philly. Every Sunday, I worshiped with those who had little to nothing in common with me culturally, educationally, and financially. We did not share similar friends or types of friends. We had drastically different family stories and backgrounds. And we often did not speak the same spiritual or even primary language.

There was great beauty here in all the diversity. I witnessed an ex-convict restored into the church and reunited with his family. I witnessed a Pakistani man weekly proclaim his belief in God the Father Almighty, reciting the Apostle’s Creed loudly and proudly in Urdu. And I witnessed Black and white families loving and serving one another.

But there was also a sense of loneliness and disconnectedness for an Asian American like me. This wasn’t going to be a worshiping community where we would grab pho after church or take off our shoes upon entering one another’s living spaces. For the first time in my life, my most intimate friends were not in my church. Rather, they were my fellow Asian friends in seminary.

This experience was recapitulated when I moved to Scotland for my Ph.D. in World Christianity. Was I to immerse myself in the Scottish culture and attend the Free Church of Scotland to broaden my horizons, or was I to attend the small, insular, and nondenominational Chinese church to satisfy my cultural cravings?

Upon my return to the States, I unexpectedly but gladly entered into conversation with my home church about joining the pastoral staff. Perhaps God had brought me full circle. I certainly thought that all my experiences up to now were meant to be brought back and shared with my original people.

So where would I go? How was I to be an Asian American pastor?

This past Good Friday, this 31-year-old Asian American pastor-in-residence found himself embracing a 62-year-old white woman who was deeply wounded by her White Anglo-Saxon Protestant (WASP) male authority figures. As he prayed over her, tears streaming down her face and her snot dripping onto his shoulder, a new sense of calling emerged.

In this moment, he had become a kind of Asian American pastor that he had neither expected, nor wanted to be.

But in this moment, he was sure that this was exactly the kind of Asian American pastor that God wanted him to be. 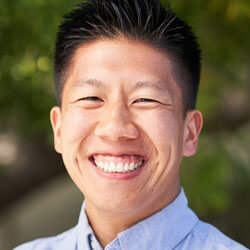 Andrew Ong serves as the pastor in residence at Christ Church Berkeley. Currently, he is working to complete a Ph.D. in World Christianity at the University of Edinburgh on Chinese American Evangelicals. In addition to Jesus, Andrew loves snuggling with his baby girl, feasting with his and his wife’s families, hooping with his long-time #DubNation bros, and smiling.