Over the last four years, my relationship with my now-husband, Greg, has helped me unearth and identify the differences and lies within my own Asian ethnic identity. I am biracial, Black American, and second-generation Filipina.

While living in America, I grew up loving my Blackness and being confused about what it meant to be Filipina when I do not speak the language, know the culture, or “look” the part. On the other hand, Greg is second-generation Cantonese, whose parents went to graduate schools in the U.K. and migrated to the U.S. in the 80s. He speaks Cantonese, grew up in a Chinese immigrant church, and works in college ministry with Asian and Asian American students who are working to restore their ethnic identity. You may wonder how our ethnic identities have shaped our journey to marriage. My relationship with Greg has been formative in helping me to engage God to understand and restore my beliefs of what it means to be Filipina.

When I joined the staff of InterVarsity, I thought that Greg seemed like the perfect Asian in our region. As an East Asian man, he had planted the first Asian and Asian American chapter in the region, gone home during the holidays to spend time with his parents, and led our Asian staff gatherings. For those unfamiliar with InterVarsity, it is an interdenominational campus ministry that desires to see God’s multiethnic kingdom on earth (specifically college campuses, then the world) and for every staff, student, and faculty member to know that they are seen and loved as the ethnicity that the Lord has given them.

My own InterVarsity college experience was knowing that I am Black and attending Black Christian student conferences, and then knowing that I am also Asian and going to Asian Christian student gatherings. For example, in the Black Christian gatherings, students would share their ethnic background and vulnerably process how they have been seen or unseen on campus and in life. As a listener, I would process similarities and differences to my ethnic identity journey. God revealed to me in these gatherings that my mixed race Blackness is included in being Black, especially when I am unseen in my Blackness.

Similarly, in the Asian Christian gatherings, I realized the unearthed hurt I felt from not being seen as Asian or being Asian enough in this world because I am mixed, while simultaneously feeling welcomed and embraced by my Asian brothers and sisters. In both gatherings, I felt a deep connection to all my mixed race brothers and sisters because we never felt whole or fully welcomed into Black or Asian spaces.

Those four years were the first time I was able to open my eyes to my ethnic identity having anything to do with Jesus. I left college knowing that I should care about my ethnicity just as InterVarsity and God do, because my ethnicity is a gift from God regardless of what society and culture tell me. #FACTS.

At the start of our friendship, Greg purposefully made a way for me to go to InterVarsity’s triennial Asian American Staff Conference. The year before, many Black staff interns were not permitted to attend a staff conference, so Greg asked our supervisors to allow me and another Asian staff intern to attend this conference. All of his efforts persuaded me to actually attend the conference, since I had not made a decision yet.

I was excited and also deathly afraid of being around SO MANY Christian Asians for four full days. I knew the Lord was encouraging me to deepen my ethnic identity journey, but I had only been in Asian Christian specific spaces two times a year for two days each time. I felt a lot of tension, fear, and discomfort toward the unknown. Despite these feelings, I went to the conference, and was further encouraged by Greg to attend multiple seminars, talk to many staff, and most importantly, engage and sit with the Filipino staff.

Greg and I began dating that year, a few months after that conference, and that was a risk. Not only because he was my coworker, but also because I had never dated an Asian man until then nor had he dated a Black (and Filipina) woman until then. The beginning of our relationship undermined the lie that we would never be accepted by someone of the other’s ethnicity and culture. Greg and I noticed that our unimaginable relationship was truly healing and redemptive of God’s deep love for us, specifically around our ethnicities.

Within the first year, Greg impressed my mother by knowing some Tagalog words and Filipino expressions, which made me moderately jealous and sad that I did not know them. Greg had learned this from his work with Asian students, some of whom were Filipino, so it made sense why he knew certain words and expressions, but it also made me feel inferior as a non-Tagalog-speaking Filipina. These interactions immediately brought up insecurities in my ability to be Asian or Filipina enough.

Moreover, like most second-generation kids, Greg spoke to his parents in their native language, Cantonese. I did not have the same opportunity as a child and felt a disconnect with Filipinos and even other Asians because I do not speak Tagalog. From conversations with my mother, I learned that she chose not to teach my siblings and me Tagalog out of fear for how English-speaking Americans would treat us, because of her own experiences of being judged for her accent and for speaking Tagalog to other Filipinos. I am grateful for her care for my siblings and me, but also saddened by not being able to connect to Filipinos in our native language. The reality is that I can still learn Tagalog today if I choose to, and also be confident that not knowing Tagalog does not make me any less Filipina.

As I got to know Greg better, I learned more about his parents and his upbringing regarding hospitality. I began to recognize both similarities and differences of our contexts and ethnic identities. I noticed that my family was informal and relaxed, while Greg’s family was formal and specific. While both of our Asian cultures have a love for hospitality, they are enacted differently.

Whereas Greg’s parents have high expectations of their roles as hosts — as demonstrated by how they arranged a schedule for my first visit with them — my parents are more casual — they like to have people over to care for and host with lots of food and less of a schedule. My mother is this way because though she grew up poor, her father told her, “We may not have money, but at least we can give a good meal.” To this day, when anyone comes over, she will ask if they are hungry or want something to eat. Greg’s family showed me a different value in hospitality. As Greg and I moved into marriage, we noticed our own preferred method of hospitality. I consider hospitality to be a clean, welcoming, and fun space to invite others into. Greg considers hospitality to be superb food and drinks provided. Together, we desire to integrate both of our Asian cultures’ hospitality into our new family.

For our wedding, Greg helped me integrate more of my Filipina culture; for example, he and his groomsmen wore barongs (traditional Filipino formal wedding shirts) and we served lechon (roasted pig) to our guests. Before dating Greg, I would have never thought about including barongs and lechon in my wedding celebration, but Greg has helped me see which pieces of my ethnicity I have pushed aside and never engaged.

As Greg and I planned our wedding, we dreamed about visiting his family in Hong Kong and my family in the Philippines a year into marriage. We decided to make that dream a reality, especially for me to enter into my Filipino culture and meet family for the first time. My mother goes every so often, but I had not been to the Philippines since I was 2 years old. In brief, the trip to the Philippines brought so much joy and love for my ethnic culture and history, from having visuals of stories my mother had told me from her time there to meeting my nanay (grandmother) for the first time. The opportunities that I have had to engage my Filipino culture in these past four years have been a true gift from God.

Following Jesus is filled with dying to self and being reborn into who the Lord has made us to be. And in my Asian ethnic identity journey, Jesus is daily making me more whole through my relationship with Greg. In our relationship, he has encouraged me to engage my own cultural and ethnic history. When you are unseen in your culture or ethnicity, it can be easy to choose the option to suppress it and move on, which is what I did throughout the earlier years of my life. Therefore, I am grateful for Greg’s willingness to open his life and culture to me as I navigate my ethnic identity journey with Jesus. 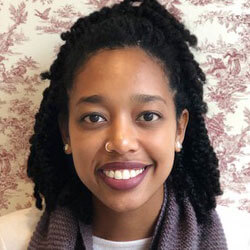 LeLe S. Hsu is the Campus Minister with the Multiethnic chapter at Boston University. Originally from Chesapeake, Virginia and graduated from the University of Mary Washington with a B.S. in Mathematics. LeLe is biracial, 2nd generation Filipina and Black American, and that has encouraged her to minister to multiracial and marginalized students, and help them know that they are made in the image of God and their ethnicity is good and valued.