Is There a Future for Evangelical Theology?

About five years ago, I published “The Future of Evangelical Theology: Soundings from the Asian American Diaspora” (IVP Academic, 2014). I was motivated in that book by the observation that the so-called center of gravity for Christianity had shifted from the Euro-American West to the global South (Asia, Africa, and Latin America) and that even in the North American hemisphere, Christianity is holding steady at best because of immigration — particularly those already Christian or open to conversion to the host country’s religion. In my mind, then, the future of evangelical theology would follow these demographic shifts: from being dominated by European and American authors and thinkers, to seeing the emergence of a wider range of voices from these other parts of the world. My contribution, hence, was to suggest how considerations of globalization and especially Asian migration might chart trajectories for evangelical theology for the next decade or more. My own story reflects this as a 1.5 generation Malaysian-born but American naturalized citizen brought to this country by Assemblies of God ministers who came in the mid-1970s to pastor and serve among Chinese-speaking immigrants in Northern California.

Developments in North American politics, however, have raised doubts in my mind about whether there is any future for evangelical theology at all. Prior to 2016, even with millennials noticeably leaving the church, there were also efforts underway to reconceive the nature of Christian mission away from its colonial “West-to-the-rest” character toward the social and environmental issues to which today’s younger generations were rightly concerned about and committed. Such reformulations stood a chance of stemming the tide of young adults leaving their Christian roots. But the 2016 presidential election laid bare the truth that the evangelical church, at least in the United States, remains in the grip of an older white demographic — 80 percent of which voted for Donald J. Trump with almost as many, two years later, persisting unwaveringly as the core of his base of supporters, even when others have abandoned the GOP as scandal after scandal has been uncovered and he either cannot or will not embrace the task of leading all Americans. To be sure, evangelicals long committed to certain social issues have been rewarded with the appointment of conservative judges — including two supreme court justices — and no longer feel as marginalized by secularizing forces and the so-called liberal media. However, these gains have come at a steep cost: an alliance with a president who sees himself as above the law and support of policies that are questionable at best and contrary to the gospel of Jesus Christ at worst.

It is not just a matter, then, of attempting to redeem the evangelical label; rather, what has become clear is that self-identifying evangelicals have embraced a “Make America Great Again” message that seeks to preserve at least what was once a “white America” from being overrun now by non-white immigrants, especially those from south of the U.S. border. What is particularly striking, at least to me, is that my fellow evangelical Christians (I have considered myself part of the pentecostal and evangelical church for much of my life) claim to be “color-blind” on the one hand, but so easily justify fearmongering rhetoric and xenophobic policies in the name of “border security” on the other. It seems like this is a very short-sighted nationalistic posture when the growing majority of “brothers and sisters in Christ” are elsewhere around the world rather than here in this country. Again, I am reminded: These are white evangelical Christians who are anxious about the transformation of America as they had once known it and believe that there is biblical basis for the “rule of law” conservativism even while being oblivious to how that position translates for people of color in this country when aligning with a white nationalism.

As an Asian American who has lived in this country since I was 10 and now has three biracial children (my wife is Mexican American) and three biracial grandchildren (my daughter-in-law is Mexican American and son-in-law is Caucasian), I can understand why many of my API colleagues would be reluctant to “rock the boat” populated by our predominantly white evangelical movement. We are, after all, model minorities, are we not?! I have come to realize, however, that such popular stereotypes refer less to our working hard to climb the ladder of socio-economic success than to our willingness to acquiesce ourselves and identify with the dominant white culture. We exemplify the kind of subservience that accepts and thereby perpetuates white privilege and rule. More precisely, we model to other peoples of color how to act and think white, how to succeed according to white rules. In short, we accept the normativity of European/white culture and its values. Our internalization of these values is what enables our success in this country. No wonder we are model minorities: By not questioning the values, norms, and perspectives of the dominant culture, we expand its power for whites over non-whites.

Ecclesially and theologically, Asian Americans are model immigrants precisely because they have attended white evangelical seminaries, mastered its discourses, and even performed these as well as our teachers. The Confucian sensibilities of those from or informed by East Asian cultures have mapped nicely onto the theological conservativism of white evangelicalism. Thus, Asian American Christians have gravitated to the evangelical church, accommodating its values in part since such acculturation brings them closer to the center of American culture faster than if they were to resist or interrogate that evangelical message. In other words, again, we are model minorities in our accepting evangelical hermeneutical approaches to scripture and in our defending the basic evangelical theological paradigm, precisely by subordinating our voices, perspectives, and commitments to that of the white evangelical subculture’s interpretations, beliefs, and practices.

As I have reflected more on the API evangelicalism and its host community, however, I have come to see that there is just as much the former can teach the latter as vice-versa, particularly in such a time as we find ourselves currently. Let me give one example: the lesson the API community has learned from being “perpetual foreigners” in the world. This is the lesson most API’s have absorbed along the way: that our phenotypical differences set us off as non-white and therefore aliens to the predominantly white majority in this context no matter how fluent our English, etc., even as our mannerisms set us off as non-Asian in any context on the other side of the Pacific. Yet this perpetual foreigner experience has a great deal to teach us about being sojourners in various biblical senses stretching across both testaments. The patriarchs of ancient Israel were always looking for the promised land, even as much of the rest of the Hebrew Bible was written from the standpoint of the experience of exile under Assyria first and then in Babylon and Persia, or in the aftermath of the return from exile under the latter regimes. Then, the early messianic story unfolds against the backdrop of migration narratives within first century imperial Rome, whether of missionaries taking the gospel to the ends of the earth or of diasporic Jewish believers in Jesus or Hellenistic converts and God-fearing migrants crisscrossing back-and-forth across the Mediterranean world.

Especially in the present time, such a perpetual foreigner perspective can help free us from an idolatrous nationalism, one that privileges imperial (American or Roman) ideologies over the values of the gospel. A perpetual foreigner disposition can enable deeper appreciation of what it means to be in this (polis) world but yet also not caught within its sociopolitical and economic grip. This is not about being unpatriotic, but about recognizing the necessity of taking xenophobic nationalism captive to the gospel that brings together people from every tongue, tribe, and nation from the ends of the earth. This empowers a more radical sense of being aliens and strangers to this world, not one that rejects our API narratives but that lives more fully into the testimonies that emerge from out of that dynamic site. Thus, our personal lives can be enriched as we value the specificity of our journeys rather than continually being deferential as our (East) Asian cultures might commend and as North American culture might welcome. Further, our ecclesial lives can chart more creative and exploratory pathways rather than kowtow to the traditions of our elders, whether Asian or Caucasian. Last but not least, our political lives might be emboldened prophetically according to the call of the gospel rather than being silenced according to the model minority script. In all of these ways, then, the promise of the Spirit of Pentecost can redeem our API tongues that tell of migration, of the 1.5- or second- or third-gen experience, of being betwixt-and-between, all in our own accents.

Come Holy Spirit, upon the API community, and if you do inspire and empower our speech afresh, perhaps there may be a future for evangelical theology after all, including America and the world church. 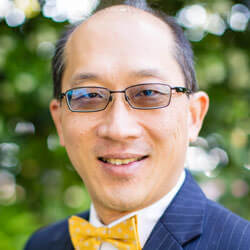 Amos Yong is Dean of the School of Theology and the School of Intercultural Studies at Fuller Theological Seminary in Pasadena, California. His graduate education includes degrees in theology, history, and religious studies from Western Evangelical Seminary (now Portland Seminary), Portland State University in Oregon, and Boston University in Massachusetts. He has an undergraduate degree from Bethany University of the Assemblies of God. He has authored or edited approximately four dozen volumes. He and his wife, Alma, have three children and three grandchildren. Amos and Alma reside in Pasadena, California.