Leading from a Different Lens

Part of 7 of in
By Nikki Toyama-Szeto
Illustrations by Alice Young
Nov 11, 2018 | min read
Part of 62: Money, Money, Money
12 Snaps
12 0 Snaps
Oops! Something went wrong while submitting the form.

I always feel like I am translating the latest leadership advice to make it useful. I rarely identify with the opportunities or challenges that these leaders discuss at length. I’ve had to interrogate these leadership models and organizational strategies because my starting point is so different from many of these leaders. They are cut from a cloth that is too big, from a fabric that is too cumbersome. When I started to expand my view, looking at capitalism through my racial and gendered lens, I also began to see large discrepancies of values and principles with my faith.

There are a few fundamental differences between what the Christian community is called to be and capitalism as an economic model. Capitalism promotes “doing” over “being”. We need to be deeply mindful of these differences when we unknowingly import capitalistic models and methods into our churches and organizations. As Christians, we have to re-think what we borrow from this world.

The capitalistic model is fundamentally about money. It’s about buying and selling and occupying market share with a particular product. Resources, relationships, and opportunities are leveraged for maximum return. I won’t go into issues of serving God and money, but I’m concerned that capitalistic influences in the church have led Christian leaders to conflate the provision of money with the will of God.

Capitalistic influences in the church have led Christian leaders to conflate the provision of money with the will of God.

I’ve seen money being used as a proxy of God’s will at various Christian nonprofits where I have worked. People are affirmed as being “called into ministry” if they are able to fundraise for their work or a project moves ahead because the funding comes. People use money as the revelation of God’s will instead of recognizing that our current financial systems are socially defined and racially motivated. Leaders of color are regularly deemed “unsuitable” for senior leadership positions, because they don’t have the networks to raise the money. There is an accidental link of God’s will to God’s provision of finances. Or perhaps, our society is so steeped in the capitalistic mentality that we have lost our imagination for other ways that God might reveal God’s intentions.

Leaders of color are regularly deemed “unsuitable” for senior leadership positions, because they don’t have the networks to raise the money.

What if leaders were chosen for ministry because of their “fruitfulness” rather than their ability to raise cash? This fruitfulness could be seen either in their ministry, their impact as leaders, and their depth of connection to God.

My assumptions were challenged when I supervised a Latinx staff member; I noticed that his fundraising bank accounts didn’t grow as fast as that of other ministry workers. However, how he ran his ministry reflected the early church to me. He didn’t get donations of money; instead, someone from the church would provide food, another would provide free housing for participants, and another family would show up to volunteer and help with on-site needs. This demonstrated to me a fruitfulness in ministry — and yet this person was flagged for concerns because their fund-development bank account was low. Our systems don’t have ways to account for these “gifts in kind”, but also the immense relational support that undergirds the work.

Currently, top leader candidates for Christian nonprofits are evaluated by their ability to raise top dollar. But if we dismantled our lens from purely capitalistic models, perhaps one of the key questions we might ask a top leader candidate is about their prayer life. Actually, I would be curious to ask, “Who prays for you and your ministry regularly, and how does that work?” As a Christian investor, I’m much more confident to invest in organizations where the leader has strong prayer infrastructure. I’m convinced that some of the greatest, most powerful beings in the universe are praying grandmothers. And while most Christian organizations would say prayer is important, it is challenging to build this value into our leadership paradigms and organization planning systems.

“Who prays for you and your ministry regularly, and how does that work?”

Another fundamental flaw to the capitalistic view is the assumption that success is measured by constant growth and accumulation. The capitalistic invitation to constantly increase growth, or “bigger is better”, does not leave room for some of the real work of the Christian faith. In this model, there is the suppression of weakness, the embarrassed turning away from suffering, and the cutting out of the weak. In life with Jesus, we are invited to a full and abundant life, but also a life of transformation, of death to self. It is in weakness that Christ is revealed. In Shusako Endo’s excellent writings, we see and wrestle with the seemingly contradictory truths of the Gospel’s invitation to weakness and strength.*

Success, from the Christian worldview, needs to be reimagined as “faithfulness”. What is God’s invitation to us, to our church, to our organization? And are we faithful to that invitation? Many times, throughout the stories of Jesus and church history, we see evidence of the ways that God has invited someone into something that looks like “failure” only to find that it is the first seeds of revolution. After Jesus’ death on the cross, his followers thought that Jesus had failed to usher in the new kingdom. Paul’s imprisonment seems like a significant barrier to the expansion of his ministry, and yet his letter provided much of our canon.

Throughout the stories of Jesus and church history, we see evidence of the ways that God has invited someone into something that looks like “failure” only to find that it is the first seeds of revolution.

Also fundamental to the capitalistic enterprise is the efficient maximizing of resources toward a mission. As a result, people are commodified into resources that can be evaluated, priced, and maximized for profit. As Christians, we recognize people as “image bearers” of God and members of God’s family, not just “human resources”. Jesus did not see people for their use, but he looked and had compassion. When he saw a woman who was suffering, he stopped and healed her, restoring her socially, spiritually, and emotionally. Arguably, the capitalistic mindset would have said it would be more strategic to help the wealthy leader, Jarius, rather than stop for an unnamed and ostracized woman. Models that reduce people to means for accomplishing God’s work are faulty, flawed, and deeply contrary to the foundations of Christian faith. But economic models that honor the sacred creation of both God’s people and God’s world are worthwhile to examine for helpful insights.

Models that reduce people to means for accomplishing God’s work are faulty, flawed, and deeply contrary to the foundations of Christian faith.

It’s difficult to remember that truth when my surrounding world functions otherwise. The group that I joined at a national Christian nonprofit had a bit of a reputation for chewing up and spitting out people. But my intention as a leader was to create a new culture, to live out the reality that God doesn’t need us to do this work, but it is by God’s good and great kindness that God invites us in. Somehow, I didn’t think Jesus would be terribly impressed if we grew the work by 20 percent, but left half the team wondering if they were worthwhile, cherished children of God. So we carved out time, in the midst of many demands, to have a pause — to talk about what we wanted to be true of other departments’ experience of us and recognize both the great gift of our human bodies, and also to respect the limits of our physical bodies.

Acts 17 reminds us that God, the creator of the whole earth, is not served by human hands. Instead, it is God who is the source of all life and breath and every good thing. We’re invited into real and honest relationship with ourselves and with others around us, and into right relationship with God’s created world. This kind of relationship can also be called love.

Without love, we are wasting our time. And I have yet to find a capitalistic model that knows how to quantify the unmeasurable importance of love, kindness, compassion, and care that Christians are fundamentally called to live out, in every sphere of life. Learn what you can from capitalistic models, but do not take them as an end all, be all. The place where we as Christians are destined to go involves risk and suffering. It is messy and unpredictable. There is loving and heartbreak and hope in what is unseen. And there is great dependence, on the uncontrollable but ever reliable presence of God. 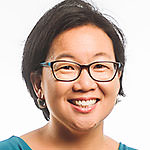 Nikki Toyama-Szeto is the executive director of Evangelicals for Social Action/The Sider Center, where she works with leaders of faith communities to help ignite a passion for biblical justice. Her books include “More than Serving Tea” and “God of Justice”. She writes and speaks from her experiences as a leader at International Justice Mission, the Urbana Conference, and InterVarsity.