Part of 3 of in
by Sarah Lee
ILLUSTRATIONS BY TRISHA KIM INOUYE
Sep 01, 2015 | min read
Part of 35: Speak Up
0 Snaps
0 0 Snaps
Oops! Something went wrong while submitting the form.

In her struggle to discuss immigration issues at her Chinese church, Sarah found strength through storytelling.

I ANXIOUSLY PREPARED the room for an after-service workshop I was leading at my Chinese immigrant church. A group of first to third generation Chinese Americans began to gather inside, bustling with conversation as they grabbed their coffee and cha siu bao. I smiled and welcomed them, but doubted they fully embraced me.

Two years ago, I had chosen to commit to this congregation. But on many occasions, I would go home after service feeling tired or angry about my church’s insularity or silence about current events shaking our nation. A deeper and more consistent feeling was an ache that longed for life in the Chinese church, even if I saw stagnancy. It was a similar ache pointing to my inability to love a community that so largely shaped my childhood.

When I was 5 years old, my family moved from Canada to California. My parents got connected with a Chinese-immigrant church, and the Cantonese congregation became a place of safety and familiarity for my family as we began our new life in the States.

While attending this Chinese multilingual church, I quickly sensed the difference between being a kid in the Cantonese-speaking congregation and one in the English-speaking/American Born Chinese (ABC) congregations. The ABC boys received more compliments and adoration from the Sunday school teachers, while the Cantonese boys seemed to get more time-outs. The ABC girls had the best dresses and spoke with confidence I didn’t see in myself or my Cantonese girl friends.

I soon developed feelings that there was something wrong with being Cantonese. I didn’t think my Cantonese best friend was cool enough, so I would write letters to other ABC girls to be my friends. By the time I turned 10, my birthday party invitations were exclusive to my ABC friends.

I soon developed feelings that there was something wrong with being Cantonese.

As a child, I had already unconsciously learned that it was better to forget that I was Cantonese.

My pastor invited me to lead a workshop series on God’s justice. I said yes, but I felt intimidated with such a broad term as justice — even more so to speak on justice at my Chinese church. I felt immobile for many days in creating a focused curriculum. Models for the overlap between Chinese American Christian communities and God’s justice — especially regarding immigration — were few or unknown to me.

I reflected on the context of my church. We never talked about race, and it was affecting how we formed our relationships. Most members commuted 20-30 minutes into the Latino neighborhood where our church building was located. Chinese families hired Mexican workers to take care of their homes and we led mission trips to Mexico — but our relationships still felt segmented. We treated our neighbors with a lens that was both ahistorical and ignored current issues in immigration that affected all our communities.

We treated our neighbors with a lens that was both ahistorical and ignored current issues in immigration that affected all our communities.

I decided to look at my own personal story. Maybe here I would find what justice uniquely looks like as a Chinese American. As I began to peer within, I was surprised by what I found. Reflecting on justice began to trigger a nostalgic taste. To me, justice began with a memory of the crunch and savory bite into an arepa (Venezuelan flatbread), freshly made by the hands of my mother.

“Gong Gong” (Grandpa) moved to Caracas, Venezuela as the brink of the Cultural Revolution in China and Hong Kong created instability for him to work and provide for his family. He had to leave behind his wife and children for seven years, adjusting to life alone in a new land. He conceded to work for a distant uncle who exploited him and forced Gong Gong to be his servant. Gong Gong painfully recalls that his uncle would make him clean toilets with his bare hands during the worst of times. Yet for the remittances, a roof over his head, and simple arepa flatbreads for food, my Gong Gong continued to work for his uncle.

Over time, Gong Gong brought his family to Caracas, creating a home where my mother was eventually born. She grew up a Chinese Venezolana (Venezuelan), where arepas were as much a staple as wonton noodles. Years later she would pass down stories of herself and Gong Gong through meals for her children.

As I became curious to my family’s migration story, her arepas would become my marker of how memories unlock the necessary empathy and vulnerability to engage in God’s justice.

Her arepas would become my marker of how memories unlock the necessary empathy and vulnerability to engage in God’s justice.

“Today begins a three-week workshop called ‘Migration: Gifts and Calling in Our Ethnic Heritage’. We will start with storytelling.” I introduced the series and an activity that weaved U.S. immigration laws and personal migration stories.

“Recall a time when significant movement marked your family’s history.”

On the whiteboard I provided two examples of my own:

1994: My Family Moves from Canada to California

I gave space for my multigenerational congregation to reflect. And in the minutes of looking back and discussing with their partners, the attendees began to remember.

“My mom was detained in Angel Island at the age of 9 for three months.” (Auntie Esther, age 47)

“My father came to the U.S. by himself in the 70s as an international student. He had a lot of trouble adjusting because of the language.” (Matt, age 23)

“I’m not sure of the exact dates, but my grandpa came to Chinatown as a paper son. I guess in today’s terms, he was undocumented.” (Pastor John, age 40)

As people shared, we began to draw out themes of our migrant experiences such as forced assimilation, detention, and self-hatred through exclusion. We saw parallels in our family stories of migrants forced into unfair labor and breaking laws because it was better than letting their families suffer. In the sacred act of remembering, we faced our shame and became vulnerable.

In the sacred act of remembering, we faced our shame and became vulnerable.

“I never realized how much of myself I lost growing up in America.” (Uncle Henry, age 59)

“The moments pass quickly, but when my mom speaks about choosing to stay in China during the Cultural Revolution, I catch the pain in her voice.” (Justine, age 27)

As I listened, God also showed me how he could resurrect what I had lost as a child in the Chinese church. Here, we were literally re-membering our broken memories together. My prayer continues for more arepa moments, where the faithful Chinese American people tell their stories as a path toward healing and solidarity with other migrant communities.

Here, we were literally re-membering our broken memories together. 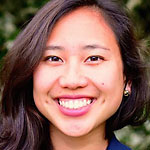 Sarah Lee is a daughter and granddaughter of Chinese migrants, working at the intersection of multi-faith organizing and immigrant justice in the Bay Area.