In some Asian countries, it was common practice for relatives to adopt children from one another. That didn't happen here, but its near brush left an inevitable scar.

Runa’s story begins with the number 7. She is the seventh daughter out of seven daughters in her family. A few years later, her younger brother is born, and then a stepbrother joins the fold.

As daughter No. 7 in a Taiwanese family, upon her birth, Runa immediately found herself in a default story. Another girl. Disappointing. Too many children. No one said it out loud, but relatives sighed and shook their heads.

Another girl. Disappointing. Too many children.

As she pieced together how to navigate her days, Runa carried that number with her. She was a terrific crybaby as a child, always wailing to be included. That softened into a shyness as she grew up; school was a lonely place, and she didn’t want to join any school clubs. As a teenager, she slipped into being the quiet one of the family; it was difficult to talk over or in-between the three talkative sisters anyway.

Then, over a family dinner one day, Grandmother mentions something Runa’s never heard before: Runa was once almost given away.

Almost? You considered it? What changed your mind? These are all the questions Runa never asks, because she doesn’t want to make Grandmother sad. But the familiar number 7 in her heart takes on a sharper definition. Not only was she an unwanted daughter, there was a clear moment when she was unwanted. “No,” Runa is quick to say, “it wasn’t mean spirited.”

When Runa was born, there wasn’t enough milk to feed her and the two twin girls who arrived 10 months before. Her father’s business in manufacturing water heater units was going south and her mother had to work as well, cooking for all the employees.

Back then in Taiwan, it was very common for people to adopt children from relatives. Informal and communally accepted, being “given” to another family was openly shared information, and original family members often stayed in touch. Runa’s own mother is the adopted daughter of her grandmother’s cousin. So when her grandfather met a woman in a bus station who wanted a child, arrangements were made to meet with the new family.

Informal and communally accepted, being “given” to another family was openly shared information, and original family members often stayed in touch.

How much better would Runa’s life be as the apple of someone else’s eye rather than added weight to an already laden basket? It was practical — a win-win situation where everyone’s burden is made lighter. This was a different kind of love. A “did you eat?” kind of love.

Since that dinner, Runa has haphazardly collected bits and pieces of the full account along the way. At her grandmother’s memorial service, she thanked her grandmother for taking her back, but finds out instead that it was her father who voiced dissent. The new family had wanted to cut off all connection after the adoption, but that made her relatives uncomfortable. With six girls, what’s one more? She later discovered some of her siblings already knew the story but never thought much of it. She only recently learned that her eldest sister raced home that day only to burst into tears, so happy to find her baby sister still at home, forever her mei-mei.

In many ways, Runa’s story is the dream of many an adoptee: What would it have been like if I hadn’t been given up for adoption? These piecemeal details and her family’s general disinterest in this moment of her life speaks to just how much she belongs to them. In one light, there’s no story to tell because nothing had happened. But as the object of this non-event that is uniquely hers — never physically handed over but only as an entertained thought — she is now someone who does not take belonging for granted.

But as the object of this non-event that is uniquely hers. she is now someone who does not take belonging for granted.

“Belonging means having people who expect and want to see you in a gathering,” Runa says. “My family got larger and larger with in-laws, but my grandmother always made sure we all showed up at the party. And I’d go to the party and say ‘hi’ and you’re there and you just go to your corner and make sure you say ‘bye’ and ‘goodnight’. But that’s belonging! It’s not a surprise when you show up, but it’s a concern when you don’t.”

"But that’s belonging! It’s not a surprise when you show up, but it’s a concern when you don’t.”

Runa may not be the life of the party, or have much in common with her older relatives, but the picture is incomplete without her. She shows up because a place at the table had been prepared for her, accepting her as she is. Even in her relationship with God, she identifies less with the language of being an “adopted daughter” of God, but more that we are all originally a part of God’s family. Made in his image, our true selves are being restored, and finding God is more akin to simply going home.

Still, Runa herself cannot say if she is the way she is as an adult because of who she innately is or because of this revealed moment. As I ask her more questions, I sense a growing yet familiar discomfort in myself and in Runa as she tries to answer: Family harmony should be left alone; it is easier to forget than to resurrect the past.

But whether she likes it or not, a passing comment has become a part of her story. Her whole life is centered on giving belonging to others because she knows what it feels like to question it, whether or not she can articulate her own pain in this story. Her reputation for hospitality precedes her in church and with family; she’s known as quite the host and all the family parties are now held in her home. She became a teacher, to create a space of belonging for younger children. It was only until Runa married her husband Sean that she found herself healing in a committed relationship where she rarely questions her place.

Her journey loudly speaks to the mysterious power of stories — what is said and unsaid, remembered or forgotten, possible ones overlaid on top of lived ones — to form a person.

Number 7 may be a heavy number, but it is hers, now carrying with it new associations. 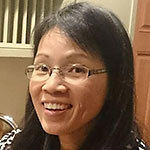 Runa Lin is a public school teacher. She is a mother of two children. She is currently attending Logos Seminary School part-time working toward a master's degree in Christian Studies. Both her and her husband are elders in Evangelical Formosan Church of Los Angeles.