Part of 3 of in
by Joyce Chang with Sung and Wai Tse
PHOTOGRAPHY BY JON PARK
Aug 01, 2015 | min read
Part of 34: Have You Eaten?
0 Snaps
0 0 Snaps
Oops! Something went wrong while submitting the form.

Sharing food for them was not just an expression of love, but also about sharing culture and connecting with community.

SUNG AND WAI always share their food, even without utensils. In a restaurant, they get more variety this way. Even with Costco pizza, you can find them alternating bites.

“It’s really nice when you’re enjoying a meal together, and you have the undivided attention of your spouse,” said Wai. “You’re just there together. There are no distractions. You’re there enjoying something and you really bond.”

And yet, there was a time when Sung and Wai didn’t share everything, and had to overcome different cultural backgrounds and eating habits. Wai came from a Cantonese family who ingrained in him the importance of finishing everything on his plate — always. Sung grew up in a Korean household that emphasized the virtue of eating just enough.

How did two people with such different histories come to share meals so harmoniously and build a life-giving marriage together? In many ways, it was thanks to food.

“Finishing my food is one of the worst habits my parents could have ever passed on to me,” Wai chortled.

“Now as an adult, I have no self-control. When my kids were small, they couldn’t finish their food and I was there to readily help them. Sung has been helping me fix this bad habit.”

Growing up, Wai’s dad was hardly ever home. He worked hard as a cook at a Chinese restaurant, and so his hours would stretch late into the night, often doubling on weekends. Wai’s mom would come home from the garment factory after laboring all day as a piece worker and cook dinner for the family. Food preparation was a chore, part of the grind day in and day out.

Food preparation was a chore, part of the grind day in and day out.

Wai describes their meals at home as typical Chinese food: lots of chicken, rice, veggies, and tofu. They also enjoyed Chinese delicacies such as chicken feet, salted fried fish, and beef tripe, food he now deems as “things I shouldn’t be eating anyway” for health reasons.

As the youngest of five children, Wai remembers shoveling meals down as a family. “Eating food quickly is part of being Cantonese. I think I passed this down to my son. Even so, there was no competition, but if you sat next to my mom, you got some choice pieces of food.”

“My father went through the Korean War and grew up starving and very poor,” Sung recalled. She remembers her father telling them how rare and expensive white rice was at the time. Everyone ate predominantly brown rice, with a little bit of white rice mixed in. In today’s health fad culture, the move to eat brown rice makes him laugh.

“When we immigrated and came to the U.S., he never forced us to finish anything. His viewpoint was, for you to eat so much that you’re stuffed, it’s not healthy.”

This unique perspective may have come from seeing the effects of malnutrition during the Korean War. Sung’s father witnessed starving people suddenly eat a lot and then get very sick, even dying.

Sung’s father witnessed starving people suddenly eat a lot and then get very sick, even dying.

This became a culture shock for Sung when she went over to friends’ houses where finishing everything was the mantra of the household. She describes it as having been a struggle to eat past full in order to be polite. Eating meals with other Asian parents had to be strategic. You had to be careful not to get a lot of food, but not too little as to seem unappreciative. But even this plan could easily be thwarted — Asian parents urged her to eat a lot and would heap additional servings once the plate was finished.

Sung’s mother worked full time, and while she was a good cook, when she came home to prepare food after a full day, it was a chore as well. Sung saw the way her mom made food as an expression of love.

DATING AND EATING, EATING AND DATING

Sung and Wai are high school sweethearts. They began dating when they were 17 in their last year. Wai was a burly football player just shy of 6 feet while Sung was petite, standing at 5’3”.

Sung remembered, “We ate lunch together at school. He ate so much. I was used to eating just a peanut butter and jelly sandwich and an apple for lunch. But he ate everything on the menu. Chimichangas. Pizza. Our tray was ridiculous. Eating with him, I gained weight.”

While dating, Wai began introducing Sung to new types of food. It was a way of discovering more about each other and their cultures.

Sung said, “My dad didn’t like any other foods besides Korean food. I didn’t try other types of food until school lunches. When Wai introduced me to foods like pho, it was like a whole new world was opened to me. I hated dim sum at the beginning. Koreans have to eat rice. Rice is like the main dish. Everything else is side dishes. But in dim sum, they don’t have rice! It was weird to get used to.”

Wai added, “She would order rice. And I would tell her, ‘That’s not how you eat dim sum!’”

Sung and Wai’s courtship is unique in what Sung would describe to be “doing everything backwards”. They dated for three years, started working first, got married at 20, and then went to college later. Kids came even later at 31.

Somewhere in this process, they found church again. Their shared love of eating and discovering new foods then became a tool for building community.

Their shared love of eating and discovering new foods then became a tool for building community.

In their first year of marriage, Sung’s co-worker encouraged her to go to church with her. Sung and Wai were both open to it, and began attending an African American church in South Central Los Angeles for a number of years. They were the only Asian couple there. Sharing meals was once again a way to share culture and grow in unity.

“I don’t know about Wai,” said Sung, “but when we attended the African American church, I was a bit taken aback by the choices of food. It was a lot of fatty foods I had never eaten before. I had my first hot link!”

“When we barbecued, it was outstanding,” Wai remembered. “It was awesome eating together because, despite our cultural differences, we all have God in common. Saying prayers before meals and encouraging one another during and after our meals was the best part.”

Sung and Wai have now been at a Taiwanese immigrant church for the past 18 years and enjoy the community there deeply. They bond with other families, watching their kids grow up together and eating Chinese food at potlucks with their small group.

As a family, Sung and Wai have passed down their love of eating to their kids. No matter how busy they are, they always sit down together as a family for dinner, and hold hands to say grace.

No matter how busy they are, they always sit down together as a family for dinner, and hold hands to say grace.

Sung shares, “This is an important tradition we practice, to eat together as a family and thank God for providing the food and for our health every day.” 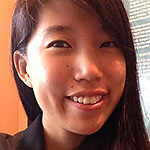 Joyce Chang is a follower of Jesus and a celebrator of life. She studied Comparative Literature and Education at UC Berkeley and has a passion for telling stories and coffee shops. 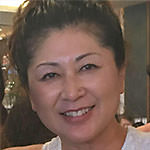 Sung Tse immigrated to the U.S. when she was 7 and has lived in Southern California since. She married her high school sweetheart, identifies as Korean American, and is a mother to two boys. She is a graduate of the University of California, Los Angeles and currently works as an Information Architect for research in oncology. 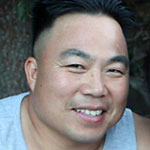 Wai Tse immigrated to the U.S. from Hong Kong at the age of 9 months along with his parents, grandmother, and four older siblings. He and Sung are high school sweethearts and have been married for almost 29 years. He currently works for Sprint as a  eld technician and has recently taken up cycling — he will need a second job to support this healthy, but expensive hobby (per his wife). 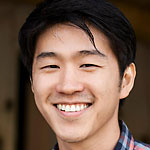 Jon Park is a Korean American born and raised in Southern California. He currently resides in Chino Hills, CA and enjoys photography as a hobby.