“The indignity of being Asian in this country has been underreported,”(1) claims Cathy Park Hong, in her essay “The End of White Innocence” from her most recent book "Minor Feelings".

Hate incidents in the U.S. are often only reported in the way white Americans can consume and digest racial trauma: as a spectacle. In her book, Hong argues that the media’s reporting on hate crimes, especially after Trump’s election, is framed by “obvious heretical displays of hate: the white high school students parading down the hallways wearing Confederate flag capes and the graffitied swastikas”.(2) Similarly, the media gives attention to and constructs recent anti-Asian racism as spectacles that are consumable and therefore profitable. For example, “Asian woman attacked with acid” and “irate subway passenger sprays Asian man with Febreeze” are obvious displays of hate that will also get clicks.

What is much harder (or less appealing) to report is the ongoing, cumulative grief and trauma of exclusion, othering, and diaspora that come with being Asian in America. Hong defines this as “minor feelings”, while David Eng, Shinhee Han, and Anne Anlin Cheng have named this phenomenon as “racial melancholia”. As Eng and Han outline, minor feelings and racial melancholia (I use the two interchangeably) describe the social violence and psychic pain afflicted on Asian American communities by white supremacist systems and a culture of colorblindness. While the media reports on and profits from interpersonal racist incidents that result from exogenous shocks, minor feelings and racial melancholia encompass the daily, interminable despondence of racism.

Minor feelings capture the losses of the diaspora: our divorce from home, family, language, property, customs, culture, and spirituality.

Minor feelings describe the confusion, regret, and despair from our positionality as a wedge between white supremacy and Blackness. From indentured Asian labor to the model minority myth, Asian labor is continually cemented as a buffer between the enslaved Black and the white master. This renders us as “racially nowhere”(3) objects, manipulated into the false dichotomy of survival or solidarity.

Minor feelings embody the cognitive dissonance of being told you’re successful, while you suffer from mental illness, institutional barriers, and feelings of failure.

Minor feelings result from being gaslit by the assumption of colorblindness, which robs us of language to be able to name the ways we’ve been assimilated into, while excluded from, social and political life in the U.S.

Minor feelings are the internalized invisibility that makes us swallow the bitterness of racialized and dehumanizing incidents until they mutate into self-hatred. We don’t speak up because it “wasn’t that bad”, or because our experiences “aren’t as serious as it is for others”. While perspective is important because the severities of racism manifest differently for different groups, Hong reminds us that racial trauma is not a competitive sport. Our silence doesn’t serve anything except white supremacy.

Minor feelings are not necessarily the racial incident itself, but the stress of its anticipation, which is invisible, cumulative, and terrorizing.

Minor feelings are interminable. Racial melancholia is mourning without end or catharsis.

Mainstream media seems to only engage with race and racism when it can be commodified as trauma porn. This is especially apparent when considering the way the media covers Black death: in excessively graphic detail and imagery.(4) While media coverage and honest journalism on racism is imperative, this explicit approach to coverage is costly and doesn’t always lead to justice. In a qualitative study on the impacts of seeing viral Black death online, Black women exhibited trauma responses and negative emotional and physical reactions after exposure to viral Black death.(5) If the mainstream conversation and coverage on racism is not healing its symptoms, but further traumatizing its victims, isn’t it time for a new way to dialogue?

Perhaps minor feelings and racial melancholia can be utilized to nuance the ways we understand and talk about racial trauma. Our current conversation lacks the framework to engage the ongoing drum of fear, anxiety, and dysphoria that communities of color experience on a daily basis living in Amerikkka.(6) Anti-Black racism is expressed in a myriad of insidious and terrible ways, beyond the desensitized overexposure of violent Black death we see in the media. Anti-Asian hate goes before and beyond the interpersonal attacks publicized during the COVID-19 pandemic. Racial melancholia gives language for us to engage in the ongoing, complex reality of racism that hopefully leads to deeper self-understanding and more urgent interventions. From incidents of microaggressions to an accumulation of psychic and social pain, minor feelings are worth naming, mitigating, and healing.

(6) A common satiric usage of the letters KKK in the spelling of America as Amerikkka, alluding to an underlying or inherent racism in American society. First appeared in: 1970 July, “White Ethics and Black Power: The Emergence of the West Side Organization”, in Black World/Negro Digest, volume 19, number 9, page 83. 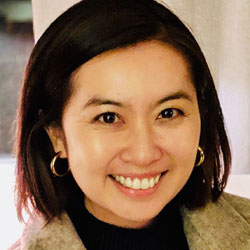 Bianca Mabute-Louie (she/her/hers) is an educator, writer, and community organizer passionate about uplifting the stories and leadership of youth, womxn, and other marginalized communities. She has researched, written, and spoken extensively on the experiences of queer Asian American Christian millennials. Bianca is also an ethnic studies teacher and youth organizer, working specifically with Asian Pacific Islander youth to end domestic violence and gender-based violence. Bianca is based in the Bay Area and eventually plans to get her doctorate and publish her research. You can find her on Twitter at @beyonkz.