Part of 2 of in
by Kaili Sandico
ILLUSTRATIONS BY TRISHA KIM INOUYE
Dec 01, 2016 | min read
Part of 50: Homeland
118 Snaps
118 0 Snaps
Oops! Something went wrong while submitting the form.

IN SEVENTH GRADE, I attended a camp where the speaker compared life to pie. Apple pie, to be exact. His point was that God shouldn't be a slice of pie, but rather, God should be the filling of the pie, present in all of life. At 13, the pie analogy hit the spot as I imagined a warm slice, served a la mode, ready to be devoured.

Now I imagine my 21 years of life sitting on a plate waiting to be picked apart and devoured, the same excitement is not quite there anymore. The anticipation is gone. My life is not pie.

Church, home, school, soccer, and friends are parts of my life that are easy to recognize as mostly separate. Sure, there's overlap here and there. I noticed that church and family are almost exclusively Asian American, while all other aspects of life are mostly comprised of white people.

Even when considering my ethnic identity, my Filipino half and Japanese half were technically one piece of pie, but I never really knew if I liked the flavor that this combination made. It's an interesting combination to say the least. Many people would look and label me as "Asian", and for the majority of my life, I accepted that identity.

One thing I've been discovering recently is the impact of my ethnic identity. Unpacking the fact that I am a mixed Asian brings forth complexities in my identity that my monoracial Asian friends can't always relate to. The cultural differences between Asian ethnicities are interesting to look into, especially being Filipino and Japanese.

Unpacking the fact that I am a mixed Asian brings forth complexities in my identity that my monoracial Asian friends can't always relate to.

My Japanese side brings in historical pain from the Japanese American internment camps, and other cultural ideals, like keeping family issues strictly within the family and always having to pretend like you've got your life together. My Filipino side introduces a history of pain as the result of poverty, alcohol and drug abuse, and broken family relations.

My Japanese mother offered a solid evangelical Christian community, whereas Filipinos are culturally Catholic. As a result, my Filipino dad holds Christianity in a different kind of light than my mom.

Until college, my faith was always tied to my Japanese identity, because I attended a Japanese American church. While I do appreciate all that my church offered me — community, biblical teachings, and a safe place to embrace being Japanese — there were also topics that my church did not address that were very harmful to my understanding of who God made me to be ethnically.

My Japanese American church did not affirm my Filipino identity. Quite honestly, I didn't know that it needed to be affirmed. But subliminally, I was being told that my Japanese half was superior to my Filipino half because it was tied to my faith, and because it had less cultural problems, such as alcoholism.

But subliminally, I was being told that my Japanese half was superior to my Filipino half because it was tied to my faith, and because it had less cultural problems.

In reality, my Japanese culture has its own list of problems, more than it was willing to admit.

I entered college knowing that I wanted to join a campus ministry. I knew of a couple of Asian American ministries, but I wanted to try a multiethnic ministry because I felt that my view of church was limited to being exclusively Asian American, and I wanted to push myself out of my comfort zone.

Unfortunately, my fear got the best of me and I joined Asian American InterVarsity (AAIV); it felt safe and comfortable. Despite my disappointment, God is still good and used my fear-driven decision to push me out of my comfort zone in ways I didn't know I needed to be pushed.

While AAIV did echo many aspects of the Japanese American church that I grew up in, AAIV also presented a very unique intentional space, where the question was asked, "What does it mean to be Asian American?" While attending to this question, I noticed that even though everyone there was Asian American, I couldn't relate in many ways.

I felt much more removed from my Japanese and Filipino cultures than they were from their Chinese or Korean cultures. I didn't speak Japanese or Tagalog, and honestly, for the first time in my life, I felt that I wasn't Asian enough.

This was such a bizarre feeling for me to have because I grew up in a heavily white neighborhood my whole life, and always felt that my Asian-ness was a tad bit too much. I was confused. Why was I so uncomfortable in a community that I felt so comfortable with in the past? To everyone else I was just another Asian American, but I was Japanese and Filipino, which caused a lot more cultural dissonance than others realized — than even I realized.

I began to grow bitter toward the community that I thought I loved, because I felt so misunderstood and overlooked. Sure, I was accepted, but not understood. I expected others to understand me, but I didn't really understand myself. It just seemed easier to point my finger at others.

I began to grow bitter toward the community that I thought I loved, because I felt so misunderstood and overlooked.

I stuck with AAIV because I didn't know where else to go. I began to resent the Asian American church even more than I had before and my heart grew bitter. Not only did they exist in what I saw as an exclusive and narrow-minded community, but they also overlooked those in their own community.

It wasn't until I began to unpack my ethnic identity that I began to feel uncomfortable in what initially began as a place of familiarity. In reality, my newfound resentment was being directed toward the identity I was discovering for myself.

At a regional conference for IV, there were conversational spaces for specific racial and ethnic identities. There was a Southeast Asian group as well as an East Asian group, which were the two that I could identify with. But I ended up choosing the biracial group because I was curious to see how my mixed ethnic identity would relate to the stories of other biracial Christians.

I found that we had more in common than I anticipated; we all felt a mutual disconnect toward both halves of ourselves. We were never quite enough of anything to truly belong, but this lack of belonging is what connected us most deeply to one another and to God.

By the end of the retreat, we became a family of misfits who realized that our lack of identity in any particular group on this earth rooted us deeply in our identity in Christ. We had nothing else to cling to. This was a burden that many of us had been bearing in solitude, which we were now able to see as a blessing within this community.

We became a family of misfits who realized that our lack of identity in any particular group on this earth rooted us deeply in our identity in Christ.

Finding that place of community put a fork in my hand. I felt ready to take a look at my life and digest the "ethnic identity" slice of this pie I was given. I was ready to discover my family's past so that I could look toward the future, and most importantly, I was ready to discover where God sat in the midst of this. This was a terrifying process, but IV gave me space to begin to reconcile my ethnic identity with my identity as a child of God.

I'm in my fourth and last year of undergraduate education and an atrium of butterflies lives in my stomach — excitement, anticipation, expectation, and a lot of fear — and all of this is emerging as I try to predict where in the world I might be one year from now.

I used to think that if I truly loved God, then I could maintain a stable relationship with Him without the help of others. But God has used experiences like that IV conference to enlighten me about the importance of community. God has used others so faithfully to continuously tell me that He sees me and He knows my soul well. I can't expect to find people exactly like me wherever I go; I have grown so much by being a minority among minorities.

I desire a community that is willing to listen and sit with me as I unpack both the victories and hurts of my mixed ethnic identity. 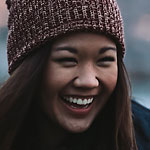 Kaili Sandico was born and raised in Seattle, Washington and is attending the University of Washington studying Early Childhood Family studies with a minor in Diversity. She intends on becoming an elementary teacher and is particularly interested in urban education. In her free time she loves to play soccer and hike around the beautiful Pacific Northwest.