Part of the challenge of having ancestors from such a heavily colonized place like the Philippines is that stories get lost over time. In fact, formal surnames were not used, or at least documented by historians, in the same capacity that they are used today.(1) Pre-colonial ancestral traditions and practices have been lost because of years of war declared upon the archipelago.

I want to know more.
There has to be more.

The Philippines, pre-colonization, was an archipelago made up of many cultural identities, with ways of life already in place. But with the Spanish came an attempt to homogenize the culture into being “Filipino.” A Lolong Time Ago: A Prehistory of the Philippines notes, “the term ‘Filipino’ didn’t exist until we were colonized and our islands were considered one political entity.”(2) This narrative of the colonizer bringing their interpretation of civilization is not new or unique to the Philippines. In this instance, the intricate systems and cultures were disrupted and forced under one politicized umbrella. The identifier became unity of politics over unity of land.(3)

The story of a name is political.

Many of the surnames Filipinos have now were brought to the Philippines by the Spanish in a book called Catálogo Alfabético de Apellidos, which translates to: Alphabetical Catalogue of Surnames. Spanish colonizers applied this lengthy book to document family units. Seeing my own last name in the book elicited mixed feelings. On one hand, it allowed me to trace my ancestry somewhere. But it also became the tangible reminder of Spanish rule over the Philippines. In some regions, previously established surnames were used, but others were forced to adopt surnames that marked them under Spanish rule. Because not everyone followed the Spanish decree or went around the rules, it should be noted that this became one of the many ways that Filipinos struggle with documenting their ancestry.(4)

Whether we like to think of it or not, our names are marks of colonization that we carry with us. Aspiras is a surname recognized by Filipinos. It is recognized by Filipino immigrants for being from the region of La Union, which is where my grandpa is from. Filipinos recognize the relationship of the name to the location. In this case, the Filipino diaspora recognizes the distinction of Spanish influence on their names, while others assume its Spanish origin must mean my ancestry is directly from Spain. They also assume that it is their business to assume my ancestry.

The story of a name is political.

The ambiguity of my identity to outsiders looking in always has them confused. From not knowing where the Philippines is to making a variety of other assumptions about my identity, the years of rejection both within the Asian American community and without have left me wondering where I really am meant to “fit.” I have gotten to a point where I don’t want to fit in just one box. I’ve grown to love the cultural mix that has become who I am. Born to a Filipino father and white mother, raised by the love of my surrounding community, and embraced by my Latinx peers when the Asian American community said I was “not enough” or “not the right kind of Asian.” Instead of forcing myself to fit in spaces that do not want me, I have embraced the complexity of my identity. This meant learning to love my name. It meant learning that years of survival and resistance live in those seven letters.

Ilocano means “people of the bay.” My ancestors, whether we share a surname or not, gave thanks to the sea that surround them because it gave them life. While the earth wields many unknowns and immense power, it continues to sustain us. It is the “people of the bay” who live within me.

I have always had this unshakeable feeling that I am somehow connected to the ocean. It is a deeply rooted, almost spiritual feeling that there is some bigger tie between myself and the waves. I emphasize giving thanks to the land and the sea to honor the gift that is this earth. I so desperately long for home to be a place, but like my last name, I feel misplaced, not knowing where I am meant to be until I return to the ocean. In that moment, though, I am reminded that I am home. Because the story of my name comes from the people of the bay. While I may not know every tradition of my ancestors before the Spanish came, I do know that they had a relationship with the waves, with the shores, with the land in a way that illustrates and provides an outlet for me to continue to understand the complexity and fluidity of my identity.

Being interracial is an in-betweenness in of itself, but being of Ilocano ancestors is to be in-between as well. The misplaced and displaced histories of our people. The undocumented, erased, and omitted histories are lost at the hands of the colonization, occupation, and imperialism of the archipelago. Unearthing my roots has not been easy. It has been a process of acknowledging the horrors of colonization and imperialism. A process of searching for explanation of generational trauma and mystical connection I feel within me but do not know how to explain. A process that has begun with a long list of books on my “to read” list. So much of this is buried under years of just not knowing.

While Aspiras did not change with immigration to the United States, the way it is pronounced has changed. I listen to my grandparents pronounce it with their slight Filipino accent, and try to pick up on their pronunciation, so I can share it with others. But without fail, my attempts are frequently squelched by people who don’t care to put the effort into pronunciation. Shaping the pronunciation of my name has been much like shaping the image of my community. In owning all the complications, I extend past the binary understanding of who I am supposed to be and simply show up in this world. To work against the binary image and neat lines of race, culture, and ethnicity is to fight colonial mindsets and imperialist tendencies. If we are to shape a future that understands all facets of identity as fluid and flowing, we must blur the lines that many fear to see blurred.

I have become a way-finder of my identity.

Building canoes filled with people that I know will get me through the storm. At the end of the day, relearning how to pronounce my last name for how I see myself has been critical. Letting it roll off my tongue in a way that emphasizes the beauty in owning and in appreciating who I am. I am learning that correcting people when they mispronounce my name is the deepest act of self-love that I could provide myself with. That I find comfort and peace in those who pronounce my name wrapped in love. I am forever grateful to the communities that took me in and handled me with care. I am because they are. I will fight for them, for their names, as I fight for myself. We claim who we are in our names. We allow our names to help us find the way. 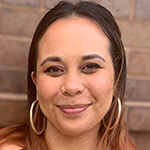 Jordan Aspiras (she/her) is a a twenty-something, interracial, woman of color. Currently in her third year of her Master of Divinity, Jordan plans to graduate in the Spring of 2022, with the hope to continue on the Chaplaincy path. Find her on Instagram: @sunshinewomann.