Not Sure If I Can Handle God’s Sovereignty

Part of 7 of in
By Martin Yan
Illustrations By Bryan Sang Park
Feb 01, 2016 | min read
Part of 40: Over the Hill
0 Snaps
0 0 Snaps
Oops! Something went wrong while submitting the form.

Justin may never “grow up”. And that means quite a different picture of the kingdom of heaven than what Martin would prefer.

Justin was born out of wedlock to my cousin when she was 19. He was the mistake, the thing that she was trying to hide for several months before her parents found out. He was the accidental life born from two teenagers who had no reason to be together, much less stay together.

He was the mistake ... the accidental life born from two teenagers.

Justin was treated like a hot potato. His mom wasn't ready to care for him, and Dad was pretty much out of the picture. Justin would mostly follow my aunt and uncle around. Since they had a mahjong tradition with my parents, they would often come over on weekends and string him along for the ride. He would be dropped off in my room, essentially passed like a chore over to me.

In the beginning, I didn't know what to do with him. I was a 13-year-old boy, and I didn't want to stay home and babysit. I wanted to do what normal kids my age did: go out and play with friends, watch movies, race down the street, and toilet-paper houses. You know, stupid things that don't make sense but make you chuckle when you think back on them.

But I couldn't leave Justin alone in my room. Not that my aunt and uncle would have cared, they were too busy with sik woo to have noticed. And some days, I actually did go out. But deep inside, I felt compassion for him. Justin didn't sign up for any of this. Justin doesn't even like being here. Everybody around him had been making choices for him — choices that led to him sitting in my room, staring at an old, black, Panasonic TV screen.

He didn't ask to be brought into a world in which all he would know was pain, loneliness, and neglect. He didn't ask to spend entire days cycling through pointless TV shows. Would I just be a witness and not do anything? I had to reach out.

He didn’t ask to be brought into a world in which all he would know was pain, loneliness, and neglect.

It was a slow build, but over time I grew to care for him like a little brother. I decided to spend more of my Saturdays at home to be with him. Sometimes, my friends even joined us. We watched a ton of SpongeBob, and built random castles and cars out of LEGOs. Chuck E. Cheese's eventually entered the picture. I would think of places to take him and activities we could do together, even if I didn't have much money or resources at the time. Much of my free time was devoted to looking after him and making sure he was all right.

But by the time Justin was 3 or 4, we knew something was wrong. He wasn't growing as big as the other kids and was late with major milestones, like walking and talking. He wasn't as responsive or sharp as other kids his age, and we determined that he had some sort of autism or intellectual disability. He has never been officially diagnosed — his disability is not discussed much in our family. Whatever it was, it kept him from functioning like an average kid.

This was very trying for our relationship. For the next five years or so, communicating was difficult. Whenever he'd try to speak, it just didn't make sense. I'd ask him basic questions like, "Are you hungry?" or "What car would you like to build?" and he would always respond with gibberish. When it came to using simple math, like basic addition, he would come up with random numbers. This made playing Monopoly a very frustrating experience.

Some time during college, I realized that this was something Justin would never grow out of. This realization didn't come with a bang, it was just a shrugged finality — this was it. He will never become "self-sufficient", at least in the way our society defines it. Most of us grow out of our childhood and into adulthood with responsibilities, schedules, relationships, and bills. But not for Justin. In some sense, he will always stay 8.

In many ways, Justin is more carefree and happier than I am. Sometimes I look at him and wonder if he is ever afraid of anything. Every moment, he is in the moment. He has his video games, enough food for every meal, and people to take him to school every day. Worry isn't in his vocabulary because he has always been provided for.

Sometimes I look at him and wonder if he is ever afraid of anything.

This is what Jesus is calling me to be: a child without worry or insecurity. "Truly I tell you, unless you change and become like little children, you will never enter the kingdom of heaven" (Matthew 18:3 NIV). He calls me to appreciate every good gift that I am given. He tells me to trust Him with my finances, my dysfunctional relationships, and tenuous job prospects. He encourages me to stand firm in what He has done and will do in my life, and to let go of the constant pressure to prove my worth to Him.

It's very easy to subscribe to today's culture of achievement — the idea that the greatest thing about you is what you are able to do in the world. Perhaps our greatest mistake isn't that we've achieved too much, but that we've lost focus on the best thing about us — the miracle that we can call ourselves children of a King Who calls  himself our Father.

Perhaps our greatest mistake isn’t that we’ve achieved too much, but that we’ve lost focus on the best thing about us.

I've come to a deeper understanding of God's heart for His children through the years I've spent with Justin. I've developed a greater compassion for those around me who are less fortunate, forgotten, or marginalized. I've learned that God wants me to be dependent on Him for everything because He will always provide, just like He does with Justin.

But there are still days when I don't know God's goodness. And I wrestle with difficult questions: If God ever asked me to switch places with Justin to gain spiritual childlikeness, would I do it? Would I trade in all of my wisdom and compassion if God healed Justin and made him healthy? I'm not sure that I would.

If God ever asked me to switch places with Justin to gain spiritual childlikeness, would I do it?

Because as much as I say I want to be close to God, I don't like being needy. I want to be taken care of and still be in control of things. This is why submission is such a powerful act — it's a battle of the will. Am I willing to give up my independence, which I consider to be my right? Or will I surrender to God only when there are no options left? Children, especially those who are disabled, aren't given options, because they don't know how to choose well and must be led by someone who is trusted. Yet I value my options because I think I'm able to choose well, though my choices that are often bred from self-sufficiency lead me further away from God and away from true freedom.

I wish I could tell you that I'm good with it all, that God and I shook hands and came to a convenient understanding. I know all the neat answers. Romans 8. Psalm 139. Don't get me wrong — I do believe God made Justin wonderfully, that He has a special purpose for him, and I'm incredibly glad to have him in my life. These beliefs don't make life any easier for Justin, though.

Yet this is the reality that we are called to engage in. We're living in the tension of hope and discontentment, of seeing yet not fully perceiving. I want Justin to comfortably fit into a certain standard of being in this world, but he never will. One day, I believe I will fully appreciate him in the ways I could not see, as someone who fits into God's family exactly as he already is.

Justin is 18 now, and we live very different lives. But there is a part of me that will always be shaped by him and I hope it doesn't stop. 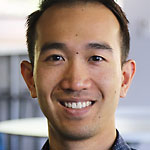 Martin Yan is employed as a marketing professional in the tech space and enjoys crafting good stories with his free time. He is drawn to stories of redemption and finding God in unexpected places. He has published a children’s book and short story, and is currently working on a second children’s book.