Zoombombing, distance learning, hybrid schedules: before 2020, these words would have held little meaning for us as teachers. Today, as we are fumbling through the 2020 Fall Semester and as K-12 school districts nationwide rush to make decisions about whether to resume in-person instruction or not, these phrases evoke trepidation because we understand that our collective well-being depends upon the decisions of those in power, be that district officials, school boards, or government officials. The arguments to “re-open” schools and revert to a pre-pandemic world reveal preexisting racist and classist disparities that have only grown starker with distance learning.

We are history teachers and graduates of UCLA Teacher Education Program’s Ethnic Studies Cohort. Xitlaly identifies as a native of Santa Ana, Calif., and a Xicana (Rios 2008), a term that was birthed at the turn of the 21st century to highlight the multiplicities of identities such as race, class, and gender of Chicanxs. Eunice spent her adolescent years in Irvine, which neighbors Santa Ana; she identifies as second-generation Taiwanese American and uses the term Asian American as an indicator of political and racial solidarity. Currently, we are based in Orange County serving Anaheim and Santa Ana, both of which are predominantly working-class, Latinx communities that have been disproportionately affected by COVID-19 compared to neighboring cities in the county.

We understand that COVID-19 racial disparities are not accidental. The misguided, color-blind and ahistorical rhetoric of “reopening schools” by government officials treats students, teachers, and all our families — especially BIPOC students and teachers — as disposable. This disposability is a direct consequence of neoliberalism, which is an economic theory that “purports that human well-being can best be achieved by … strong private property rights, free markets, and free trade” (Johnson 2016). As author Arundhati Roy poignantly wrote, this pandemic is a portal: “a gateway between one world and the next.” In order to remake our neoliberal, capitalistic, racist, and dehumanizing world, we must re-imagine it — but first, we must re-read it.

We implement Ethnic Studies pedagogy by co-creating a learning environment with students to collectively read the word (such as written texts) and read (or make sense of) the world around us. Reading the world includes critically interrogating the origin and function of schooling: namely, the U.S. educational system was founded on stolen Indigenous lands to reify and uphold class and racial hierarchies. For example, in 1779, Jefferson proposed a two-track educational system which would allow formal education to act as a gatekeeper to wealth. Early New York public schools “[emphasized] discipline and obedience qualities that factory owners [wanted] in their workers.” Many antebellum Southern states enacted anti-literacy laws upon enslaved people. Indian boarding schools from 1860 to 1978 sought to forcibly convert children to Christianity and “kill the Indian and save the man,” a catchphrase expressed by Richard H. Pratt. These boarding schools caused widespread abuse, death, and intergenerational trauma.

Despite important gains in education equity through Brown v. Board of Education, the Civil Rights Act of 1964, the Equal Education Opportunities Act of 1974, and IDEA of 1975, schools today still function to replicate not only racism (for example through the school-to-prison pipeline) but also classism. Jean Anyon (1981) found that working-class schools defined knowledge as memorizing facts; middle-class schools, as understanding information; affluent schools, as thinking for yourself; and elite schools, as critically analyzing issues to enact change. Her findings are eerily parallel to the San Antonio Independent School District v. Rodriguez (1972) ruling, which posits that the Constitution does not guarantee the right to education and that the 14th Amendment’s Equal Protection Clause does not require “equality or precisely equal advantages” regarding wealth and the quality of education. By valuing students differently based on their ascribed role in a capitalistic society, schools reproduce working-class laborers, similar to how the New York schools functioned to create obedient factory workers. This begs the question: what is the purported vs. the actual function of school?

In light of this historical context, Orange County emerges as a site undoubtedly shaped by 1930s-1940s de facto and de jure segregation, housing redlining, school attendance zones that facilitate discrimination, and racialized social policing from white community members (Lacayo 2016). In Lacayo’s 2016 study of 40 in-depth interviews with white participants, she found that respondents “overwhelmingly characterized Latinos and African Americans as culturally deficient, problematic and inferior” and included dehumanizing descriptors like “trash” “third world” and “gangy.” Contrastingly, respondents drew upon racial triangulation (Kim 1999) and the model-minority myth to use Asians as a racial wedge. They identified Asians as assimilable to white American norms and values and deemed them “freaking motivated… proper, cleaner and conservative.”

Furthermore, OC developers and residents mentally map the county into a “north and a south with a veritable Mason-Dixon line cutting across the middle”; South County is dependent upon the labor of North County residents (just like the U.S. service sector is dependent upon cheap migrant labor from the global South), but is simultaneously hostile to their presence as potential neighbors (Maher 2004). When teaching at a high school in Santa Ana, Eunice learned through conversations with students that many of them commuted to retail and restaurant jobs in Irvine after school hours, only to return home to Santa Ana late at night. Some students worked night shifts and were too exhausted to attend class regularly. Having grown up in Irvine through her adolescent years, Eunice was very familiar with the places her students worked at, and had to make sense of the implications of this knowledge: she worked in Santa Ana, where her students lived, while her students worked in Irvine, where she lived.

With such stark racial divides shaping both the workforce and the makeup of OC neighborhoods, it is unsurprising that OC has both COVID-19 racial disparity and notoriety for COVID-denial and anti-mask protests in Huntington Beach. As of August 3, “Anaheim and Santa Ana, while making up roughly 20 percent of OC’s residents, account for 36 percent of all Orange County cases.” Additionally, the Orange County Health Officer, Dr. Nichole Quick, resigned after receiving death threats over the OC Health Office’s mask mandate in June.

OC garnered more national attention after the Orange County Board of Education published the “White Paper” recommendations on July 13, 2020; it called for schools to resume in-person instruction without masks, social distancing, or reduction of class sizes. Some of the OCBE’s arguments for the need to reopen schools mirror arguments nationwide: students’ social-emotional well-being, parents’ need for childcare, the failure of distance learning, and the role of schools as “safe places” where students can obtain free meals and find refuge from abuse/violence at home. These concerns may superficially seem well-intended, but blatantly lack historical analysis and sidestep the reality that Black and Latinx people are more likely to contract and die of COVID-19 due to systemic racism. They are based on the assumption that our pre-pandemic schooling and public safety programs were sufficiently equitable for communities of color to begin with.

This pandemic has disrupted our “normal” and has provided the opportunity to re-imagine and remake the world around us, including education. Prior to the pandemic, nationwide teacher strikes in 2018-2019 in California, Illinois, West Virginia, Arizona, Oklahoma, Kentucky, Colorado, and North Carolina renewed national discourse and laid bare the inequities facing schools today, such as large class sizes, low pay, teacher shortages, high counselor-to-student ratios, and a need for more nurses and social workers on school sites every day of the week instead of just once a week.

The inequities that the teacher strikes shed light on are ever present during the pandemic and are even more stark in the context of distance learning. Distance learning is deeply flawed because of inadequate access to internet/computers. Teachers weren’t provided consistent training for the online transition. Parent/caregiver roles shifted dramatically. Student motivation and engagement are deeply affected. Meal provision and mental health services are now more difficult to effectively distribute. But these challenges don’t justify returning to pre-pandemic models of schooling, and they absolutely don’t justify further risking the health and lives of communities of color who already disproportionately represent the population of essential workers. Throughout this pandemic, we have been working tirelessly to build digital classroom communities in which our students can feel safe and welcomed, while prioritizing self-care.

Distance learning has the potential to activate student agency, utilize critical media literacy skills (Share 2019), invite innovative adaptations (including cross-school/district collaborative projects, like this article), and learn from students as knowledge-holders and knowledge producers. In the midst of navigating a pandemic and uprising, students successfully organized to demand LAUSD to pass a no-fail policy this past spring semester and to defund the L.A. School Police Department by $25 million. Educators continue to organize around maintaining the integrity of statewide K-12 Ethnic Studies curriculum and Cal State Ethnic Studies requirements. Closer to home, Santa Ana Unified School District passed an ethnic studies high school requirement on June 9, 2020. The physical buildings may have closed, but students and educators alike have not stopped working tirelessly and joyfully toward a more liberatory future for all.

Our push to start off the school year with distance learning is not a disregard of our students’ and their families’ needs. Rather, it is an act of solidarity and love in response to a global emergency informed by thorough consideration of historical and present-day inequities. We miss our physical classrooms and look forward to when we can be in community with our students, in-person. Until then, with this portal of opportunity, “We can choose to walk through it, dragging the carcasses of our prejudice and hatred … [and] dead ideas” or we can walk through it, “ready to imagine another world. And ready to fight for it.” We want to walk through this portal and fight for what is best for us and our young people as we respond to new developments of the virus day by day: to collectively work together to re-read, re-imagine, and ultimately remake the world. Tú eres mi otro yo. 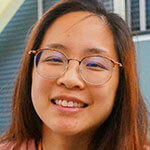 Eunice Ho (she/her/hers) is a proud graduate of the UCSD Ethnic Studies undergraduate program and the UCLA Teacher Education Program Ethnic Studies cohort. She honors both her ancestors who came before her and her loved ones who choose to stand alongside her in pursuit of justice, liberation, and healing. Today, she is a history teacher who uses humanizing Ethnic Studies pedagogy; as a graphic designer, she also visualizes data-driven research around educational inequity. Things that give her life include her many houseplants, reading, rock climbing, and watching thought-provoking TV shows. 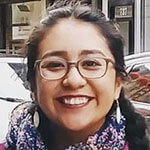 Xitlaly Sanchez, (she, her, hers) is a middle school history teacher from Santa Ana, CA. She considers herself an ethnic studies educator and a Xicana (Rios, 2008), a term that was birthed at the turn of the 21st century to highlight the multiplicities of identities such as race, class, and gender of Chicanxs.  Xitlaly enjoys cooking, watching Netflix, hiking, listening to Hamilton, and spending time with her friends and family.