When I came to the United States for higher education, I was a practicing Hindu and a seeker. Discipled by my Hindu mother, I followed and believed in the teachings of Hinduism without any concern until I was in high school. It was during my high school years that I encountered the Freedom Fighters who served alongside Gandhi to win liberation for India from the British. Their lives and ideals impacted my life and caused me to look at Hinduism with skepticism. Through this encounter, I began to understand some of the social evils like caste systems, the plight of the Dalits (untouchable caste), and the inequities suffered by women. Much of the social practices were rooted in the Hindu writings. I immersed myself in the movement and was selected to go on an all-expense paid trip across India to meet and dialogue with key leaders, including the Prime Minister, in order to find ways of bringing about social reform. After some time, I realized that while Gandhi and his team had been able to win independence for India, they had not been able to change human hearts. It became clear that transformation of the human hearts was only possible by divine intervention. It was time to explore other religions with the desire to know God, to find my purpose in life, and to bring about social change.

During my first semester at a college in the U.S., I encountered a group of students who were disciples of Jesus. They were Asian Americans, Asians, and Caucasians. This group was led by committed and dynamic staff from InterVarsity Christian Fellowship. My coming to faith in Christ was not easy, as it would go against all filial loyalties. All my life, I had lived in a communal setting where all decisions in my household were made with family input. Making this decision alone somehow seemed wrong and scary. I was also used to sharing all things in our family. Accepting Christ and receiving eternal life just for myself felt selfish. I did not want to be separated from my parents in life or in death. Yet the message and offer of Christ was too compelling not to accept. I did, but not without cost: initially, losing my sense of identity as an Indian. While the group consisted of other Asians and Asian Americans, there were no other Indian Hindus who had come to faith in Christ. There was no one there to help me navigate the rough waters of losing and reclaiming my identity as an Indian and a Christian. I had to work through this period of struggle alone.

As a Christian, I could not participate in festivals and rituals that had been a big part of my life. When some of my family members learned about my conversion, they asked that I not let my mother know about it because it could kill her. From my childhood, every December/January, my mother and I participated in 30 days of special prayers and pujas. My first visit back to India, after four years in the United States, was during this 30 day period of prayer and worship. When my mother saw that I was not going to join her in prayer and worship, it broke her heart and she felt like she had lost me. My whole family felt betrayed.

However, it was precisely through my trials and challenges that I would grow in my knowledge, experience, and faithfulness to Christ as Lord and Savior. My entire Christian experience and ministry can be described as a journey through the wilderness to streams of living water. There were many unpredictable and unknown paths along the way. My whole reason for coming to the United States was for education, which I hoped to utilize by teaching in India. Once I committed my life to Christ, I would learn about the mystery of God’s plans for my life through unexpected life experiences and decisions.

The first of these unexpected decisions was to give up a scholarship and admission to Claremont Graduate University and instead enter seminary. The next challenge came when I sensed God leading me to minister in a 100-year-old church that was predominantly white. This church had never had a female minister, let along a South East Asian woman serving in this position. This church was also the place that I had grown up spiritually and been mentored by members of the congregation; hence, some could not envision me in this position. During the time of preparing for my credentialing, I received an anonymous letter from someone in the congregation asking me when I was going to return to India. There were moments that I desperately wanted to find another church, but the Lord’s plans for me would not allow me to go anywhere else. I did not want to be a pioneer or pathfinder. It was not my desire to be ordained and become a pioneer in this church, but the Lord wanted to grow us all up together and I became the Lord’s tool. The ordination was a requirement of the immigration office for a work permit, and there was no escape from it for me or for the church if they wanted me to work for them. Together, we embarked on a four-year journey to the day when I would be ordained and receive my permanent residency to work at the church as an associate pastor. What I did not know then was that the denomination had never before ordained a woman of color. I would be the first.

My years of ministry at that church had some great moments where I experienced great freedom to exercise my gifts as a woman. However, nothing of my Indian identity would factor into most aspects of the ministry. The church was not yet open to appreciating or incorporating other cultural expressions of worship or practices. This is an area where many churches, while open to and fully embracing multiculturalism, have yet to find ways of making the worship service an expression of its multicultural staff or congregation. Some think that singing songs or reading Scriptures in another languages makes the service multicultural. It takes more than songs and readings to celebrate the diversity and richness of cultures without compromising the gospel.

Being in a predominantly white church and a leadership structure that resembled the business or corporate world was a vulnerable place for me as a female Indian minister. As much as I loved and cherished the opportunity to serve my home church, I experienced both discrimination and intimidation from some in leadership. In spite of it all, I would not trade my call nor the years of service as a pastor for anything in the world. They remain as some of the most fulfilling years of my life and ministry.

It was after my service at church and during my time of adjunct teaching at the American Baptist Seminary that I met Dr. Tim Tseng and other Asian American theologians, pastors, and scholars and found kinship and solidarity in a powerful way. The Institute for the Study of Asian American Christianity would enable us to produce a Reader, which would give AA and API theologians a voice and a platform to write about their identity and faith development. This Reader included engaging and provocative descriptions about immigration and assimilation. Given the diversity of writers and its uniquely Asian American viewpoints from the theological, historical, sociological, and literary viewpoint, it would be one of the first of its kind. We have used the Reader to offer classes to churches interested in understanding Asian American Christianity. This Reader is an invaluable guide in continuing the dialogue about the impact of theology in understanding the Asian American experience and Asian American Christianity. My engagement with this Institute and its founders brought greater freedom to express myself as an Indian Christian in academia and in the church.

My interest in missions would also take a new turn when the Lord called me to start a home for orphans and widows in 2004, Little Flock Children’s Homes, Inc. Since then, every year, teams from the USA and other parts of the world have been going to India to serve in the children’s home and the village ministries. Orphaned and abandoned children have been able to experience the healing presence of Jesus and rebuild their lives. Several are in college, and a few have graduated and are well employed. Every time I am back in the village surrounded by temples, shrines, and the people’s dependency on the idols, I am grateful for the freedom I have in Christ. The mission is trying to reach out to the village community through holistic ministries of medical care, education, and job training.

Another unexpected and wonderful opportunity that the Lord planned for my life was the invitation to teach at the Sam Higginbotham’s University of Agriculture, Technology, and Science. I teach Spiritual Formation to doctoral students in the department of Advanced Christian Studies. My experiences as an Indian Christian and a woman enable me to challenge my students who are primarily pastors and educators to understand and live out their Christian experience from an Indian rather than a western perspective. In each of my classes, students are required to contextualize worship services without any semblance to western forms of worship. Many churches in India still follow some if not most of the western forms of worship services in their churches. They are learning more about the importance of incorporating Indian experiences along with Indian music, art, poetry, and storytelling in the creation of their worship services. Spiritual formation is also helping them to embrace who they are as Indians and see the uniqueness of their experiences as Indian Christians in this world.

My journey continues now in both the United States and India, and I am becoming more comfortable as an Indian Christian. Once I had left all things Indian to practice Christianity as it was then expected of me in America, but now, the rich Indian traditions and cultural teachings enhance my Christian worship and complete my celebrations. It has enabled me to empower others to embrace their race and ethnicity as a gift from God and to share them with all whom they encounter in their life. 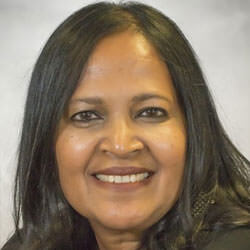 Viji Nakka-Cammauf is the President of Little Flock Children’s Homes a ministry to orphans and widows . She is on the faculty of Sam Higginbotham’s Institute of Science, Agriculture, and Technology, in India where she teaches Spiritual Formation for doctoral students. She serves as professor of Record for the Perspectives Study program. She coleads and lectures for the India Mayterm Program for Westmont College in Missions and Social Justice. She is the editor of “The Asian American Christianity Reader” for the Institute of the Study of Asian American Christianity. She has led many short term service teams to Mexico and India and mentored young adults and college students pursuing ministry and missions. Viji serves on several ministry boards including the Harvest Group, the William Carey Heritage Foundation and Covenant World Relief. In the past Viji Cammauf has served as an Associate Pastor at First Covenant Church in Oakland. She has spoken at numerous churches and student retreats and conferences and serves as a mentor to those serving in ministry and missions both locally and globally. Viji holds an BA and MA in English and PhD in Theology and the Arts.