Part of 2 of in
BY MATTHEW KANG
PHOTOGRAPHY BY WONHO FRANK LEE
Aug 01, 2015 | min read
Part of 34: Have You Eaten?
0 Snaps
0 0 Snaps
Oops! Something went wrong while submitting the form.

From grilled porterhouses to lobster rolls, Matthew has had the finest food in all the land. Here’s a look at why he keeps eating, and the meal he’s most eagerly awaiting.

DID YOU EVER WONDER why one of the things we do at church is take a piece of bread and eat it along with some grape juice? I’m partial to those churches that use real wine, though I suspect that those congregations opt for the cheap and overly sweet Manischewitz, which is a kosher wine that Jews today often use for their Passover celebrations.

We like to become solemn, introspective, and reflective during communion, but I’m the weird guy at the end of aisle thinking about the actual flavor of the bread.

I’m the weird guy at the end of aisle thinking about the actual flavor of the bread.

You’ve probably never thought about that little wafer or loaf or maybe even sweet, plush Hawaiian bread, if your church likes to go that route. After visiting churches all around the globe, there’s an endless variety of flavorless communion breads. And I’m thinking that might be a shame.

I sometimes like to imagine the disciples and Jesus reclined around a dining room, upstairs in some dark candle-lit home in Jerusalem circa A.D. 30. The room is mostly quiet, except for the clanging of rough utensils and some clay plates. Everyone is fixed upon a man who takes a loaf, breaks it, then says the immense words: “This is my body, which is given for you.”

Let’s think about what the bread that Jesus is breaking would’ve actually looked and tasted like. As part of the Passover meal, which God instituted in Exodus to the Israelites who were fleeing Egypt, that bread had to be baked without any time to let it rise. That means that it didn’t use any yeast that would have allowed it rise.

Yeast is a tiny fungi that helps bread develop a luscious chewy texture, as it consumes any residual sugars in the dough and releases pockets of carbon dioxide gas (hence the spongy look of bread). Most wheat flour contains a good level of gluten, which gives the dough the “stretchy” material to expand and create those bubbles. You’ve broken a fresh French baguette and experienced when this works well, because quality bread has an incredible pliancy and almost elasticity to it. I hate to disappoint you, but Jesus was most certainly not eating this kind of baguette. So did the Son of God just equate his body, the physical realization of God, to a relatively bland cracker?

So, did the Son of God just equate his body, the physical realization of God, to a relatively bland cracker?

It’s strange to think about the mechanical aspects of communion in this way, but for me, it drives all my thoughts about food. After all, I write about food for a living. I eat out at restaurants and local cafes nearly 10 times a week for my job — generally at new trendy spots, but sometimes at old standbys and timeworn dives that no one likes to talk about anymore. It’s a pretty fun way to live, but eating all the time does make me a little bit pensive about the whole endeavor. I often wonder, what’s the point of all this eating?

While I get the opportunity to taste every kind of delicious thing under the sun, my thoughts nearly always come back to this moment in the Bible, when Jesus referred to his body, which was to be sacrificed on the cross, as a flavorless cracker.

Bread, it turns out, is pretty important to God. He dropped flakes of it upon the Israelites when they were wandering in the desert. Melchizedek, an archetype or predecessor of Christ, who was both a priest and a king, brought out bread and wine when he blessed Abram — you know, the guy that eventually became Abraham, the father of God’s people.

Jesus prayed “Give us today our daily bread” as part of the Lord’s Prayer. He took two loaves of bread and five fish, then proceeded to feed five thousand people — maybe more because women and children weren’t counted.

Why does God care so much about bread? In fact, why does God care so much about food? I’ve let those questions soak into my thoughts while I sit at tables all across Los Angeles, dining with church buddies, friends, family, and my girlfriend.  Food isn’t just a common thing in the Bible — it’s everywhere. I can keep going with examples, but I’ll just mention some more salient ones here, along with a few obscure tidbits.

Why does God care so much about food?

God uses fruit from the Tree of the Knowledge of Good and Evil as a marker to separate the edible from the not-to-be consumed things in the Garden of Eden. Adam and Eve just had to eat that fruit from the tree God instructed them not to eat from.

In the law, God lists a multitude of animals that are considered “unclean” for the Israelites to eat, traditions that continue today in kosher foods. God then later came to Peter in a vision in the book of Acts to declare those previous “unclean” foods as “clean”. A seminal passage for all omnivores like myself, I was very happy to read this and determine that God does not disapprove of my love of lobster rolls — although lobsters were previously considered unclean.

Sprinkled throughout the Old Testament are further examples of food as a conduit of God’s instruction, teaching, and revelation. Esau, famished after a day in the fields, sells his birthright to Jacob for a conveniently prepared bowl of lentil stew, establishing the younger twin as God’s chosen one. Maybe Esau should’ve had a Snickers bar to quell that hunger, though that crafty Jacob knew to hire his kitchen-savvy mother to whip up a great stew. Later in the Old Testament, God preserves a widow when the prophet Elijah declares that her jars of flour and oil would not be emptied despite a wholesale drought in Israel. What did she do  with that extra flour and oil?

And then, perhaps my favorite passage ever in the Bible about food: Isaiah 25.

Isaiah, which stands as the most epic prophecy in the Scriptures, goes into a multi-chapter section that compares and contrasts salient themes: destruction and impending judgment, and then the redemption of God’s people, both Israel and “all peoples”. The crux of the passage comes in verse 6: “On this mountain the Lord of hosts will make for all peoples a feast of rich food, a feast of well-aged wine, of rich food full of marrow, of aged wine well-refined” (Isaiah 25:6 ESV).

Wait, did God just say that a bunch of people would party it up with some grilled porterhouses, roasted pheasant, and a bottle of 1967 Bordeaux wine? The Hebrew language uses repetition for emphasis, so instead of using bold, italics, or caps lock, the double-mention of food and wine is Isaiah’s way of highlighting the part about food.

God is quite the foodie, it turns out — He did create all food. Why the celebration, why the specific notion of fat, rich, delicious food along with aged, mature, complex, memorable wine?

I’m not exactly sure why, but a part of me is convinced that God is making a point about the excellence of that day, the inherent goodness that will come. Food is so many things to God: a vehicle for showing obedience, a tool for showing His faithfulness, a figurative example of His sustenance, a representation of His abundant blessings, a memory marker for His works.

God is making a point about the excellence of that day, the inherent goodness that will come.

In the passage just after the “marrow” and “aged wine”, God continues, saying, “And he will swallow up on this mountain a covering that is cast over all peoples, the veil that is spread over all nations. He will swallow up death forever” (Isaiah 25:7-8 ESV).

That’s a pretty clear pointer to Jesus, who “tore the veil” that separates God from His people — remember the curtain that ripped in the temple during the crucifixion? Jesus, in his death and resurrection, is the answer for our death, the ultimate triumph over the problem that plagues every single one of us. Let that sink in — God just said he’s going to handle the whole “death” problem, and he also said he’s going out of His way to prepare a pretty awesome feast to celebrate.

So in trying to connect the two things, I keep going back to that flavorless cracker that Jesus likely ate and the kind of bland “bread” that might sit on a tray at your local church during communion. In heaven, God is preparing a banquet filled with delicious things just for us to enjoy.

When I go about my job, driving around, hunting for that delicious lamb vindaloo or cabeza taco or roasted chicken or plate of grilled carrots, I can rest assured that we won’t need to eat flavorless crackers and drink grape juice to remember Christ, because He’ll be right there, eating and drinking with us. I can be confident that God’s feast will be a meal so epic, so legendary, so amazing, so eternal, and so fulfilling that we’ll never look back. Are you hungry for His rich food and aged wine? 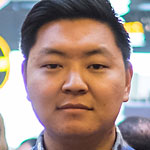 Matthew Kang is the editor of Eater Los Angeles, a restaurant and dining website. He also owns Scoops Westside, an artisanal ice cream shop that showcases unique flavors daily. He graduated from the University of Southern California with a business administration major in 2007 and spent a few years working at a Beverly Hills bank before discovering his true calling.