A Reflection on Musculinity and Femininity

I realize that the reason I never bought into Disney’s idea of princesses growing up is because I could never relate: I could never imagine myself as a (Disney) princess because I didn’t fit into their image of what a princess was. I grew up with Mulan, with Chihiro, Sheeta, Mononoke, and Nausicaa; and though some of them are princesses, I never thought of them as princesses because they didn’t fit my definition (read: Disney’s definition) of a princess. To me, they were warriors.

This photo is important because of the girl you do not see: she wears a pink frilly dress, a silver tiara, and sparkly shoes. / Hear her telling her cousin that she wants to climb the tree because she saw me / first. Hear her cousin swearing and repeating, “真的嗎? 你真想爬的嗎?” Really? Are you sure? Are you sure you want to climb? Hear him flipping out, ‘Fuck, fuck fuck,’ worried, shocked, and surprised, telling us that before this moment, she never wanted to do anything physically active. Hear us / encouraging her, holding her as she wrapped her hands around the tree. Hear her smile. Hear her courage grow.

The first weekend of November was the last warm weekend before the brutal onslaught of Torontonian winter, so my friends and I decided to spend some time outside and take photos together. I hate being the center of attention, and the whole experience made me feel like an awkward beanstalk. To be honest, I have always wanted to look elegant and poised, but it is my roommate who takes the cake, looking sexy and elegant, goofy and playful. I love her wide smiles, but her seriously photographic smolder makes me melt. Reflecting on the experience, my friend taking the pictures mentioned how we needed to find better ways to capture who I was on camera. My roommate replied, “I think my style is just more conventional. I don’t know if any of those shots bring out my personality, but I can fit into the look you’re going for ‘cuz the way I look is the conventional form of femininity. Dawn’s personality and look is unconventional, and you have to work outside the box of what we’d normally think of when we see nicely posed women.” And it’s true: the best photos of me were not those taken against brick walls or bridges — those are the shots where I look the most out of place and awkward. It was as if the invisible and self-imposed pressure of having to conform to an idea of what I’m “supposed to” look like placed a greater spotlight on the areas where I don’t fit the mold. The best shots of me were the ones where I was climbing on a tree, or sitting on a park bench.

I’ve always struggled to identify with the word “female”. For me, the word has carried burdens and connotations I didn’t want to associate myself with: gossip, jealousy, pettiness, vanity, emotional irrationality (and vice versa, irrational emotionality)… and then there was this expectation that I ought to be delicate, proper, or fashionable. These ideas of femininity stemmed from observations of my mom. Until I left for university, she was a volatile caregiver, and a measure of who I didn’t want to become. I also found it difficult to relate to my female peers: many of them liked boys, makeup, and pop music, whereas I simply wanted to climb trees, build LEGOs, imagine magical frameworks (think fanfic), and kick soccer balls.

For a time, I tried habiting male skins to no avail, and eventually I had to accept femininity as part of my identity. As I journeyed through a period of self-discovery, I habited many versions of femininity and have hurt myself trying to get into and out of those skins. In my pursuit to figure out who I was, I have been catcalled, brushed off, and underestimated. I have also been spiritually, emotionally, physically, and sexually abused by men close to me. Uncovering the gift that is being a woman also came with uncovering the burden that is being a woman. The worst part was that I found it immensely difficult to share my frustrations, sorrows, concerns, and scars in the evangelical spaces I inhabited, particularly within my suburban Chinese-Canadian church, a place that preached the idea of church as a family without quite knowing how to be one.

I recently read a book written by two evangelical theologians in response to second- and third-wave feminism. The stated goal of the book was to nurture and cultivate mature male role models in order to prevent further breakdown of the nuclear family and, by extension, of the evangelical church in American society. However, this book also centers around the idea that men and women have been created by God to be certain kinds of people. The complementarian authors believed it was unbiblical for a woman to try to embody masculine traits (i.e. leadership), and for a man to cower from his leadership responsibility. While this stance might sound outdated in our increasingly egalitarian society today, I lost a relationship, a community, and friends simply because I could not conform to this hierarchical way of living. The complementarian woman was one more skin I tried and discarded.

But there was one particular passage that elicited a strong emotional reaction from me. The passage insinuated that muscular women, because of their desire to “be like a man”, would find themselves lacking the ability to have insightful conversations or attract a man sensitive to their “feminine needs”. I suppose this struck a nerve because as a rock climber, muscular strength is an asset, not something to be ashamed of. While in the climbing community, muscles are talked about in jest and good fun, there are too many of us who are told we are “too muscular” or “look like a man” outside of the gym. I don’t think it’s fair to judge the entirety of someone’s being on the basis of any physical attribute.

For me, climbing has shown itself to be a hospitable sport, fostering hospitable communities. The welcome, faith, endless encouragement, and acceptance I’ve received from those I’ve met at the gym is what gave me the space and time to discover what it means to embody the body I’ve been given. Climbing taught me that my body is a living thing, not just something “I have”. Climbing is also indiscriminate, which means that the gender of the climber doesn’t matter on the wall: each person climbs differently, preferring certain movements over other ones. There are always things to learn whether the climber is male or female. It’s not that the sport is gender-neutral or height-equal, but it celebrates the diversity of bodies.

Inhabiting this space and learning to accept, celebrate, and push my body has softened my resistance toward my own femininity. Many of the important women in my life are the ones I met at the gym, women who affirmed the values and desires I had and did not make me feel like an alien amongst her own people. The beauty of being a part of this community was that I often had women to look up to and women who looked up to me. I grieved and celebrated with a queer friend. I grew to admire two Quebecois sisters who, in their mid-fifties, were tenacious on the wall and comfortable wearing short compression shorts and tank tops, revealing slightly wrinkled but chiseled physiques. I’ve learned courage from women who were afraid of heights but would try to reach the top anyway. Together, in this male-dominated space, we women pushed each other onwards and upwards. Together, we encouraged each other to grow more fully into who we had discovered ourselves to be.

Over the last seven years, I have ached and agonized over whether or not I was a “good enough” Christian simply because I felt so out of place as a woman in the evangelical spaces I had inhabited. I’ve since grown into a better understanding of my self — one that lives out of the redeeming work of Christ, rather than the legalistic rules that we’ve imposed on each other — and am learning each day what it means to fully embrace the being that I have been gifted with, “proper” or not, “feminine enough” or not. I am discovering alongside others what it means to be faithful to the Kingdom of God that proclaims healing, wholeness, freedom and love to all who will hear, regardless of gender, sexuality, denomination, race, or culture.

The most liberating thing I've learned about serving our God is that God is a God of surprises with a capacity for grace, mercy, compassion, and love that extends beyond all boundaries. God is a God that cannot be boxed in, a God whom we cannot comprehend though we try. Yet God is also a God who allows us and extends to us this privilege of trying to comprehend by giving us intellect, emotions, intuition, community, the Spirit itself, and (the life and being of Christ as recorded in) scripture.

I write this to the women who feel they do not belong to the believing community as a result of what has happened to them or who they have discovered themselves to be, and to the women who feel as though femininity is a foreign or oppressive word. May the arms of the Mother draw you into Her warm embrace. May you hear Her whispers of acceptance and care. And may you find a community of others who can enflesh Her love to you and give you life, hope, and the courage to love and life again. 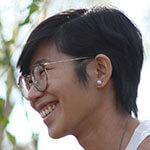 Dawn Chow (she/her) is a lighter and dustier blue than she was a few years ago, a peculiar sign of growth and becoming. She is currently a seminary student (M.Div in Spiritual Direction), an editor for Ricepaper Magazine, and an apprentice setter at her local rock climbing gyms. She is sustained by baos and tea, and marries poetry and photography on IG, @sunrisechowie.