Searching for the Language of Pain

Part of 8 of in
by Chris Chacko
Illustrations by Sarah Chong
Jul 01, 2016 | min read
Part of 45: Imago Dei
0 Snaps
0 0 Snaps
Oops! Something went wrong while submitting the form.

CLOSE TO THREE YEARS AGO, my sister and brother-in-law got married. No matter your birthplace or practicing faith, weddings are intrinsic to being Indian. It is the culmination of families — small circles of culture in their own right — in an extravaganza of friends, more family, food, and of course, dance. No Indian wedding can be complete without it. That is why, as the brother of the bride, with some dance experience to my name, there were massive expectations for me to create a memorable piece.

In a last-minute run-through of one of our stunts, I ran forward and then backward, throwing myself into the arms of five of my closest friends. Instead of them rotating my legs over my head, giving me the impetus to do the flip as we had previously practiced, I rose high, only for my head to come crashing straight down into the floor as I slipped through their fingers. I found out two years later that I had been inches away from breaking my neck that night — a trust fall gone terribly wrong.

I found out two years later that I had been inches away from breaking my neck that night — a trust fall gone terribly wrong.

I did what any sane (or not so sane) entertainer would have done when my cousin, the emcee, arrived minutes later, asking us if we were ready to perform. I prayed it out with my team and we took the floor. And for the first time, every one of our stunts hit — including the one that had just failed. But the damage was already done. That night, as friends and family prepared to separate for different life adventures and said goodbye, I could not move my neck. Two days later, I started grad school on the other end of the country. No family, no friends, and an intransigent neck.

In the three years that followed, I began to experience pain in ways that I had never felt before. Migraines that I had as a child now blinded my sight with their intensity, causing me to scurry under sheets in a dark room to lie as prone as possible. A vise-like grip would appear out of nowhere, starting at the base of my neck and spreading across my head and back, causing my body to spasm in pain.

To express the visible world can be daunting at times; to explain my invisible, yet real, pain-filled reality seemed impossible. For me, communication was always a devious joke where I ended up being the punchline. Having a speech impediment growing up forced me to focus on one language, English, and I was unable to learn my native tongue, Malayalam. While there are barely any lingering effects of the impediment today, its consequences are still felt through certain social situations I am unable to enter. There is an unspoken understanding in my community that those who cannot speak Malayalam are seen as "less of an Indian".

To express the visible world can be daunting at times; to explain my invisible, yet real, pain-filled reality seemed impossible

While I had grappled for many years with my inability to connect with my Indian community, through pain, I experienced such an extreme disconnect with God that I had never known before — especially when I needed God the most. God's silence seemed to smother my voice and my desire to speak to God. There seemed to be no point in talking if no one was listening.

God's silence seemed to smother my voice and my desire to speak to God.

I lived a life that many people saw, but few truly knew about. While I mentioned the injury to several people, I did not want anyone's pity. After all, I had choreographed the dance — better for me to suffer with the consequences than have someone else injured on my conscience. I returned home after graduation, jobless and still dealing with intesifying pain. Night after night, tidal waves of pain led to insomnia, and I turned to any outlet to knock myself unconscious.

Medical bills quickly escalated in an attempt to find a clear-cut remedy to an illness that has still not been fully diagnosed. My remaining clusters of friends dwindled, and I felt a potent mix of disappointment and rage. How could they not relate at any level? Instead of the modicum of empathy that I expected to receive, I would often get silence or pithy responses. I would try to flood my listeners with my life story, desperate for any part of it to connect and stick to that seemingly impenetrable wall of another human being.

We seem to have a spectrum of pain through which we view the world. Certain problems are viewed as true suffering; others are tossed aside as dismissible. We preemptively make judgments about a person's experience before getting to know a person's perspective. By classifying people's experiences into neat categories, we lose the vivid messiness of the individual's life and the ability to truly care for that person's heart. Learning this the hard way did not prevent me from committing the same mistake toward others. During this period, I would often listen to others rattle off their list of current neuroses and problems while gritting my teeth at their banality.

Certain problems are viewed as true suffering; others are tossed aside as dismissible.

While I didn't want people to go through my experience, I did want them to know it. Knowing my pain would not take away the visceral intensity of it, but it would allow people to begin to understand me. Otherwise, I was alone. At least validation would allow me to receive vindication that my experience should be classified as extreme pain — justifying me to wallow in my pain, my subsequent sin, and my resentment toward God and other people.

But I wanted to be completely free of pain, the struggle of connecting, and the awareness that no validation would satisfy. I wanted to be free to be truly known. In this way, I desired a tangible God through community. An invisible disease made me yearn for a visible God to hold me, to grieve with me, to tell me everything would be all right.

Where was God, the Eternal Comforter who always seemed to meet with others in their pain? Where was the God who said I was never alone? I began to dread nighttime. In the quiet, I would ruminate heavily on my life — unexamined questions bubbling to the surface of my mind — on my guilt, my shame, my sin. Was my accident divine punishment? On the dance, my life, my decisions — was I lashing out at others because I had no one else to blame but myself? It is obvious that isolation leads to the extinction of conversation for an individual. It is less clear that the lack of outward communication turns the conversation inward, a constantly bouncing tennis ball ricocheting off a garage, ready to be thrown again.

Where was God, the Eternal Comforter who always seemed to meet with others in their pain?

It is in this quiet that I heard these whispered reminders: Jesus, alone, weeping bitterly in the Garden of Gethsemane, blood pouring down His cheeks. The alienation He must have felt when His friends left Him to die while they fled into the darkness. The brutal pain of not only knowing what He would have to face, but the anticipation of agony. The utter degradation of being God and stripped naked, ridiculed by Your own creation.

But these remembrances prod me further, to look past the crucifixion, beyond what I can just see. To try to grasp being rejected out of a perfect, eternal, Triune relationship. To have the suffocating sludge of humanity's soul poured onto You as the Father turns His face away. To face the wrath of Your Father so those who nailed You to the cross could be completely free of the punishment You were taking in their place.

And I thank God that I will never have to know that separation.

I can't imagine the isolation that Jesus felt throughout His lifetime. From birth, He was surrounded by people who would never begin to understand the full extent of His experiences and purpose. He could have easily pushed people away. Instead, He invited people in.

I can't imagine the isolation that Jesus felt throughout His lifetime

Jesus' only complete relationship, with God the Father, was severed at the cross — the same relationship I am invited into as a result of Jesus taking on the rejection and abandonment I deserved.

On this side of eternity, words will never be enough in trying to explain the chasm between people. But it is in this chasm that Jesus enters: the intangible Word becoming tangible flesh, language crystallizing around a perfect God reckoning with a broken world. God used the messiness of language and pain to create connection. It is in this same chasm where I am learning to rest in Jesus, trusting that Jesus made Himself completely unknown — so that I might be known by God.

Chris Chacko is trying to find the fine line between wanting to read as many books as possible and turning his house into an abandoned library. He and his wife reside in Michigan. 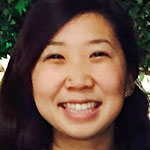 Sarah Chong loves making things, like songs and pictures and pasta. After graduating from and working at the University of California, Los Angeles, I have recently made a decision to change careers, and am currently building up a portfolio to apply for art school. You can see more of my work at: sarahchongart.com.