Part of 1 of in
By Daniel Chou
Cover illustration by Kathy Sungkaluxsa
Dec 01, 2015 | min read
Part of 38: The Next Step
0 Snaps
0 0 Snaps
Oops! Something went wrong while submitting the form.

KAN SHEN ME, XUE SHEN ME.

My mom would shake her head at me whenever I picked up the antics of certain movie characters. “Monkey see, monkey do.”

After “The Matrix”, the world began to move in bullet time for me. After “Initial D”, I would attempt drifts in my 1996 Honda Accord on the way home from school. Sometimes if there were characters with British or Southern accents, I would find myself slipping into that same accent for the rest of the week.

But more than that, movies opened my imagination to all the possible jobs I could consider. For a while, I even toyed with the idea — and the ethics — of becoming an CIA assassin after watching “The Bourne Identity”. My mom desperately pleaded with my church advisor to intervene; I begrudgingly compromised and began to research internships to study data analysis with the National Security Agency.

Underneath all these delusions, however, was a genuine, deep concern that I needed to know the one thing I was supposed to be.

While my friends knew that they wanted to be doctors, teachers, and political analysts, I had no sense of what I wanted to be. I felt like this meant that I had no passion, no purpose guiding my life.

As someone who grew up in the church, it also meant that I felt like God was too busy to place a burden on my heart, or didn’t see enough worth or potential in me to give me a call.

I craved the anointing of a prophet to tell me who I would one day become, the sight of something so miraculous that I would be drawn like a moth to its burning flames. I wanted to hear a direct voice from God calling me to something, anything — even calling me to drop everything and follow Him would suffice.

Certainty and prophecy were what I wanted to confirm that I was on the right path. Even now, years later, I still don’t have that sense of assurance or confidence. Yet, I look back on the roundabout way that God has led me throughout my life, and I see glimpses of that confirmation all along.

Certainty and prophecy were what I wanted to confirm that I was on the right path.

There was my nightly childhood bedtime routine of falling asleep to stories told by my dad or “Adventures in Odyssey”. There was my time on the school newspaper that revealed to me a desire to proclaim truth and justice through the written word. There were times of great brokenness and humility that showed me how stories allowed people to connect and see beyond their current worries and struggles.

Through it all, I wasn’t struck by some divine lightning that suddenly illuminated the landscape of my life. Instead, all I was able to see was one step in front of the other, a dance in the darkness, as I trusted God to lead me, and as we partnered in beautiful melody.

Whether you’re still wondering and pleading with God about what your future career will look like, or you’ve been at the same job for the last 30 years, we hope that you’ll continue seeking God’s direction in your life.

May we create wonderful, bold things with our Creator.

Daniel Chou (he) serves as the editor-in-chief of Inheritance and is also one of the magazine’s founders. He holds a Master of Divinity from Fuller Theological Seminary. Outside of Inheritance, he is co-founder of Winnow+Glean and enjoys roasting coffee. He posts sporadically on Instagram @dchou and even more sporadically on Twitter @danielchou. 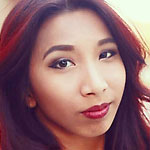 Kathy Sungkaluxsa has received a B.F.A. in illustration from California State University, Long Beach. She is currently the director of Sodium Dance Ministry, and is working as a freelance artist. She loves to eat, explore, and experience new adventures.