Striving for Justice in Immigration Reform

GROWING UP in the Asian American evangelical church, I learned that there were “good” immigrants and “bad” immigrants. I was taught that as Christians, the Bible calls us to obey the law. I was taught that those who break the law, or so called “illegal immigrants”, were taking American jobs, avoiding taxes, and draining away valuable resources that were once reserved for citizens.

I was also taught that as Asian Americans, many of our parents came to this country “the right way” — not like Latinos and others. I was taught that Asian Americans came as engineers, chemists, doctors, nurses — skilled technicians with jobs that contributed to the economy. We weren’t draining resources or taking away jobs — we were building the American Dream.

We have bought into the idea that we are “good” immigrants and the “model minority” in sharp contrast to other communities of color. We claim our place in this country as having been rightfully won through hard work and determination.

We have bought into the idea that we are “good” immigrants and the “model minority” in sharp contrast to other communities of color.

THE LEGACY OF A “PAPER SON”

This was the way I thought, until the day I realized I was a “bad immigrant”. I interviewed family members and learned about my actual immigration story: My great-great-grandfather immigrated to San Francisco from China following the earthquake of 1906. He was a “paper son” — he had claimed to be the son of a U.S. citizen, when he really wasn’t, by acquiring papers of another person.

The Chinese Exclusion Act of 1882 essentially banned people of Chinese descent (and later all Asians) from immigrating to the United States, so my great-great-grandfather had to navigate and find a way into the U.S. in order to secure work and provide a better life for his family back in China.

My great-great-grandfather had to navigate and find a way into the U.S. in order to secure work and provide a better life for his family back in China.

My great-great-grandfather’s story is not unlike that of many immigrants today. It’s the story of the American Dream and finding a better life in America for our children and our children’s children. My great-great-grandfather probably envisioned his own children and his children’s children participating fully in our American democracy, not treated as second-class or denigrated as “illegal” human beings. Confronted with this reality, I decided to embark on a spiritual journey in discovering what the next America could look like.

As a bright-eyed college student, I was passionate about changing the world. I majored in community development, sifting through pages of readers and textbooks about global and local community issues.

I was also sifting through the pages of my burgundy leather NIV Bible — the spheres of my Christian faith and my passion for social justice started to collide in my understanding of Jesus and the Bible. He must have, I concluded, identified with the plight of immigrants.

As a Jew in first century Palestine, Jesus would have had the story of the exodus from Egypt deeply ingrained in all aspects of his life. It was probably told and retold to him by his community through his childhood and adulthood. The narrative of a people suffering dehumanizing oppression in a strange land declared a strong ethic of hospitality and compassion when it came to treating foreigners and sojourners. This is stated most clearly in Leviticus 19:33-34 (ESV):

Here is the biblical recognition that all people — regardless of immigration status and citizenship — are made in the image of God and deserve respect and dignity as human beings. Is that not God’s plan in the end? Confronted with these words, I prayed, “God, what is my role in all of this?”

All people — regardless of immigration status and citizenship — are made in the image of God.

A MORAL AND SPIRITUAL CRISIS

Since then, I’ve answered a life calling to pursue social justice. I’ve had the opportunity to work on many immigrant rights issues as a community organizer for Asian Americans. Through this work, I have deepened my understanding of how my own immigration story connects to issues of social justice and my faith journey. I’ve also learned from the stories of community members and leaders alike.

According to the Pew Research Center, there are an estimated nearly 12 million undocumented people living in the shadows in the United States that live every day with the fear of being detained or deported. We’ve also seen a record number of deportations, each one resulting in lives shattered and families broken. In 2013 alone, over 400,000 people were deported by the Obama administration, separating children from parents, siblings from siblings, and tearing communities apart.

In 2013 alone, over 400,000 people were deported, separating children from parents, siblings from siblings, and tearing communities apart.

As Asian Americans, the immense weight of our broken immigration system affects many of our own community members. Many of our own family members are grappling with personal and family crises.

In a courageous act last November, Ju Hong, a UC Berkeley graduate and undocumented U.S. resident, interrupted President Obama in a speech in San Francisco with this message: “I need your help. My family will be separated on Thanksgiving. Please use your executive order. You have the power to stop deportation.” The undocumented young leader directly challenged the most powerful man in the world to relieve the plight of his family as well as that of millions of individuals under the current broken immigration system. His brave and courageous act made international headlines by highlighting immigration as something that matters to Asian Americans as well, not just other immigrant communities.

Under current U.S. immigration policy, if you already have immediate family in the U.S. and are seeking to emigrate from an Asian country, it would currently take you up to two decades to be reunited with your loved ones. Of the five countries that have the longest waiting lists for immigration to the U.S., four are Asian countries: Philippines, India, Vietnam, and China. Our broken system is especially harsh to Pacific Islander and Southeast Asian communities — they are deported at a rate three times higher than other immigrants.

As we reflect on Jesus’ ministry on earth, it is clear that we as Christians — particularly as Asian American Christians — have the moral and spiritual imperative to uplift the stories of our own community members and call on decision makers to establish good immigration policies.

We as Asian American Christians have the moral and spiritual imperative to uplift the stories of our own community members.

HOW TO GET INVOLVED

I trust that God is guiding our collective path towards restoring peace. While the task ahead of us is difficult, I hope that we will push forward to seek justice and peace in the face of an especially daunting challenge. As Asian Americans, we need to draw from our own intimate knowledge of what it means to be on the margins and end the injustices imposed on our communities. We not only need to advocate for our own community but we also must lock arms and hands with other community members who are fighting for many of the same rights.

I trust that God is guiding our collective path towards restoring peace. 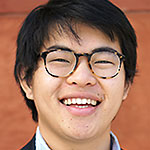 Nathanel Lowe is the Community Engagement Coordinator at Asian Americans Advancing Justice - Los Angeles and a member of Chinatown Community for Equitable Development (CCED). Send him a Tweet at @natlowe.