A Story of Overcoming Abuse

Part of 3 of in
By Giovanny Panginda with Bonnie Nakasuji
Photography by Alisa Wong
Sep 01, 2014 | min read
Part of 27: Not Alone
0 Snaps
0 0 Snaps
Oops! Something went wrong while submitting the form.

What happens when your fairytale beginning turns into a nightmare?

Bonnie’s voice began to quaver. She took a long sip of her tea and stared into the cup as she recalled her first marriage, which took place about 40 years ago. She paused and mentally assessed the logic of her younger self and her decision to get married at the age of 21.

“I think I wanted to be independent and make my own decisions. I think there was this teenage rebellion — [this belief] that I can make things work. Sure, I could see some flaws in him before we got married, but the good we had then outweighed it.”

A New Jersey native, Bonnie moved to attend the University of Southern California (USC) while living with her uncle, a pastor of a Los Angeles church, and his family. It was only after completing an internship at a medical clinic that Bonnie met her first husband who worked as an orderly.

“He was very musical. He was Italian. He was Catholic,” Bonnie recalled, “He didn’t really go to church, but because he knew it was important to me, he started coming to our church. They accepted him. I felt like he cared a great deal about me — being interested in my church and my friends.” After nine months of dating, they got married.

Bonnie looked down at the dining room table and placed both hands on her teacup. She hesitated for a moment, trying to find the right words, but continued, “I didn’t see his [abusive tendencies] until after we were married. I did know that his self-esteem wasn’t very good. So I did a lot of, ‘You can do this.’ I was very encouraging to him — I felt like that was my role in the relationship.”

I didn’t see his [abusive tendencies] until after we were married.

There were several things Bonnie’s first husband wanted to accomplish, so she played an integral role in cheering him on to finish school. Her first husband went through a program for computer science, but did not finish. That was the start of the shift in their marriage.

“I would ask him why he was at home instead of class, and he gave me these lame excuses. I’d encourage him by telling him that if he started something, he should finish it. We invested a lot into his education,” she confessed. “For different reasons he wasn’t being successful.”

Bonnie’s first husband went from job to job. Without a stable income, she dropped out of school in order for them to make ends meet. It was during this change in roles when the abuse occurred.

“Sleeping” was a euphemism for her recovering from her drastic injuries and hiding from the world so that they could not see her injuries.

“Sleeping” was a euphemism for her recovering from her drastic injuries and hiding from the world so that they could not see her injuries.

“He hit my face,” she said. “There was also a lot of pushing and shoving into furniture.” Bonnie’s face began to tense as she shared her second time getting abused. “I tried to leave, but he kept socking me. I was able to eventually leave our apartment and he followed me, pulling on my arm to come back. So we had a physical altercation on the street.”

As if by chance, a police cruiser was patrolling the area and asked them what was happening. Instead of revealing the truth, Bonnie told the police officers that nothing was wrong. The police officers, on the other hand, persisted and asked Bonnie if she wanted to press charges.

“I said no,” Bonnie divulged in shame. “I don’t know why I said that. Perhaps, I thought I could control the situation.”

Sadly, she could not. At first, she tried to decrease her first husband’s abusive tendencies. On the weekends, Bonnie would invite her good friend to hang out. They would study together and prepare Sunday school lessons for their church. It was also a way for Bonnie to protect herself because he would not get violent in front of her friend. It took Bonnie a third abusive episode for her to understand fear.

It took Bonnie a third abusive episode for her to understand fear.

“When we argue and he starts pushing, I know it’s just going to escalate. The third time he abused me I had enough. I called the police. I also called my uncle.”

While the police handled the situation in the apartment, trying to calm her first husband down, Bonnie fled and stayed with her uncle. But her fear intensified, not just for herself, but also for her family. “He knew where I was. He kept calling and calling and calling. And then he threatened me and my family. He said he would kill my uncle and my cousin. At that point, I needed to go back to New Jersey because I was putting them in danger.”

Barely 22 and 10 months into the marriage, Bonnie took a year off of school, left for the airport, and got a one-way ticket to New Jersey. But the threats didn’t stop.

“About a month or two later, he actually showed up in New Jersey! I was working at a Macy’s and my dad called me and told me not to come home from work.” Her first husband and her parents exchanged some words, but he eventually left and she filed for divorce soon after the event.

Internally, Bonnie struggled with the concept of divorce, knowing full well the stigma associated with it. In her mind, divorce also meant giving up her hope for a future, especially the hope of one day having a large family. Fearing for her safety and her life, she felt divorce was her only option and she was prepared to deal with the consequences of her choice.

Fearing for her safety and her life, she felt divorce was her only option and she was prepared to deal with the consequences of her choice.

“I had a conversation with my uncle before I came back to California and I knew what divorce meant. I couldn’t remarry, at least from the Biblical standpoint because it didn’t fall under the Biblical standards of remarriage or divorce: 1) When your husband dies or 2) When he is unfaithful.”

But her uncle provided an unexpected answer. “My uncle told me, ‘You were married in the state of California. In the eyes of the state, you were legally married. But whether or not God saw that as a marriage is unclear.’” While her uncle’s response gave her some hope, she still struggled with the thought of ever remarrying, let alone dating again.

After one year in New Jersey, she returned to her studies at USC. It was then that she met another student named Paul. Bonnie grew up with Paul at her uncle’s church and they both went to USC. As a result, she tried to set him up on dates with one of her roommates until one fateful day.

“Paul said that he was going to this wedding and asked if I wanted to go. I said OK.” Bonnie said with her face lit up with glee. “At the wedding, we were sitting at a table and one of his college friends had a seizure in the middle of the reception. He was sitting next to me so I got up and helped him, laid him on his side, and cleared the area. Paul and I followed the ambulance to check up on his progress. We were up all night and went out for coffee. We really connected at that time. The relationship changed from ‘You’re a friend. You’re a great guy’ to ‘Now we’re connected.’ That was pretty much our first date.”

At the time, with divorce in her mind, Bonnie panicked. “I could tell he was into me so I didn’t call him. In order for me to know it was God’s will, it couldn’t come from me. I couldn’t encourage the relationship. That night I decided I couldn’t pursue this and lead him on when I can’t even be married in the first place!”

In order for me to know it was God’s will, it couldn’t come from me.

“So I pretended that I wasn’t interested. I didn’t call him. If he called me to ask me something, I’d answer nonchalantly or casually.”

Paul was persistent and kept pursuing Bonnie. During the first few months of dating, Bonnie and Paul met some resistance from others against the relationship, namely Paul’s mother, who worried about the stigma of divorce. But Paul didn’t care what anyone else thought. He loved Bonnie.

“The first time he told me he loved me, I burst into tears. My answer was, ‘What does that mean?’ That wasn’t exactly what he expected me to say. He turned red because he knew what that meant and that’s not exactly how I wanted to get proposed to.”

But why did Bonnie burst into tears when she heard the words everyone wants and hopes to hear from someone else? She wondered the same thing herself.

“I felt unloved,” Bonnie said with tears rolling down her cheeks. “I didn’t feel I deserved love. He grew up in the church. He was just very pure and I was far from it.”

“I didn’t feel I deserved love. He grew up in the church. He was just very pure and I was far from it.”

Bonnie married Paul a year later. Today, they have four children together and two grandchildren.

“The turning point for me was when I was able to say ‘My life is Your will, not mine.’” Bonnie took out her Bible and turned to Proverbs 3:5 and recited, “He will direct your paths. ‘Paths’ is a keyword ... not the paths you want necessarily but the paths He has planned for you. Being able to see that as God’s will was the turning point for me, the point which God said OK, that’s where I needed you to be.”

“And what about your church in all of this? What can the church do for women in situations similar to yours?” I asked.

“I think the church is more open to having the conversation about abuse,” she replied. “I think at the time it was very taboo, and I didn’t want to be judged. But both my churches — New Jersey and Los Angeles accepted me. They all knew me and were involved in a lot of ministries. I knew they still loved me, even though internally, I felt judged. But looking back, I think I didn’t put them in a position to have to say anything. There are churches today that have 12-step ministries, which are very helpful.”

If you or someone you know is suffering from abuse, don’t hesitate to call The National Domestic Abuse hotline: 1-800-799-SAFE (7233). 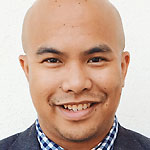 Giovanny Panginda is currently pursuing a Master of Divinity at Fuller Theological Seminary and serves as the youth pastor of Indonesian Good News Church. He enjoys telling stories and taking photos. See his work at giovanny.exposure.co. 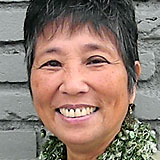 Bonnie Nakasuji is an occupational therapist and attends West Los Angeles Holiness Church where she serves as Youth Choir director. She co-founded Therapy West, which specializes in pediatrics, and teaches at several local universities.