The Danger of a Simplified Whole

Part of 3 of in
By Nora Asedillo Cunningham
Illustrations by Maria Vitan
Apr 01, 2017 | min read
Part of 54: Blend
82 Snaps
82 0 Snaps
Oops! Something went wrong while submitting the form.

The summer before I started high school, my family was in a bad car accident in upstate New York. When we returned home to New York City, we were still nursing a number of injuries from the crash. My doctor recommended that my parents be in communication with my new school to ensure I had appropriate accommodations for my injuries. When it came time to meet with my principal, my dad, who was still on crutches, hobbled his way into school with my mother and I in order to attend the meeting.

I didn’t understand why my mom, who wasn’t on crutches, couldn’t just handle the meeting on her own. Looking at my dad sitting on a bench with his left foot propped up, it seemed impractical to me that he would go through this much trouble. Confused, I asked him, “Why didn’t you just stay at home and let Mommy do the meeting?”

Pausing for a second, my dad exchanged glances with my Filipina mom. “I wanted to make sure you got the accommodations you needed,” he responded, “and it’ll probably help that I’m a white man.”

Not expecting that answer, I let it sink in — challenged to understand that the world didn’t work the way my family did.

My name is Nora Asedillo Cunningham, and I am mixed Filipino and white American. Throughout the course of my life, racism has revealed itself as an evil force that tries to dictate who is deserving of life, respect, and privilege, and who is not.

At our home in Baltimore, I remember hiding from my mean neighbor, and watching her turn her back on my mother who was standing on the porch to defend me. I would then watch that same neighbor greet my dad with a big smile when he arrived home. I remember visiting a doctor’s office in Brooklyn, and being oblivious to the good service I got when I was with my dad — only to realize the same doctor and staff assumed my mother didn’t speak English, and provided noticeably less attention and care with her.

The same doctor and staff assumed my mother didn’t speak English, and provided noticeably less attention and care with her.

Time after time of observing these patterns, my consciousness about racism grew as there was no denying the blatant inequality. Recalling memories can often be hard, because the discrimination toward my mother makes no sense when compared to the image of her that I know. The glaring discrepancies of racism have brought me to the understanding that “in God’s image” and “in the world’s image” are two starkly contrasting ideas. Holding dearly to admiration and respect for both my parents, I have felt at a loss for where I stood on this spectrum of oppression and privilege.

Middle school in New York City was when I first started to be aware of my racial identity, and my classmates usually told me I was white. I had just moved to New York from the suburbs where Black and white faces were the only norm, so I didn’t really know how to respond. For much of my life, the concept of being Filipina had seemed vague and distant. And as family visits to the Philippines got too expensive, my understanding of my birth country moved into my peripherals; I felt like I could never quite see it clearly. I didn’t grow up around many Filipinos except for a few family friends. While I always had my mother, I was never able to understand from the world around me what “Filipina” meant to me.

As I grew into adulthood and began to actively explore my sense of self, I started to feel a call to explore more deeply what that Filipina part was. In 2014, I finally followed that call and moved back to the Philippines. Over the next two years, I experienced an incredibly transformative faith journey.

In the Philippines, I began to find validation and healing for the wounds racism had imposed on me and my family.

Within weeks of living in Manila, I met many people who wanted to tell me how they knew my mom. I heard story after story of the work my mother had done in the life of the church. I heard of her organizing a walk-out of the deaconesses from the church’s annual conference in 1983; despite their dedication and college training to be church workers, deaconesses were not given the right to vote on church issues. I was given copies of the Women’s Formation curriculum she had written. I found out it was still being used as a feminist resource for reading the Bible and understanding Christianity. I heard about her work traveling to the province, documenting stories of faith and resistance from peasant farmers and compiling them into published books. Upon recognition of my mother’s family name, I was greeted even by bishops working with her now as she builds partnerships with churches throughout Asia.

Story after story testified to the commitment, love, and friendship she gave and continues to give — all rooted in her commitment to the radical ministry of Jesus. The stories never stopped. I’d always known she was a force to be reckoned with. But in hearing these stories, I only felt more humbled and grateful to be known as her daughter.

In my two years of living in the Philippines, my understanding of Filipino came into focus as a blessed part of my ancestry. Of course, in most Filipino contexts, I am an “American” with broken Tagalog, a high nose bridge, and paler skin. However, in living and breathing the Philippines as my everyday experience, I developed a spiritual understanding of my connection to the land, the language, and the people.

And even more strongly, I came into the understanding that I am not lacking simply because I do not understand the Philippines as a Filipino, or the United States as a white person. Despite the common opinion that at any given time of day, I must be either/or — Filipino or white — that is not actually God’s intention for me. God formed me not in confusion but in clarity, and the boundary-crossing nature of my existence and experience is exactly who God intended me to be.

God formed me not in confusion but in clarity, and the boundary-crossing nature of my existence and experience is exactly who God intended me to be.

While racism and discrimination have existed in my life as an absurd evil that doesn’t make sense, we also cannot oversimplify or ignore the real and material impacts of race. While my parents are both advocates for justice and goodness, their histories do not begin with these values. For example, the history of the United States in the Philippines is one of colonization, domination, and a continued neo-colonial presence to this day. The Philippines, a country colonized for hundreds of years, is not a country of the timid and submissive, but of resistance, joy, and hospitality.

I returned home to New York in 2016, and began seminary with the question of how my connection to my ancestry, my spirituality, and my sense of God’s purpose for my life could all be intricately intertwined. In one of my classes in my first semester, I encountered “Postcolonial Imagination and Feminist Theology”, a book by postcolonial theologian Kwok Pui-lan, which spoke to me along these lines. In the book, Kwok says, “While I do not wish to undermine anyone’s desire for a meaningful whole, I want to caution against the enormous power of that desire — the lure to shape things into one, unified, seemingly seamless whole. While such a desire may have the positive effect of resisting the fragmented and disjointed experience imposed by colonialism, it may also lead to the danger of reification of the past and the collapse of differences from within.” (Kwok, p. 39).

As a mixed person, I cannot try to define myself as any “meaningful whole”. While my time in the Philippines certainly contributed to me finding parts of my soul that I didn’t know were missing, it also helped me understand that I have always been “whole”. What I seek instead is to strengthen the differences I hold inside me. It is for this reason that I prefer to use my full name, Nora Asedillo Cunningham, including both Asedillo and Cunningham as representations of my heritage. It is why I prefer the term “mixed” over biracial or half Filipino-half white, because my experience is not made of two clean-cut halves, but a blend of all the pieces of my life.

I have always been “whole”. What I seek instead is to strengthen the differences I hold inside me.

In my Old Testament class last semester, we learned about how the Hebrew Bible was created out of materials written in many different time periods, from many different contexts, and in many different voices. In several instances, these sources disagree. Spending time with the text, and studying the seemingly discordant conversation, I came to the understanding that the holiness of our sacred scriptures comes from all of these voices and experiences held in complicated tension. Far from being one book with one message, it is in the multitude of perspectives and opinions that we can see the holy truth resonate.

As Christians, we are called to embrace our differences, embrace our mixes, and be strengthened by Jesus’ promise of justice for all. 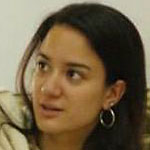 Nora Asedillo Cunningham is a first-year master of divinity student at Union Theological Seminary in New York City. Previously, she served as a Global Mission Fellow with the United Methodist Church, working with youth in Manila, Philippines. She hopes to pursue ministry that brings people together across boundaries, engaging all of themselves into a movement for justice.