The Need for Healing

Whether it’s working with a church or with the foster care system, one thing is clear — we’re all broken people. Jerome Gaw breaks down why he went into social work and how in ministering to youth, he himself also finds healing.

MY JOURNEY BEGAN in seminary studying at Claremont School of Theology, with a motivation to serve through the local church. I did traditional church ministry for about six years, first as an intern, and then as an associate pastor at a Chinese church.

There are certain elements of church ministry that are very uplifting and needed, but personally, I soon found there were some aspects of it I felt were a bit too general, or rather, more general than what I’d rather be doing. I wanted to have more of a community focus. I had a specific sense of responsibility to the needs of people around me, so I went back to school for a degree in social work, which is what I continue to do today.

I specifically work with youth in the foster care system, primarily between the transitional ages of older teenagers, with ages ranging from 15 to 21. Most of them deal with trying to graduate high school and finding employment. Generally speaking, they struggle with trying to figure out what to do with their lives — just like us, but obviously, they face more life challenges.

Many don’t have families or any significant adult connections, and a lot of them also struggle with psychological problems and basic necessities such as a proper education. They need people to advocate for them and give special assistance, so I’m here to find out what they need and support them while they work on getting out of the system.

The challenges of social work

This work can take an emotional toll. You have to maintain emotional boundaries, which isn’t always easy because the work requires personal interaction. Many times, these kids really don’t have a lot of emotional support and I might be the most stable person in their lives, which is scary. At times they can push you away, and you have to learn to not take it personally. Since they’ve been hurt multiple times by adults or peers, they don’t have a reason to trust anybody.

Since they’ve been hurt multiple times by adults or peers, they don’t have a reason to trust anybody.

It’s easy to look down on these kids, citing lack of a family or failures. But the reality is, this mentality says more about me than them. I can’t see myself as above them — it’s not pity, it’s just reality. And the reality is that we all need saving.

I can’t see myself as above them — it’s not pity, it’s just reality. And the reality is that we all need saving.

But it’s also rewarding. You see that they’re incredibly resilient. You see kids overcome things that they previously thought impossible. You see them be strong when you don’t expect them to be because they have to be. This past year, I had three or four kids graduate from high school; it wasn’t easy but they got through it. And in working with them, you learn about yourself from interacting with these kids.

But they are distinct in that with social work, my profession focuses more on just working directly with kids and people. Of course, the church deals with community and does a great job; I’ve learned a lot about community and how that connects with church and ministry. But in an ideal world and in some distinct way, part of this is also every Christian’s responsibility — I think that’s what motivated me to look into this profession. There’s nothing wrong with the efforts the church is making; there are those who work with the church that focus on it and are doing a great job.

The need for healing

My goal is not separate from the goal of the church — it’s simply more specific. It’s to heal and to provide for those in need. Even when I think about my kids, I think, “Whoa, this kid is really hurting. He needs healing.” But the truth is, I need healing too. So that creates a very strong connection with kids like mine, and us as believers.

When my father was working in social care, people would ask, “If you could tell your kids about Jesus, would you?” And he would say “No, they tell me about Jesus.” And it’s true — I learn a lot about what it is to care for people, and to love for no other reason except for the fact that they’re people.

“No, they tell me about Jesus.”

I’m still learning all the time about how to do that. I had to go to one of my kids’ graduations recently, and I was the only one there. That’s a ridiculous responsibility and it doesn’t make me a good person, but it does say something about the situation. This kid had to work hard through about 13 different high schools, and he just managed to graduate under the age of 20. But he didn’t have family or friends, so I was the only one there. It’s hurt and damage like this, that need healing — and that pain is there for all of us. We’re all hurt in some way, and that’s where Jesus comes in.

We’re all hurt in some way, and that’s where Jesus comes in.

The relevance to Asian Americans

Statically speaking, for our age group, with this demographic, there’s a lot of disproportionality; most of our young people in the system are African American youth, so they’re overrepresented. But for Asian Americans, statistically, they’re underrepresented. What that means is, if you look at the reported population vs. the general population, you would think logically if there was 12% of one ethnicity in the general population, it would be the same percentage in the social care system, but it’s not.

Part of it may have to do with our culture. As Asian Americans, there’s a general sense of shame when it comes to issues of mental health. It’s not that there aren’t any abusive Asian American families, it’s just not reported — it’s kept within the family unit. Because of that, it’s possible that some Asian Americans don’t feel that the field is relevant with the questions of, “Why do you need an outsider to handle what’s going on inside the family?”

A big factor may be a perspective of work and individual accomplishment. Many immigrant families work hard for what they have, so needing outside help can be seen as a weakness. There’s a negative idea about families that can’t take care of their own kids, without fully understanding or acknowledging the environmental contribution of difficulties such as property, money problems, etc. And it’s cyclical — if one parent grew up in extreme poverty, they most likely pass it on to the next. All this leads to a negative stigma about mental health and poverty, that it’s not institutional and not individual.

This connects roughly back to how we perceive church and faith, and how it’s based on the individual or the community. We have this mentality of, “If you’re poor, it’s your fault. If you can’t raise kids, it’s your fault, not mine.” And we think if it’s a success, it involves everyone. But if it’s a failure, it’s on you. You develop a sense of self-shame and that you don’t deserve to be helped.

You develop a sense of self-shame and that you don’t deserve to be helped.

Yet it should be the opposite when you think about the Gospel and what Christ did. So much of it was a sense of, “No. All of this is on us as the church. We build each other up and come together to support each other.” An example is how the early church came together and helped the poor because they understood that they were stronger together than individually. And that’s what community is.

A Christian call to serve

I would hope that everyone, regardless of religious belief, would care for those in need. But as Christians — we’re called to do it. It’s our responsibility and our privilege.

I would hope that everyone, regardless of religious belief, would care for those in need. But as Christians — we’re called to do it.

It’s hard but it has its own rewards — I’ve learned what it’s like to be resilient, and what it’s like to not give up. I’ve seen people who, even after life events so horrifying that no person should experience them, find the strength to wake up the next morning and decide to move forward. All this makes me realize that I need strength like them. I need healing and I need grace.

I need strength like them. I need healing and I need grace.

Having a grip on faith makes this easier because I don’t save people. God saves people. I don’t heal people. God heals people. All I can do is trust in God because this isn’t something I can accomplish on my own. How could I? The needs are far greater than I can comprehend. So if this were something I thought I needed to fix, I’d probably just say “Forget it” and walk away. But God redeems people, and fixes all broken things.

When it comes to these kids, I know I’m not “better” than them. I’ve been blessed with more opportunity than most of them, but that’s not because of anything I did on my own. So when I see a hurting person, I know that I am in the same position.

The only difference is that I’ve already experienced the healing and grace that I hope these young children feel too so that they can feel whole through Christ — just like how we feel when Jesus redeems us. 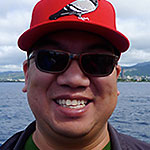 Jerome Gaw is a social worker, serving older foster youth in the child welfare system. In his spare time, he enjoys playing the electric bass.