Ghost Stories and the Power of Colonial Storytelling

“Blonde hair, blue eyes, white skin.” My father gave me an image of who I would marry. See, he almost married a white girl himself. He lived for about five years in the United States before moving back home to the Philippines to become a church planter. He had every opportunity to marry a white girl in the States, but it never happened. Dad told me, “God called me home, and I listened.”

Upon returning to the Philippines, he met my mother. She had darker hair and deep brown eyes, but my dad reflected that “at least she had lighter skin.” She wasn’t as white as his ideal spouse, but “white enough” to satisfy desire. He even used the word mestisa to describe her, a racial term used by Spanish colonizers to classify Filipinas who weren’t fully white but close enough through their mixed ancestry. Still today, mestisa describes the standard of what it means for women to be beautiful in the Philippines, a symbol of colonial mentality.

Driving through the streets of Manila, you’ll see billboards that advertise skin whitening products. Whether they’re drugs that contain the chemical glutathione or papaya whitening lotions, these products continue to shape Filipino imaginations into the lie that Black or Brown skin is malevolent, and white skin is desirable. This is one of the reasons that many Filipinos maintain racist imaginations about Black bodies.

Spanish and American colonizers brought whiteness upon our lands. Today, whiteness lingers as a ghost, and many Filipinos struggle to see beyond it, cursed with an inferiority complex that strives for the white ideal — an ideal that can never truly be achieved.

There is a street in Manila known for a ghost story. Stretching for about a mile across the New Manila district, with tall balete trees serving as a canopy, Balete Drive is a two-lane throughway haunted by the presence of a white lady. According to a variation of a local folktale, she was assaulted and murdered on Balete Drive in the 1950s, but her spirit never left. Dressed in a white gown, with long hair covering her face like a veil, she became the kaperosa, a white lady who haunted the streets in search of her murderer. Many sightings were later reported as taxi drivers and other motorists claimed to have seen her staring at them through rear-view mirrors. Horrified by the look in her eyes, they would abandon their vehicles and run away. The storytellers maintain that, until today, she hasn’t found her murderer. Thus, her haunting continues until she finds him.

Back in the Philippines, the stories of white ladies were told to children in an effort to scare them, like traditional campfire stories in the United States. I remember driving down Balete Drive one day with my father, the story of the white lady ringing in my head. I saw the balete trees standing strong, firm, and ominous as they stretched over me with their shadows.

I did not see the white lady as we drove down the road. Instead, she appeared in my dreams as I went to sleep that night. Folding my eyes at the chance to rest, there she was. Blonde hair, blue eyes, white skin, an image of the woman my father wanted me to marry, a white lady who haunted my sleep. My father wanted me to marry her because he never got the chance to. But today, she remains only in my mind, a horror story of the colonial mentality that cursed my family and my father’s imagination.

Because of the white lady, my parents fought constantly as I grew up. My mestisa mother was never enough for my dad as he desired for our family to become white. I kept hearing about divorces and marital dysfunctions from other families, many of which were due to financial problems. But my parents’ problems were different — money was only peripheral to the real issue.

“I can’t be with your mom anymore,” Dad told me under the shadows of balete trees. “I just want a normal life, but I don’t know if I can have it with her.” He recounted the time he almost married a white girl, and said, “Your mom is simply not as beautiful as her… but I still love your mom.” So as he stared at the hovering cloud of leaves above us, Dad said, “Maybe moving to America will be better for us. They have better churches there, and even better marital counselors. Maybe America can fix us.”

In August 2015, we successfully moved to the peaceful, white suburbia of Dyer, Indiana. At first, it was all very exciting — it was a new place to call “home”. It gave my family a new possibility to root ourselves and promised my father a new beginning.

But unlike Manila where everyone looked like us and spoke like us, Dyer only contrasted my family’s Brownness against the whiteness of those who lived around us. Thus, being in closer proximity to whiteness than when we were in Manila, my dad’s colonial mentality only worsened. Rather than being satiated, he wanted more and more of the whiteness he had already desired.

Just a few years later, my dad left our family to pursue a white woman. He ended up getting rejected by her, causing him to fall into a state of deep depression and anxiety.

It broke me to see him weep and drown in his tears. And it struck me how much my father was in love with whiteness. He was also in love with the American Dream, the possibility of disembodying our family from our Brown bodies. He thought abandoning the Philippines would fix us. But it was only a matter of time until God exposed the broken promises of the American Dream. The white ideal remained merely an ideal, and the white lady continued to haunt my dreams. Because unlike what my dad originally thought, America never healed my family.

For most of my life, the image of the white lady defined my life and existence. It seemed like I had no way out of my father’s dream, forever branded by whiteness. I realized that a lot of my struggles stemmed from the stories my colonized father told: the American Dream, the five years he spent working in America, and the many opportunities he had to marry a white girl. These stories shaped my imagination and my desires.

Though it’s painful for me to reckon with my family’s broken history, it does give me a new possibility to reassess, reevaluate, and deconstruct the stories I’ve been told. Indeed, the power of storytelling surpasses the grandeur of military might or material wealth. I reflect upon the pen of Dr. José Rizal, whom we celebrate in the Philippines as our national hero. His two greatest works, Noli Me Tángere and El Filibusterismo, were novels — stories — that helped inspire the Filipino imagination to rebel against Spanish oppressors and fight for our liberation. As a result of his profound storytelling, we won and declared our national independence on June 12, 1898. And it all began with a story, a story of liberation and emancipation from the West.

If not for the story of the white lady, Balete Drive would have been just as ordinary as every other street in Manila.

Today, as I remember Balete Drive and the time my father and I spent there,  I am in the process of deconstructing the stories of my childhood and reconstructing a new possibility for my future. I am hopeful that the white lady will not remain in my imagination; indeed, she is fading away as the clouds open up for the sun to shine again on Balete Drive. In many ways, a new world beyond whiteness begins with deconstructing our stories, the stories that shape our lives and destroy our communities, so that we may finally heal and recover. And this is God’s work of restoration and redemption: a re-orientation of our stories around the voice of Jesus, whose gospel is one of love and belonging.

Indeed, in Christ, no story is beyond repair. Our stories are being liberated by God who consecrates our lives and experiences, uniting us with divine love. May we rest on that hope and strive for a better future where we can see beyond whiteness, and where the ghosts of our pasts can never haunt us again. 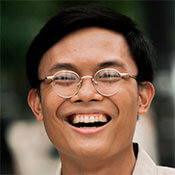 Yanan Melo (he/him) is a writer, poet, and independent musician from the city of Cagayan de Oro, Philippines. He is currently pursuing a BA in Theology from Moody Bible Institute with an emphasis on postcolonial theology and the Filipino context. Follow him on Twitter: @yananmelo 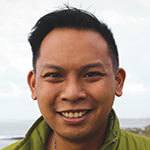 Philippe Lazaro is a climate communicator, a storyteller, and a visual artist. His work strives to promote justice, presence, and hope through a global perspective. As the Communications Manager for the nonprofit Plant With Purpose, he aims to promote rural community development through ecological and spiritual lenses. He also hosts the Grassroots Podcast where he seeks to refocus the climate conversation on the people and communities who are most affected by the crisis at hand. Philippe’s visual art is inspired by lessons from nature, travel, and human resilience. His multidisciplinary approach to storytelling has uncovered a broad array of subjects ranging from the proliferation of Thai cuisine internationally to the false promises of recycling programs. He lives in Southern California with his wife and kids.