This Coconut Cracker is My Body

As a child, I often rubbed the paper texture of the dry cracker during communion and wondered if such a thing really represented Jesus’s body.

Maybe it was the wafer’s ability to create a satisfying “kurrrch” sound as I cracked it — maybe this was what brokenness sounded like, a reminder of Jesus’s broken body and sacrifice before a rushed prayer of thanksgiving and repentance.

Of course, this was quickly followed by a sip of grape juice — a tortuous act for a kid with an unquenchable thirst for juice, hoping that it would wash away the taste of deep-fried paper.

A part of me, even at this age, knew that communion was bread and wine (or grape juice at least), but I often wondered what would happen if they were different things.

A part of me knew that communion was bread and wine, but I often wondered what would happen if they were different things.

I grew up in a first-generation Cambodian Southern Baptist church, which was part of a larger predominantly Caucasian Southern Baptist Church. These were the elements that they used for communion, so these were the elements we used for ours. Still, with the words “Do this in remembrance of me” staring back from the table we placed our elements on, I often imagined seeing the upper room from Acts: an intimate space, perhaps, but more importantly, the breaking of bread in preparation for a meal for fellowship with God and with others.

I began to have a vision of Jesus giving me a personal invitation to dine with Him. At this table, I would be sharing a meal with Jesus, similar to the many family dinners we had at my parents’ home. The familiar scents of lemongrass, kaffir lime, and fish sauce would float to the heavens as the pleasing aroma of Christ that Paul talked about in Corinthians.

Although I’m not one to shy away from any food, given the contrast between our Cambodian potluck and American potluck, I still favored the former rather than the latter. I would continue to wonder why we used stale crackers rather than fresh hot rice? Could not my family’s meal — which represented so much love and care in our family — also be used to usher in communion with God?

Could not my family’s meal — which represented so much love and care in our family — also be used to usher in communion with God?

Our theme at the third national Southeast Asian Leadership Summit (SEALS) in 2010 was called “Deeper Roots, Strong Shoots”. As part of the Southeast Asian Catalyst (SEAC), a group of young Southeast Asian pastors and ministry leaders who coordinate SEALS, our hope was to see attendees explore their personal journeys from historical, cultural, and spiritual perspectives — all in the name of growing deeper as children of God and as Southern Asian people. Our desire was to see them be deeply rooted in their identity in Christ, so that they would bear good and strong fruit.

It was at this particular gathering that we empowered our creative team to think of more radical creative ways to worship. Elizabeth (Chum) Lun, that year’s creative worship leader, and Russell Yee, one of SEAC’s advisors, were tasked with setting the table for communion. In a reflection paper, Russell wrote:

“For the final night of worship, I was tasked with setting the Communion table. Since we were in a borrowed church facility and most of the leaders were from out of town, I had to get all the serveware, food, and drink from scratch. I decided to go to 99 Ranch Market (the local outpost of the largest chain of pan-Asian supermarkets). There was little time and it was raining hard as I pulled into the parking lot.

I found a rack of varieties of sliced bread, all matched for size and shape but all different, which was perfect. So I bought loaves of coconut, taro (purple!), and red bean breads. For the cup, I chose some of the tropical fruit juices. For the serveware, I picked out some Chinese porcelain.

And then I only needed one more thing: some purple grape juice. (I always try to include that when setting out other types of drink for the cup, because I know some people just don’t feel right partaking of anything else at the Lord’s Table.) Now, there at 99 Ranch, where would they shelve purple grape juice? Maybe they didn’t even carry it, and that absence would emphatically make a point about Asian food and drink in relation to Communion. But they did have Welch’s there — not in the main beverage aisle, but right next to all the Coke, 7UP, and other western beverages!

And there you have it: everything I could tell you about minority versus majority cultures in majority versus minority settings, displayed in the way beverages are shelved at 99 Ranch. There I was, literally navigating that cultural border, precisely while choosing food and drink for Communion.Before leaving 99 Ranch, I had also bought a small bag of rice, thinking to maybe decoratively sprinkle the grains on the Communion table.

Everything I could tell you about minority versus majority cultures in majority versus minority settings, displayed in the way beverages are shelved at 99 Ranch.

As I set the table, we spread a gorgeous blue Cambodian tablecloth filled with pretty rows of embroidered golden elephants. I arranged the breads and juices I had bought, along with flowers and some art pieces we had.

We needed a cross somewhere, but I had not brought anything to make one. But in a moment of inspiration, I took the uncooked rice, poured a cup or two onto the center of the table, and shaped the pile of grains into a cross. It was perfect: Jesus, the rice of life.

Later, an older pastor who travels regularly to a country where Christianity is persecuted was checking it out and said, “Hey, this is a great idea, a rice cross — so if the police show up we can just scatter it and they won’t know we were worshipping!”

Since 2010, we’ve carried on this tradition of communion. The elements may change sometimes — it might be coconut wafers, or sticky rice, or red bean filled buns — but the intent is still the same: to partake of Christ’s body in the form of Southeast Asian foods. And we’ve continued to build upon this new tradition.

Every year, SEALS attendees bring clothing from their indigenous people to wear during the last evening when we partake of communion. Imagine the fabrics, patterns, and sounds: The Hmong traditional outfits (khaub ncaws Hmoob), adorned with nyiaj npib (coins), made its own sweet music. The Vietnamese wear silky Áo dài, which often creates a beautiful iridescent glimmering from the worship stage. The Cambodians’ textile patterns on their dresses and shirts often spoke of the intricacy and beauty of all the cultures represented there.

And so we have people ushering in the celebration of the gospel, that Jesus’s body was a sacrifice for all people, in the very clothes that affirm their identity as Southeast Asian peoples. It is a powerful visual reminder that we as Southeast Asian people are, too, made in the image of God — not because we have become more westernized, cultured, or educated, but already in our full entirety.

So we have people ushering in the celebration of the gospel, that Jesus’s body was a sacrifice for all people, in the very clothes that affirm their identity as Southeast Asian peoples.

I’m sure Russell never thought too much about what he did that day, but communion has become such a special event at SEALS for returning attendees. Participants have said that SEALS communion opened up deep self-rediscovery, that God’s redemption of us has more meaning now, and that it is a highlight of SEALS.

I had the privilege of leading communion this year at our most recent SEALS. And as the leadership team carried in tables and set them up, laid out decorations, poured out the coconut and mango juices, and laid out the coconut cracker, I felt like I was witnessing the “upper room” coming together — we were setting the table for Jesus, who had invited us and others to dine with him.

My hope for the body of Christ is not to simply disregard the traditions of our churches but to embrace the creativity of our Creator through the identity of who we are and the cultures we belong to. We should see the importance of communing with our Lord through our familiar heart languages, familiar scents, and sounds. By this, we continue to embrace that it was Jesus’s body and blood that will ever be the only atonement for our transgressions and has the only power to transform every people and every culture. 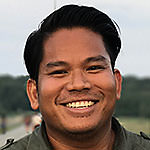 Keomanich “Nich” Khim works as a professional artist in Columbus, Ohio, in various education, ministerial, and legislative sectors. As a mentor and youth minister, Nich spends much of his time reflecting the love and artistry of the Creator to those around him. He has spent nearly 20 years focusing on young people and being a proponent for discipleship, teaching them to love God, themselves, and others. He is also a co-founder of Southeast Asian Catalyst and still remains in an advisory role to the leadership team.