To All Those Who Care

This past fall, my dad was diagnosed with Stage IV prostate cancer. When I got the news, I could barely understand my mom. Hysterical on the phone, she cried for me to move back to California — unable to imagine a world where she was caring for my dad all on her own.

I battled against the idea for weeks. I had just signed a new apartment lease, and after a year and a half of the pandemic, I was eager to restart my life in New York City. But as the eldest daughter in my family, I felt that caring for my parents was expected of me — an attitude that I’ve now learned is shared by 73% of Asian American children. Thanks to state paid caregiving leave policies and the support of my employer, I decided that I would come back to California for two months to care for my dad through his first round of treatment.

Back in California, I felt inadequate as a caregiver. I drove my dad to daily appointments, cooked meals, and ensured that he took his medication on time — but between all of that, I mostly watched episode after episode of TV in my bed, exhausted. Looking back on it, it wasn’t the kind of exhaustion that comes from hard physical labor, but an emotional kind that came from feeling surrounded by old childhood patterns and the uncertainty of human mortality. I missed my life in New York, with its city streets and community rhythms and dinner parties full of laughter and joy. At times, I could think of nothing but wanting to escape from my suburban childhood home, but I also felt guilty for wanting to be anywhere but with my family.

During my childhood, care had primarily been shown through acts of service. Some of my earliest memories are of my mom waking up before the crack of dawn to prepare cut fruit before she left for work, or my dad, an engineer, staying up all night to fix our broken electronics. Because care had been modeled to me as practical actions, I thought that was what I had to provide when caring for my dad. But my best moments of caregiving during this season actually had nothing to do with my ability to cook, drive, or interpret lab test results.

Sometimes, we would go on walks when my dad felt up for it. I would listen as he told me stories of his childhood in Vietnam, of cricket fights and running away to boarding school to play Ping-Pong. His face would light up as he spoke about rooster curry or finding companionship in the only two other Vietnamese students at his college after fleeing to the United States. I saw a different side of my dad in these moments. He was no longer just a cancer patient, but a rebellious child, a survivor of trauma, and someone who had to start all over in the United States.

Life didn’t feel so hard in those moments. We could laugh about a funny childhood story, or I would learn something new about my dad that I hadn’t known before. I believe that these moments of storytelling made him feel more seen and known — less defined by his cancer treatment and more able to express himself with all his life experiences. I realize now that these were the most valuable moments of care that I provided.

Even though there are many practical aspects to caregiving, I think about how in the gospels, Jesus was most often simply present with those hurting and broken. When the disciples were caught in a terrible storm, Jesus walked on water and stepped into the boat with them. He told them not to fear because he was there (Mark 6:47-51). When Jesus saw his dear friend Lazarus dead in the tomb, he wept alongside Lazarus’ sister Mary (John 11:28-35). Sometimes, caregiving just means stepping into the waves, into the boat, and being present in another’s pain — even if it means that we can’t do anything or fix anything.

I left California in December after my dad’s first round of treatment ended. My last day with my family was immensely emotional, and both my parents cried as I prepared to leave. I asked myself, “Would things really be OK without me attending every doctor’s appointment and reviewing every set of labs?” It felt selfish to be leaving my family, still not knowing what the future would hold.

In the end, I resolved to let God take control. I needed to trust that my family would be provided for through other support networks and that things wouldn’t fall apart without me there. I had given what I could, and it was up to God to take care of the rest.

Contemporary Christian culture often teaches us to be generous with our time, our resources, our possessions. We are told to give and give and give until it hurts, or until we have no more left to give. Many Asian cultures reinforce that even more, with a focus on filial piety and prioritizing our older family members. But in order to care, we must refuel.

For a long time, I struggled with questioning whether my time of family caregiving had actually been enough. Most days, I felt exhausted by being around my parents, and no matter how many scientific journal articles I tried to decipher, I couldn’t change the reality of my dad’s cancer. But I gave what I could in that season. And months later, I simply feel grateful that I was present with my parents in our shared pain. 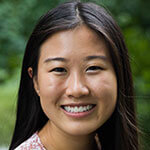 Karen Mac is a second-generation Chinese American woman who traces her family history across Southeast Asia, navigating thetensions of hybrid nationality and ethnic identity. Previously having worked for an advocacy organization focused on building inclusive care policy, she now serves as a strategic communications consultant for nonprofits. She currently lives in Harlem, New York City.