Part of 6 of in
by Chris Philip
PHOTOGRAPHY BY WONHO FRANK LEE
Aug 01, 2016 | min read
Part of 46: Proximity
0 Snaps
0 0 Snaps
Oops! Something went wrong while submitting the form.

It’s easy to assume that the social environment we see day to day is the same reality everyone else must share. Whether it’s growing up in a high school with an East Asian majority or being the only South Asian kid in the entire town, what kind of an effect does it have on a person to be able to look at and be among other bodies that look like theirs?

THERE ARE THREE QUESTIONS I never want to hear again:

It's the last one that really gets on my nerves. India is a diverse nation, featuring a multiplicity of customs, languages, religions, diets, fashions, and genres. In the cut and driest sense, India refers to a set of borders that have never been my home. Ethnicity is often trumpeted as a more nuanced alternative to the social construction of race, yet for myself, I find "brown" a far more accurate descriptor than "Indian". Why exactly am I so apparently Indian aside from my pigmentation?

I've never been a resident of India. I've been there three times.

I don't speak Indian because nobody does; "Indian" isn't a language. I am fluent in exactly one of India's officially recognized languages: English. Hindi was my first language, and I understand some Malayalam.

I am fluent in exactly one of India's officially recognized languages: English.

I don't have a stereotypically Indian first or last name. My middle name is Kelayil, and I can't pronounce it.

I'm not Hindu. I attended an India Pentecostal Church, or IPC, until I was 25.

The list could go on, but I'll desist before the stereotypes get ugly. People who are not me classify me significantly differently than the way I do. I took a quick poll of my co-workers to see which contextual clues they would use to determine someone's ethnicity if they weren't allowed to ask. Aside from the typical (appearance, appellation, accent, apparel, affiliations, affinities, etc.), they mentioned a criterion apropos of the 21st century: self-identification.

In contexts where there are more shades of people but less who look like me, it's easy to forget that I'm not white, even when my skin is peripherally visible. At work, I have as many as two "Indian" coworkers out of a staff of nearly 30. At church, my sisters and I are the sole "Indians" out of 400-plus congregants.

However, I'm unavoidably reminded of my brownness at home as I live with five other brown people. Until preschool, every significant person in my life was brown. I moved from Queens, New York to Lakeland, Florida as a 2-year-old, and I've lived here ever since. Even in a town of about 100,000 people, there were three churches of the same denomination (IPC) within two miles of each other, and I had attended all three at some point.

Compare that insulation to my middle school, where there was one other Indian in my grade — a Hindu, Gujarati-speaking Patel (we had more differences than similarities). I was miserable, but doubly so because my family split off from our church. I was worshipping with people I didn't really know or want to know. I made "friends" who were more like necessary acquaintances. Right and wrong had seemed as obvious as up and down before, but being surrounded by people who didn't share my values left me questioning everything.

I was worshipping with people I didn't really know or want to know.

Unconditional love is a difficult concept for me (and, I'd imagine, for anyone who has tiger parents). When I came home proud of a 98 percent on a test, my parents would ask what had happened to the other two points. If I won the most awards in my grade, I'd be lectured for not winning them all. I suppose I could have interpreted that as my parents' extreme faith in my abilities, but I ended up feeling like a perpetual disappointment. I let my bitterness blind me to their tenacious love — they weren't touchy or sappy, but they had every opportunity to disown me and did not.

What I could not accept from my parents, I learned to receive from my brown childhood friends. I wasn't as they'd remembered or expected, but I never had to audition for their affection. Following my first breakup and consequent suicide attempt, I was utterly convinced that my life was meaningless and hopeless. I was too young to drop out without my parents' permission, so I tried to flunk out instead. My friends wouldn't let me, however; in A.P. World History, they would intercept my homework, complete it left-handed to mimic my illegible handwriting, and turn it in under my name.

I rejected God when I realized I could never be good enough. I had been saved and baptized — the son of a pastor and the star student in Sunday school — but I had completely missed the point of the gospel. I came to God because I was running from hell. When I was sure I was already in hell, God was no longer necessary.

I had been saved and baptized — the son of a pastor and the star student in Sunday school — but I had completely missed the point of the gospel.

One of these childhood friends pestered me week after week to attend her church. Finally, I gave in, fully intending to go, hate the experience, and never have to deal with her invitations again. Instead, I heard about a God I'd never conceived of. The pastor spoke from Micah 6:8 and conveyed the sobering reality of child slavery in relation to chocolate production. We'd cared about missionaries and the persecuted in our IPC churches, but the emphasis was always on the suffering endured by brown people. Here was a white man talking to a primarily white church about sacrificing comfort food to help out dark-skinned strangers. He was interested in both their physical and spiritual well-being, and he was willing to invest his time, energy, and influence into doing something about it.

I was in love. This was a God I not only could, but had to follow — a God of justice and compassion, not an angry bureaucrat or a knock-off Santa Claus. I didn't need to be good before I came to Him, because it was only by His grace that I could be good in the first place. Christianity wasn't about heaven or karma anymore; I found a Person.

This was a God I not only could, but had to follow — a God of justice and compassion, not an angry bureaucrat or a knock-off Santa Claus.

Yet going back to my IPC church in Lakeland was a letdown. I felt trapped in a time capsule: What worked in Kerala, India decades ago was inflexibly imported here and now. Services were still three hours long and 75 percent in Malayalam. Unmarried college graduates were considered "youth" whose opinions were to be ignored. Evangelism was for full-time professionals in India. It was hard to invite non-brown, non-Christian friends: If the service was unintelligibly boring to me, how much more so would it be for them?

In undergrad, a handful of us would gather together regularly for "Indian dinners". We didn't necessarily fit into the culture of a college town, even the Christian culture, but we had each other. One particular conversation revolved around whether or not we'd want to hand down the language and customs to our children. I was the lone "no" vote — I didn't care if the culture died with me; I'd prefer to be culture-less entirely.

My sisters and I now attend a predominantly white church. Going from a church of 20 members to a church of 400 was culture shock enough, but being the only brown folk gets isolating at times. Don't get me wrong: We're in a good place — the right place, more importantly — but there's a sense of detachment I didn't expect to feel.

Culture is fallen because people are fallen, not the other way around. I was born into this geosocial context for reasons I don't understand, but for reasons nonetheless. If I'm the only person who thinks I'm not "Indian", does it matter? I firmly believe there will be a day when ethnic backgrounds are no longer divisive, as Paul suggests in Galatians 3:28. Until then, I defer to my Maker. I was fearfully and wonderfully made brown. I don't love it, but I can live with it.

I was fearfully and wonderfully made brown. 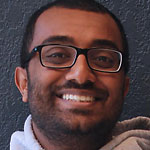 Chris Philip is not really Asian or American, if you ask him. He received his bachelor of arts in Criminology from the University of Florida and has used it exactly zero times since.