Examining what it means to be peacemakers in our secular society

LOOK AROUND and it’s not hard to find — everywhere you step, everywhere you go, everywhere you glance. Whether it’s the television documenting warfare on foreign soil, the newspaper reports highlighting political factions and issues dividing our nation, or even our own personal experiences of tensions and arguments at home — it pervades our world. It’s everywhere.

Even internally, we experience it constantly, as we are plagued by competing thoughts, desires, and emotions. We are torn between living our lives for God or for man, for our parents or for ourselves, according to Western ideals or Eastern values. The list goes on. Conflict is all around us and there’s no escaping it.

Conflict is all around us and there’s no escaping it.

If you listen carefully, though, in response to the rampant presence of dividing walls throughout our society and even within ourselves, you can hear our souls crying out — for a better world, peaceful and unified.

This isn’t how things are supposed to be, we hear.

Identity markers such as race, socioeconomic status, or sexual orientation divide people. It’s common news that celebrities are in feuds, public figures are making insensitive remarks, and high school students are bullying each other online and at school. We even have the term “troll” to describe people who are purposely antagonistic in digital spaces.

Clearly, our world is in constant conflict.

In such a world where our culture is becoming increasingly secular and divided, what is the solution? How does peace play a part in it all? And, as people of faith who are called to be people of peace, how are we called to tear down walls between the divided factions and build bridges in their stead?

As people of faith who are called to be people of peace, how are we called to tear down walls between the divided factions and build bridges in their stead?

Throughout the Bible, there are glimpses into the answers of these questions. Oftentimes, throughout many texts, biblical scholars refer to the Hebrew word of shalom as a picture of how God intended the world to be — where we as humans are right with God, each other, and the world. This idea, that is very fundamental to the Christian faith, encapsulates the restoration that Jesus sought to bring to the world through His death and resurrection.

If you look deeper into the origins of the word shalom, the word doesn’t just mean peace in the way we see it today. Instead of a warm, fuzzy feeling inside, or the absence of conflict, the word shalom in the Hebrew context has connotations of justice, righteousness, and right relationships.

Thus, to bring shalom — to bring about peace — requires us to be people of both justice and reconciliation at the same time. Not to err on one side or the other but to balance them both. Not to cry out for justice without making attempts to bridge the groups involved. Not to reconcile groups and have them coexist — but to seek justice and prevent the perpetuation of systemic hurts as they work in harmony with one another.

Seek justice and prevent the perpetuation of systemic hurts as they work in harmony with one another.

How Peacemaking Plays Out Today

In March 2011, former University of California, Los Angeles (UCLA), student Alexandra Wallace released her “Asians in the Library” video, in which she made derogatory statements about the Asian student population — the Asian and Asian American community at UCLA had a choice in how to seek peace and respond.

The community was torn between seeking solely reconciliation or solely justice in the incident, and it became evident that the campus needed an expansion of their definition of what it meant to pursue peace. Even among the Asian and Asian American community, there was division in how to find a solution and seek peace on campus.

Even among the Asian and Asian American community, there was division in how to find a solution and seek peace on campus.

On one end of the spectrum, there were students, staff, and faculty calling for Alexandra’s expulsion, for retribution — for justice. Violent threats to Wallace’s life, vicious parodies of her video, and even more derogatory name-calling ensued, as people urged the UCLA administrators to act and to punish Wallace for her hurtful comments.

On the other hand, there were groups, many of them Christian-based, who were calling for Wallace’s forgiveness, for the extension of grace to her — and to move on from the incident — without seeking to acknowledge and address the hurt she had caused many on campus.

All in all, in seeking peace at UCLA, each side was missing a piece of God’s peace. Where one side solely desired retribution and lacked a desire to seek restoration between the parties involved, another segment of the UCLA community sought only a shallow version of harmony on campus and lacked a desire to right the systemic injustices and hurts brought to light. Thus, any attempts at peace from either side would have been lacking or insufficient — and not shalom.

At University of California, San Diego (UCSD) in 2010, a similarly divisive situation occurred on campus. The “Compton Cookout”, a frat party that exploited the stereotypes of African Americans through its theme and events, created a huge division between the black student population and Greek community, as black students were hurt over how their community was being mocked and portrayed.

Amazingly, in response, it was only through the involvement of the Christian community on campus that peace was found. Peace could not have resulted, had it not been for the InterVarsity students who sought justice and protested alongside the black community at UCSD, while also seeking reconciliation between both parties involved.

Rather than purely calling for justice and for administrators to penalize the fraternity students involved, InterVarsity staff and students were also a driving force in seeking reconciliation on campus, as they created a cultural awareness training to equip all UCSD students to be culturally sensitive and competent, a course which each Greek student had to complete to become a full-fledged member of their chapter.

Our Role as Peacemakers

When we think about our own lives, what keeps us from bringing shalom to those we meet? Maybe we don’t believe systems of injustice can change if we act, don’t want to get too involved in a situation, or perhaps we (frankly) don’t care. What is it that blocks us from being peacemakers?

In 2 Corinthians 5, Paul called the Church to be a ministry of reconciliation, to be peacemakers wherever they go. Truly, we need to reclaim that ministry and identity in His name.

Imagine what could happen if we as a Church didn’t ignore the conflict and hurt pervading our world, but instead chose to respond to it.  If we chose to get involved, to get in the messy conflicts, and to bridge peoples, groups, and nations. If we chose to bring both justice and reconciliation to our world, that is in such desperate need of it. Imagine the impact we as a Church could make.

To pursue peace, though, as we are called to do so in Ephesians 2, requires us to actively tear down walls and build bridges in their place. To do this, we can’t just sit and watch conflicts ensue, nor can we side with only one party involved. We must actively engage both sides, attempt to address the systemic injustices keeping them apart, and also foster relationship between them.

We can’t just sit and watch conflicts ensue, nor can we side with only one party involved.

Only then are we seeking true peace in our world.

Only then are we taking steps toward the solution, toward shalom, toward the ministry to which Jesus has called us in this world.

Jehovah Shalom, our Prince of Peace, would You guide us as we seek to embody Your peace on earth and bring peace, justice, and reconciliation to all those we meet. Amen.

Here are five tips for how to go about peacemaking today: 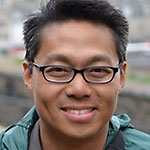 James Choung has been involved in campus ministries for over 18 years. He currently serves as InterVarsity Christian Fellowship’s national director of evangelism, and also leads a missional community called the Vineyard Underground.