LOOKING DIRECTLY INTO HIS EYES, I smiled and greeted him as warmly as I could. "Hi, Isaac!" No response. He was fixated on something else, his eyes gazing into a world unknown.

After a few more timid attempts to grab his attention, I finally gave up. Stepping back, I observed him in his backyard sandbox. He carefully grabbed a handful of sand and watched the minute grains of grit and gravel sift through his fingers. He studied the shower of sand with the intense gaze of a scientist, his head tilting ever so slightly. I was foiled by something so much more interesting — sand.

I love playing with children, and I think children like me. But when I met Isaac, I was at a loss. I didn't know how to act or what to say. Which one of my go-to moves would score that heartwarming laughter? How could I make him like me? He seemed to have no interest in me.

In all honesty, before I met Isaac, I had no real opinions or feelings about people with disabilities. I didn't see them, and they weren't part of my social circles. I didn't even think they were that relevant to my faith. This all changed when I married my wife, Rachel, in 2014.

She's a behavioral therapist — someone who teaches people how to live within social norms — and I didn't anticipate that "two becoming one" was a literal phenomenon. Her world of working with children with disabilities encroached on my world of theology and philosophical musings.

At first, this unlikely union made for interesting conversation; Rachel's daily recounting of violent tantrums, silly stories, and frustrated parents were a launching point for contemplation about child development, nature versus nurture, or the ultimate theological question of "Why does God allow this?" "Disability" was a mere abstraction, a weighty concept that could be picked apart and put back together again in a way that made sense to me.

But then Rachel had to go do something that directly involved me in her passion for children with disabilities. "Stop your talking and do something," she told me.

Rachel helped start a respite program called "rEcess" through our church, where parents could find a safe place to leave their children for four hours and have some overdue personal time. Meanwhile, their children with special needs could play and find rest from their endless therapies and simply enjoy being who they are.

With the start of rEcess, I was no longer allowed to just mentally agree with the virtues of ministering to those with special needs. Essentially, Rachel pulled me into her world, and disability became flesh.

Disability became flesh through my interactions with parents of children with special needs. I listened to parents share their former dreams and expectations, of how their child was going to be an academic whiz, an athletic superstar, or any "next big thing", really. I heard how these dreams had faded into resigned hopes, that their child would at least make some friends, at least get a job, or at least be able to live independently when their parents wouldn't be around anymore. I saw the pain in these parents' eyes as they watched their child stick out in a group of "normal" children who were chatting, socializing, and hitting developmental milestones.

Disability became flesh when I interacted with children with special needs. rEcess began with just one boy from our church, Isaac. Isaac is a handsome, 4-year-old boy with big soft eyes and a growing body built for running and climbing. He loves racing his scooter furiously through the neighborhood and devouring snacks like a competitive eating champion. Rachel and I became close with Isaac's parents, and I began to develop a connection with Isaac.

Or at least I was trying to. Since my first sandbox rendezvous with Isaac, I had gained a basic understanding of autism, heard countless anecdotes from Rachel, and had gleaned what Isaac's favorite toys, songs, snacks, and games were. The next time, I approached him with a plastic baggy of "copcorn" and began singing one of his favorite songs.

"The wheels on the bus go round and round ... " I enthusiastically sang.

"No fanks!" He refused my popcorn offering without a glance, and promptly returned to hugging Rachel. "Tickle, please!"

I did everything I could to gain Isaac's attention and love. Isaac loves to swim, and my apartment had a pool. We invited him and his family over, and Isaac went about his favorite pool activity: jumping in for the big splash over and over again. As he attempted to climb out of the pool for another jump, he looked up at me and sweetly asked, "Help, please."

My heart leaped at the chance to bond with him; I helped him out of the pool over and over again until my arms were numb. But the next time we met, I didn't even receive one glance of recognition.

I was surprised at how entitled I felt to his love. I had earned it fair and square. Despite all my efforts, Isaac was functioning outside the rules of love — at least, the way I knew how to love. But after countless failed attempts at bonding, I stopped trying to figure him out and just watched.

I watched the way Isaac interacted with his parents and Rachel, the three people he thanks God for in his nightly prayers. He doesn't love them just because they press the right buttons and say the right phrases. Isaac may not be verbal enough to express his thoughts and feelings through words, but that doesn't mean he doesn't have them.

Isaac picks up on what we might call social faux pas and uses them as his own delightful expressions. Having seen Rachel's reaction when he shouted "Boobies!" as he pointed as her chest, he now knows how to get a good, if not awkward, laugh from everyone around him. And I can't deny the clear language of love Isaac communicates as he cups Rachel's cheeks in his hands and kisses her on the lips. His parents now call me "Rachel's other lover".

Over time, I've realized that Isaac is not an equation to be solved. He is flesh, simply an individual with his own preferences and moods. I had expected that I could do and say the right things to get the kind of love he shows his parents and Rachel.

But in reality, Isaac is the same as anyone else who chooses to not respond to my friendly gestures. He might just not like me. He probably sees right through my calculating actions and would rather spend his time with someone who will love him for him. In fact, I might even argue that Isaac's disability has given him the unique ability to refuse to play the social game of quid pro quo that we all learn from a young age — I give you this and you give me that, and we'll say we love and care about each other.

But through my interactions with Isaac, I've learned that's what happens when disability becomes flesh. All my expectations are thrown out the window. All the rigid categories of autism and diagnoses and symptoms bend into the contours of a living human being to whom my reality and expectations must yield.

My relationship with Isaac has changed the way I see God and fellow human beings. I've been learning to loosen my grip on my cherished theological systems through which I filter my relationship with God. I'm more willing to yield to God made flesh rather than the God of my theology. With that, I've been able to truly see and value the flesh of humanity, the image of God in my fellow inner-city teachers of different color, beliefs, and sexual orientation. My mostly Latino students are no longer statistics and cultural characteristics — they are diverse individual expressions of the face of God.

Isaac still doesn't respond to me, but tomorrow is another day I get to build my relationship with him. Because disability became flesh in Isaac, Isaac has made me more human. 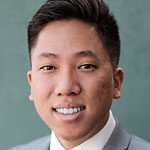 Eric Choi is a math teacher in Los Angeles and is currently finishing a Master of Education at the University of California, Los Angeles. He graduated from Talbot School of Theology with a Master of Divinity in 2015 after earning his B.A. in history and study of religion at UCLA in 2009. He loves UCLA, hamburgers, LEGOs, Net ix, and his wife, Rachel.