Where is My Home?

America. Taiwan. Korea. Having immigrated to different countries at various stages in their lives, Hwalih and her sister find that home was never in any of these countries.

DO YOU EVER WONDER what it would feel like to become instantly blind, deaf, mute, paralyzed, and brain-dead — all at the same time?

Or how about this: Starving after a 12-hour flight to a foreign country, you walk into a restaurant only to realize you cannot read the menu. You end up ordering seafood, which you are allergic to, instead of chicken. After eating this overpriced meal and developing the worst case of hives, you realize you don’t know how to get to the pharmacy, much less the hotel. And within hours, you feel like a complete idiot, dreading the rest of your trip. You cannot decide whether to laugh or cry about this ridiculous show you just put on for the natives.

An immigrant experiences all of these things — only for them, it’s permanent. After two traumatic immigration experiences, my older sister Jamie and I were convinced we would never leave America again.

Ethnically, we are half Korean and half Chinese, but we were both born in America. Overwhelmed with the stress as an immigrant and bound to a husband she could not communicate with, our mother became severely depressed and took her own life when we were young. Our dad, conflicted with the financial and parental burden of taking care of two young daughters that he couldn’t communicate with (as he only spoke Chinese), made the painful decision to send us to his home country of Taiwan, to be cared for by his sister.

Days after our dad left us — without warning — we were told not to speak Korean or English to each other, so that we could learn Chinese faster. Unsurprisingly, we experienced the full effects of the education system’s harsh punishments because we did so poorly in school. Our eyelids and ears were pinched, and our hands and bottoms were hit until we couldn’t see, hear, write or sit for days! Needless to say, our fondest childhood memories were not in Taiwan.

To add another twist, after three difficult years in Taiwan, we were able to return to America as “reverse immigrants”, but this time, we only spoke Chinese! We were teased for our “fobby” clothes, accents, and hairstyles. We worked hard to re-learn the American language, culture, but I feel like we never fully restored that identity.

We worked hard to re-learn the American language, culture, but I feel like we never fully restored that identity.

A TIME FOR GROWTH

We both met Jesus in our 20s and served at a church in Maryland. We became content with “The American Dream” of getting married, climbing the corporate ladder, and living in a suburban home. Yet, over the years, God never failed to whisper in our hearts, “Many are the plans in [your] heart, but [I determine your steps]” (Proverbs 19:21 NIV).

Over the years, God never failed to whisper in our hearts, “Many are the plans in [your] heart, but [I determine your steps].”

It was in our late 20s when we were convicted to move to Asia. We wanted to join the incredible movement of God there. But at the time, we were caring for our ill father, so we knew the timing just wasn’t right.

Our dad had developed chronic obstructive pulmonary disease (COPD), due to years of heavy smoking in an attempt to relieve the pain of his wife’s suicide along with leaving his daughters in Taiwan. By 2012, after a 22-year battle with this lung disease, with only 20% lung capacity, it was a miracle to the doctors that he was still alive. When the doctors said he didn’t have much time left, we were challenged with the decision of his end-of-life care.

So we decided to fulfill his dream of living in California. We took a four-day train ride to move to San Francisco. And though our time in the Bay Area was short, we made some sweet memories with our dad. After three months in California, he contracted pneumonia and went to be home with Jesus on New Year’s Day of 2013.

Our dad’s death changed everything about our perspective of “home” and “citizenship”. Confident that our parents were now both “home” in heaven with Jesus, we knew it was time for our move to Asia. Although we knew we were sacrificing the potential for marriage and a comfortable life, America just didn’t feel like home anymore.

Our dad’s death changed everything about our perspective of “home” and “citizenship”.

Instead, we both had the opportunity to join the pastoral staff at Lifespring Church, a young international church located in Songdo, South Korea. Reverend James Byun and his wife, Heather, planted Lifespring with a vision to use the English language to reach out to foreigners in Korea, to be a bridge among Asians in unreached nations. In October 2013, we packed our entire life’s possession into six suitcases and moved to our mom’s home country.

We were immigrants for the third time. Many people asked us why we moved, and our answer was always, “His call and the promise of His Presence” (Matthew 28:18-20; Exodus 33:14).

For my sister and me, immigrating to a new country as children, teenagers, and now as adults, has convinced us that our true home and citizenship is in Heaven. Jesus, a citizen of heaven, modeled the immigrant life for us when He left Heaven to save us on Earth. Modeling Christ, we chose to give up the comforts of being an American and to come to Asia — as citizens of heaven.

Our true home and citizenship is in Heaven.

The word “pontiff”, from the Latin “pontifex” (synonymous with priest), comes from the root words “pons” (bridge) and “facere” (to make). That literally creates the term, “bridge-builder.” Jesus, as the ultimate high priest, serves as the bridge between God and us (Hebrews 4:14-16). In 1 Peter 2:9, we are called “a royal priesthood”. As citizens of heaven entering Korea, we embrace our priesthood call as “bridge-builders” to link the lost to their Father by sharing about the greatest Bridge Maker of all — Jesus Christ.

In this third immigration experience, we are back to square one. We’ve needed help for the smallest things — from getting a cell phone, using taxis, buying groceries, even ordering coffee at Starbucks! We are challenged to be totally dependent on Him. We rely on God to see, speak, hear, move, and think. Our daily life indeed has become a blind, deaf, mute, paralyzed, and brain-dead two-person comedy show for all around us!

However, His sufficient grace in our weakness gives us courage to persevere (2 Corinthians 12:9). All the hardships of an immigrant life are worth it because we are now confident that we are at the center of God’s will. With His Presence surrounding us, and clinging to the hope of our heavenly home, we hope to be empowered to lead the lost to Jesus Christ — their bridge home.

We hope to be empowered to lead the lost to Jesus Christ. 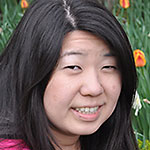 Hwalih Han is a Chinese-Korean American who was born in Delaware, but spent most of her life in Maryland. She has professional experience as a clinical research nurse. Currently, she resides in Korea with her sister, Jamie.