A Marriage of Differents

“I’m in an interracial relationship.”

I remember the moment I heard those words. I was sitting on my girlfriend’s couch as she talked on the phone with her parents, and she had just — after three months of dating — stumbled upon that revelation.

I laughed a lot in that moment, which was largely a reaction of incredulity, though perhaps it also covered up a little indignation. Isn’t it fairly obvious when you’re in an interracial relationship?

The simplest answer is yes, I suppose. But just like it might be obvious if you’ve been baptized but it’ll take you a lifetime to unpack what it actually means, what it means to be in an interracial relationship is a whole different question.

It might be obvious if you’ve been baptized but it’ll take you a lifetime to unpack what it actually means.

In the four years since that day — a period in which my girlfriend became my wife and my interracial relationship became my interracial marriage — I’ve learned a lot about Carolyn, about who we are, and about what God is doing in us. But perhaps how I’ve grown the most has been in discovering who I am.

The simplest answer to the question “What are you?” is “Asian American”. It’s most currently accurate. I’m 100 percent Chinese and an American citizen. So, technically, that makes me Asian American.

“Asian American” doesn’t tell you how I came to faith or that I was baptized in a Southern Baptist church in Hong Kong, where the pastors were from the U.S., but the congregation was made up of mostly Hong Kongers, with a dose of Filipino migrant workers, and a handful of American, Australian, and British expatriates.

“Asian American” doesn’t tell you that I studied in England for eight years, coming back to faith through a charismatic church in London after a few years of spiritual drifting; or that at one point I even thought I might live there for the rest of my life.

In fact, “Asian American” is the answer I’ve given for only about 11 years — since 2006, when I moved to California to attend Fuller Theological Seminary at 23. That label was the one that fit the best. But it doesn’t tell the whole story.

"Asian American" was the label that fit the best. But it doesn’t tell the whole story.

How I’ve thought about relationships, particularly romantic relationships, has been inextricably intertwined with how I’ve thought about myself. It seems pretty intuitive and obvious now that who I am affects how I relate to others, but when you’re in the middle of a situation or when things aren’t yet resolved, either personally or relationally, very little seems intuitive or obvious.

For as long as I had thought about romantic relationships, I’d had a desire to be in an interracial relationship. I wouldn’t necessarily have always articulated it that way; I don’t think I would have been able to in first grade, when my first crush was a half white, half Chinese girl. I probably still wouldn’t have been able to in college, when my first girlfriend was white.

In my 20s, I learned a lot about who I was and about the world around me. First, I learned that many Asian American men are least likely to marry outside of their ethnicity. I wondered if those cultural forces had anything to do with not having any dating success with the women I found myself interested in.

Second, I learned about standards of beauty propagated by Western commercialism and Hollywood’s global reach. I wondered if I was unconsciously being shaped by all of that, desiring to marry a white woman as a symbol of achievement.

I wondered if I was unconsciously being shaped by all of that, desiring to marry a white woman as a symbol of achievement.

Third, I learned that I might be a Four on the Enneagram, with a need to feel special. I wondered if that had something to do my feelings about interracial relationships and being different, or wanting the spotlight. (I'm actually probably a Two, which renders this thought moot!)

I also learned I have a tendency to overanalyze things.

But in trying to understand who I am and how I relate to others, I learned more about the history of race and interracial relationships in America, and people’s attitudes toward those things. I became friends with other Asian Americans, and I discovered something new about God.

I discovered the story of Chinese slaves working the railroads and Japanese internment camps in World War II; the Chinese Exclusion Act of 1882, which was the first law limiting a specific ethnicity from immigrating to the U.S., a law that wasn’t repealed until 1943; and the case of Loving v. Virginia, which, in 1967, finally invalidated laws against interracial marriage.

Moving to California also brought me into contact with my first Asian American friends. I didn’t really have categories for understanding myself or this complicated world until I became friends with other Asian Americans — learning the language of immigrant generations, bonding over the similarities in upbringing even across oceans, and sharing a common commitment to regularly eating dim sum together. And that understanding grew deeper still when I acquired Asian American Christian uncles and aunts, big brothers and big sisters, folks who asked me challenging questions about what it meant for me to be Asian and American and Christian; and when I entered church ministry, what it meant for me to be an Asian American pastor in a multiethnic, multicultural church.

All of that happened as my growing faith grounded the disparate strands of my identity not in American citizenship but in a heavenly citizenship, as the apostle Paul wrote in Philippians 3. I was identifying with those the writer of Hebrews described as “foreigners and strangers on earth ... longing for a better country — a heavenly one” (Heb. 11:13-16 NIV). And I was learning to see my home as defined not by a place of origin but by God; all the while fully inhabiting the skin and the story God had given me. I remember reading Revelation 7:9 (NIV), which speaks of the day when a great multitude from “every nation, tribe, people, and language” will gather to worship God together. My heart leaped as something deep within me resounded with an “Amen” to this divine vision of reality.

I was learning to see my home as defined not by a place of origin but by God; all the while fully inhabiting the skin and the story God had given me.

“You have to know who you are so that you know what you’re bringing.” A pastor friend said those words to me. And it’s true in a church community as much as it is with a relationship. Knowing the baggage I carry — the chip on my shoulder, and the scars I bear as a result of being a Hong Kong-born, London-educated, Chinese American pastor — and how they all impact my marriage are just as important as knowing the positive experiences and traits I bring to our marriage.

Carolyn and I are about as different as two people can be: in our background, in our culture, in our politics, in our temperament, in our life experience. And over the last four years, there has been plenty of opportunity to teach her more about Chinese culture, about life as a minority, about cultural sensitivity, and about the history of faith and race in America. I’ve tried to institute a shoes-off policy in our house with varying degrees of success. I’ve loved showing her around Hong Kong, introducing her to my family, and challenging her to try food she’s never eaten before.

She, in turn, has helped me navigate and come to love her say-whatever-you-think family; how to deal with conflict healthily instead of avoiding it; and how to take an actual vacation instead of feeling guilty that I’m not using my time efficiently. I never learned how to argue well until I met her, and it’s something I’m still learning. She’s teaching me how and where she sees God, as I do the same for her.

It’s easy for me to think of myself as the cultured one, the learned one, the one who has more to teach. In some ways, it’s true that, as a minority, I’m already used to navigating a predominantly white world, code-switching with ease to fit into majority culture. But in another, more substantive way, we’re learning from one another. We’re creating something new together after all: a relationship that serves as a sign and foretaste of the multicultural, multiethnic kingdom of God, which unites people across lines of color and origin and family background and political party, while celebrating the wonderful diversity with which God has made us.

We’re creating something new together after all: a relationship that serves as a sign and foretaste of the multicultural, multiethnic kingdom of God. 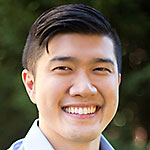 Justin Fung serves as the Pastor of Teaching and Formation at The District Church, helping to create a culture where everyone learns how to live and love like Jesus. Previously, he worked in advocacy with ONE and Sojourners. He is a diehard supporter of the Seattle Seahawks and Arsenal Football Club. He lives in DC with his wife Carolyn and their goldendoodle Asher Russell Rodgers.