A New Way to Relate to Rest

I ALWAYS ASSUMED I knew what Sabbath and rest looked like.

I had a mental picture of solitude and silence, one that revolved around the idea of retreating — either into nature or into your own private space. Rest for me­ — especially as an introvert — meant taking a break from being around people and activity. Then my world turned upside down.

Rest for me­ — especially as an introvert — meant taking a break from being around people and activity.

It was an afternoon like any other when my mother called me, informing me that my father still hadn’t woken up.

After a couple hours in the hospital, the doctor told us that my father had suffered a massive hemorrhagic stroke, and there was only a mere 10 percent chance of survival. For the next 18 hours, I sat in a chair next to my father’s bed, praying desperately that the next hour’s nurse evaluation wouldn’t be his last. It was a night of utter shock and many tears — the longest night of my life.

My father did survive, but the following months took a toll on me. As usual, I responded by isolating myself.

In my pain, I didn’t want to open myself to even more vulnerability. I recall being unable to bring myself to pick up when a good friend called to check in with me. I would draft emails to ask for prayer, but be unable to hit the “send” button. This was my pattern from the past — during times of great stress, my defense mechanism would be to retreat. I couldn’t see relationships as a lifeline; they felt like a threat.

During these months, my family gathered around my father and mother in support. My aunts put their lives on hold to come and help with logistics and offer emotional support. My conversations with my sister got me through that rough time.

It was then that I had a strange realization. Our entire family was exhausted from helping my father, and we had no personal space or breaks from the endless list of tasks. Yet, we all felt the peace of being connected with each other and knowing we were all in this together. This realization energized me as no amount of sleep could, and motivated me to keep going.

My father’s rehabilitation process helped me rethink the way I understood the meaning of rest. I began to question my assumption that rest was about solitude and inactivity, and started to wonder what it might look like to find rest in community. What might it look like to emerge from time engaged with people and feel more energized than if I had just spent time by myself?

What might it look like to emerge from time engaged with people and feel more energized than if I had just spent time by myself?

This question was not new for me; it had come to light several years earlier when I became a new father. My first weeks were a fog of sleepless nights and diaper changes as I tried to adjust to a new lifestyle of constant responsibility. I stayed mostly at home, feeling the depression of not knowing who I could talk to.

My wife finally challenged me one night, asking, “How will your friends know your struggles and what you need if you don’t tell them what’s going on?” She encouraged me to call my best friends and simply ask them if we could talk once a month.

“How will your friends know your struggles and what you need if you don’t tell them what’s going on?”

It was hard to pick up the phone, but that one phone call started an informal group of four friends who have talked every month for the past four years, despite being in different continents and time zones. Because we are so regularly in touch, it only takes minutes to catch up on our lives, and we have a safe place to email when we have a hard day or urgent prayer need.

With this group, I’ve learned to take risks in sharing my deepest fears, feelings, and insecurities. I’ve let my friends truly know me, and they have done the same for me. I’ve learned to ask for acceptance and grace. Through the intimacy of knowing and being known by these friends, I find rest.

I’ve let my friends truly know me, and they have done the same for me. Through the intimacy of knowing and being known by these friends, I find rest.

Neither intimacy nor vulnerability is easy, either in Asian or American circles. It can be regarded as shameful or a sign of weakness. I’ve talked to hundreds of Asian Americans whose parents never talk about their past and struggle in fear of being a burden. I remember telling my own father, “You are not a burden at all! I just want to know who you are.” After that, he shared many stories of his childhood struggles, and I could feel the closure and peace that came as he finally let his feelings out.

How many precious stories and emotions like my father’s have been kept inside for generations and are waiting to come out? Can we truly be at rest unless we are willing to open our doors to greater intimacy?

My community of friends has also taught me that true rest happens when responsibilities and burdens are shared with others. This came up during the aftermath of my father’s stroke, when I needed my family in more ways than I could have imagined to stay afloat.

Allowing others to help can be counter-cultural. I grew up learning the value of hard work and self-sufficiency. I felt immense pride when I earned good grades throughout high school and college, and felt immense shame when I entered vocational ministry and had to ask others to support me financially. I remember one distant relative asking me at a family gathering, “So when are you going to quit your charity and get a real job?”

It took something as countercultural as fundraising to help me rest in the knowledge that I didn’t have control over every penny I owned, much less my entire life. I began to see that no one is truly self-sufficient, but we’ve been given the gift of relationships and community to share the loads and burdens of life, much as Moses learned to entrust others with leadership as a result of his father-in-law’s advice (Exodus 18:13-26). How much peace can come as we rest in knowing we are not alone — nor were we meant to be!

No one is truly self-sufficient, but we’ve been given the gift of relationships and community to share the loads and burdens of life.

What brings rest to our souls? We certainly need solitude and breaks from activity to recharge, especially if we’re involved in ministry or working in a capacity that focuses on serving other people. However, so much of what we truly long for is to be known by people, and to know we’re not alone.

I think of Jesus in perhaps His greatest hour of agony and need, as He sat in the Garden of Gethsemane sharing His deepest struggle with His heavenly Father. Although His closest friends couldn’t stay awake, Jesus kept returning to ask them — three times — for the support He needed. Although He knew Judas would betray Him, the God of the universe chose to live in close quarters with and to be known by twelve friends. Inviting others into His life was not an act of weakness, but a powerful act of love. What an amazing example for us!

For too much of my life, I’ve struggled to be in touch with these deepest needs of mine, and I didn’t know how to go about getting my needs met. Moreover, I faced numerous cultural barriers and taboos. It is my hope and prayer that future generations of Asian Americans would know that they are not alone, but that they are known and loved for who they are.

It took my father’s near death experience for me to learn this. May it not take a crisis for you to slow down and see what really matters in life — relationships. After all, on the sixth day of creation, God said, “It is not good for man to be alone” (Genesis 2:18 NIV). So He gave us the greatest gift of relationships and community. And then on the seventh day, God rested. 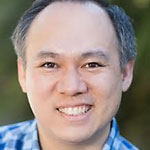 Adrian Pei works in leadership development for Epic Movement, the Asian American ministry of Cru. He loves creating new ways for people to see and experience God’s kingdom, especially through writing and innovation. He lives in southern California with his family.