Part of 3 of in
By Lisa Asedillo Pratt
Illustrations by John “Enger” Cheng
May 05, 2018 | min read
Part of 60: Here's the Thing
88 Snaps
88 0 Snaps
Oops! Something went wrong while submitting the form.

When they graduated, my father indeed chose to follow her to the Philippines, learn how to speak the Tagalog language, and become deeply involved in the human rights struggle she was involved in. They got married in Manila, and I spent a good deal of my childhood in the Philippines. In many ways, this land raised me.

I had a gang of friends in our apartment complex and played with them every day after school. We didn’t have fancy toys, but our childhood playworlds were rich, imaginative, and integrated with the land.

I remember running through fields searching for dragonflies, climbing trees for fruit, and sharing my bicycle with the neighborhood kids (if anyone owned anything special, it was usually shared). I remember making paper dolls, paper doll clothes, and paper doll houses in cardboard shoeboxes. I remember trading stationary with some of my girlfriends (we each had our own folder of different kinds of paper we’d collected, and one of our favorite hobbies was to trade and barter). I remember competing in running races with the neighborhood kids, and how we’d always run barefoot across the dusty cement ground — much better for grip than our tsinelas (flip-flops). And I remember speaking Tagalog and living inside the thought-world of the Tagalog language. Memories of my childhood in the Philippines sustained me once we moved to the United States when I was 8 years old.

In the United States, my dad became a United Methodist pastor and was appointed to serve in a predominantly white suburb of Baltimore, Maryland. In this time, a sense of racial strangeness and invisibility began to pervade my daily life.

I remember feeling shame about “not knowing the right way” to do things — I didn’t know the Pledge of Allegiance and could hardly read it on the glossy laminated paper on the wall. I didn’t know how to use a number line in math class. I had a strong accent that some of my classmates mocked. I often got words confused. My backpack was of a batik tribal print, while everyone else’s was JanSport or L.L. Bean. I didn’t own a pair of jeans. I didn’t get cultural references.

I eventually realized this wasn’t accidental. As Leny Mendoza Strobel notes in her classic text, “Coming Full Circle: The Process of Decolonization among Post-1965 Filipino Americans”, “Although the U.S. colonization of the Philippines in 1898 played a critical role in the way the U.S. defined itself as a world power, today, very little remains known and remembered about the far-reaching consequences of this relationship.” She points out that Filipino Americans have always been regarded as an “invisible” or “silent minority”.

This is no accident, Strobel assures us: “Powerful master narratives have constructed it.”

The year 1898 is often referred to as the dawn of the U.S. empire. It marked the beginning of the Philippine-American War where thousands of Americans and more than 1.4 million Filipinos died. U.S. President William McKinley’s stated purpose in the Philippines was “to educate the Filipinos, and uplift and civilize and Christianize them, and by God’s grace do the very best we could by them, as our fellow men for whom Christ also died.” Filipinos did not hear the same message from God, however, and rose in revolt against American rule in February 1899 as they had many times before against the Spanish.

There were four Black regiments on duty in the Philippines, and according to the record, an “unusually large number” of Black troops deserted during the Philippine-American war. David Fagan was the most famous Black deserter — he apparently “accepted a commission in the [Filipino] insurgent army and for two weeks wreaked havoc upon the American forces.”

Filipino rebels often addressed themselves to “The Colored American Soldier” in posters, reminding them of lynchings back home, and asking them not to serve the white imperialist against other colored people.

H.L. Wells, a correspondent for the New York Evening Post, wrote in 1900: “There is no question that our men do ‘shoot [Filipino] niggers’ somewhat in the sporting spirit .... The soldiers feel they are fighting with savages, not with soldiers.” At that same moment in history, between 1889 and 1903, on average, two Black people were lynched by mobs in the United States per week.

Drawing on scripture for moral interpretation of the importance of communal solidarity, the book of Corinthians offers a compelling vision: “That there may be no division in the body, but that the members may have the same care for one another. If one member suffers, all suffer together; if one member is honored, all rejoice together” (1 Corinthians 12:25-27). Galatians adds: “Bear one another’s burdens, and so fulfill the law of Christ” (Galatians 6:2).

These visions cast Christian acts of solidarity as a divine calling to bear one another’s historic and present burdens and claim responsibility for one another’s well-being. This calling transcends boundaries of biological family and culture.

Now is a time for shaping change through interracial solidarity and social change movements. A number of assumptions often occur, however, when the topic of Asian American engagement in the racial justice struggle is broached. One of these assumptions is that Asians are entering a conversation that’s not ours — Asians are somehow “guests” in the American racial justice conversation, and we have to be polite.

A third assumption, caused or exacerbated by the “model minority” trope, is that Asians entering the conversation are at least partially to blame for racism and white supremacy. We enter guilty. Model minority stereotypes position us as a racial wedge fueling competition rather than partnership among communities of color. Internalized anti-Black racism in Asian American communities marks us as suspect and as racial traitors.

But Asians are not “guests” in the racial justice conversation. This conversation has been ours since the invention of “Asia”. Since the first colonizers stepped foot on our shores. Since the Manila Galleons. Since the Chinese transcontinental railroad laborers. And internalized white supremacy in Asian American communities cannot be adequately understood without reference to U.S. and European militarism and imperialism in Asia, internalized colonial self-hatred (often referred to as “colonial mentality”), ongoing neocolonial politics, and U.S. cultural hegemony that continues today. A solidarity breakdown occurs when anti-Blackness, for example, is rendered an inherent problem of Asian American identity rather than as an institutional, historic illness caused by violent and complex histories that must be named, healed, and undone.

Asian American Christians are called to the work of racial justice solidarity. We are called to learn our particular and shared histories, build critical consciousness in our communities, and cast an internationalist vision of resistance against all forms of oppression. Since its conception in the 1960s, “Asian American” has always been a strategic, political identity deployed for the purpose of forging intra- and interracial alliances to build a world of justice.

We cannot succumb to invisibility and voicelessness. We must bring our particular stories, contexts, and histories to the dialogue, and rise up to shape social change. Our very existence gives us permission. Our faith demands it. And in the depths of our being we know: We are stronger together. 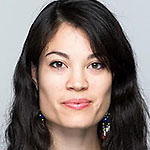