Clinging to Hope During Uncertainty of the Japanese American Church

I grew up on a steady diet of Saturday mornings, pajamas, and cartoons. My brother and I would wake up as soon as the sun shone through the blinds. Together, we’d run to my parents’ room to ask them if we could watch TV.

My favorite characters were always the underdogs: the ones who weren’t the best or those who were counted out. These characters stood out to me because they had to hold onto hope and vicariously gave hope to those who felt like the underdog. Many parts of my life have been defined by such hope. In almost any situation, I can cling to it. Most of the time, this hope comes from God, but often it comes from friends, family, or a fresh perspective.

When I decided to enter seminary in 2012, I clung to hope. I had no idea why God had called me or what I was doing there. All I knew was that I wanted to help reverse a problem that I had become increasingly aware of — a lack of young, Japanese American pastors.

I had no idea why God had called me or what I was doing there.

I knew that seminary was my starting place, where I could begin to address this problem. At that time, I thought a semi-revival would soon occur within my caucus, the National Japanese American United Methodist Caucus, a group of Japanese American churches within the United Methodist Church. I had imagined that this revival would cultivate new and young Spirit-led leaders to invigorate our caucus. But this doesn’t seem to be the case as numbers still dwindle and churches continue to struggle.

As my caucus is at the cusp of changing leadership, things seem uncertain. There are very few Japanese American pastors to fill pastoral roles. Of course this doesn’t mean that people of other ethnicities can’t fill these roles.

But the lack of young, Japanese American pastors means that the unique perspective from the intersection of Japanese American culture and faith is endangered. It dulls a voice that needs to be sharpest today, which says, “What happened to our people won’t happen to you and your people.” Whenever the slightest whisper of internment tries to draw breath, the Japanese American perspective can recognize it immediately, speak against it, and try to stamp it out. This perspective cries out for social justice — especially when racist-based fears attempt to gain a foothold. It says that prejudice toward a group of people won’t be tolerated.

I fear that with a diminished pool of young, Japanese American pastors who are a product of internment, their voice that which draws together faith, justice, and culture will become jumbled and inarticulate.

I remember talking with a third generation German American and explaining how throughout my life I had felt the need to prove my American side. I did this from the standpoint that American culture was the ideal that despite the color of my skin and the shape of my eyes, I could fit. I had subconsciously set an expectation that I felt I needed to live into.

She responded with something that I will always remember: “Even though your family has been here longer than mine, I never had to deal with those thoughts because of the way I looked.”

The future of Japanese American churches seems uncertain, making my role uncertain as well. As a hopeful future pastor of these churches, I wonder what the Japanese American church will look like in 40 to 50 years. I wonder where God is leading us and what role I will play in that future. Some leaders within my caucus refer to our churches as the “historic Japanese American Church”. This is an effort to remember our past, but it also looks toward a future with greater diversity. We can grow, but we will need to grow differently than we have in the past. While looking to the future, the lessons and the road that led us here must not be forgotten.

Embedded within Japanese American history are the internment stories. The unique testimonies of first and second generation Japanese Americans (issei and nissei), whose perspectives shed light on the ugliness of prejudice and wartime hysteria, have driven our tradition of storytelling. These are stories that need to continually influence the character of our culture until it becomes contagious. These stories need to shape, mold, and embolden those in and outside of the Japanese American community to stand up against injustice toward those whose struggles are similar to the struggles of the issei and nissei. I hope that as a caucus, we can take this tradition and use it to permeate the culture of the Church.

This story needs to be owned by future generations, of not only Japanese Americans, but all Christians who care about justice. The legacy of the Japanese American church must live on through the ways the Church should respond to and care for the stranger. Our story should scream out that never again will a group of people who may sound, look, talk, or believe like our “perceived enemy” be rounded up without human rights or justice. The Church has a much louder voice than my small caucus and can amplify this message of solidarity to millions more than the Japanese American church alone could ever reach.

This is the hope that I have for the Japanese American legacy within Christianity. Even though I still sometimes selfishly hope for a new generation of young, Japanese American seminarians, clergy, and pastors to arise, I have to remind myself that I’m only called to be faithful to what God is doing. It’s still a struggle because it feels lonely. But I’m not short on hope and will continue to live my life with God-given hope. I will carry on the hope of the Japanese American church and pray that its story seeps into the narrative of the larger Church. Our small but distinct voice may be an underdog or counted out, but we can cling to hope. 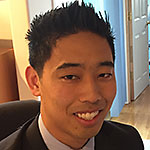 Eric Iki is a fourth generation Japanese American (Yonsei) who serves as a youth and young adult director at Faith United Methodist Church in Torrance, CA. If he could, he would spend more time fishing, being in nature, and not worrying about life. He also believes that pineapple does belong on pizza and doesn’t care if you think otherwise.