Part of 3 of in
By Erina Kim-Eubanks
Photography by Aaron Huang
Jan 01, 2016 | min read
Part of 39: Departures
0 Snaps
0 0 Snaps
Oops! Something went wrong while submitting the form.

You were crowned not with laurels from Zeus' temple
But with thorns, piercing your skull deep.

You received not the scepter of Caesar's authority,
But cruel beatings from the reed —
Bitter lashes to the back,
Nails thrust in your hands and feet

You were clothed not in robes of Roman royalty
But were stripped
Naked —
Your broken body bare and exposed,
A spectacle for the world to see.

With crowds gawking, leisurely watching,
You wore the vestments of a criminal,
Not a king.

Traded away your honor for coins,
Cast lots to determine who would keep your robe
Divided up the last fragments of your dignity.

You were a victim of mob violence —
Falsely Accused,
Wrongfully Convicted,
Shamefully Exposed.
You hung on the cross, a symbol to the world
of what happens when you challenge Rome;
When you agitate, you trouble-make
and bow down to a Kingdom not of this world.

A day that exposed the evils of man
When terror would reign, violence would win
Darkness would fall,And lament was our song.

The Chinese Massacre of 1871
The Trail of Tears, filled with disease and starvation

The day Eric Garner cried out “I can't breathe."
Each day a dead child is left fo(u)r hours in the streets.

Each blow, each death,
An act of treason
Against a God whose loving hand
Formed every person
As bearers of the Imago Dei.

The day they crowned you King of the Jews
Was a day we must never forget.

Your crucified body forever a reminder
of a God clothed in suffering,
a Lord wearing our shame and sorrow
and a King whose exaltation comes
through the throes of human grief.

They may have taken the clothes on your back
But they could not steal your divinity.

Tags:
Black Lives Matter
Read the rest of the series
No items found.
0 Snaps
0 0 Snaps
Oops! Something went wrong while submitting the form. 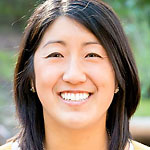 Erina Kim-Eubanks is currently the Northern California  eld director for Prison Fellowship Ministries, helping mobilize churches to seek restoration for those affected by crime and incarceration. She is passionate about the intersection of racial justice, restorative justice, and criminal justice. She lives in Berkeley, CA, with her husband, Michael.